Here in the scrub vegetation on dunes along the coast and in thin soil atop limestone the agaves are abundant, and many are flowering. Above, you can see how thickly they grow in a picture taken across coastal strand vegetation toward a ship loading salt at Las Coloradas about 20kms east of Río Lagartos. Attention must be paid when you walk through that vegetation because the agave blades are tipped with hard, sharp spines, shown below: 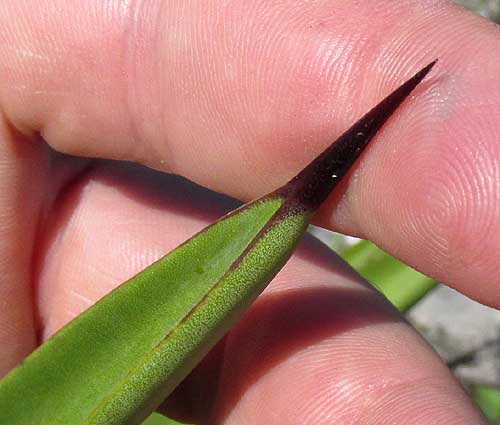 Even the blades' margins can rip your skin or clothing, as is clear below: 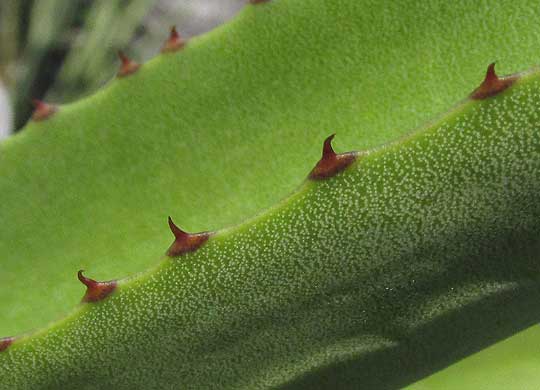 The big panicles of flowers atop their well defended bases are more welcoming to air-borne pollinators, but to attain the nectar down inside the flowers the bats who pollinate them have to penetrate a cloud of long, stiff stamens and styles, as shown below: 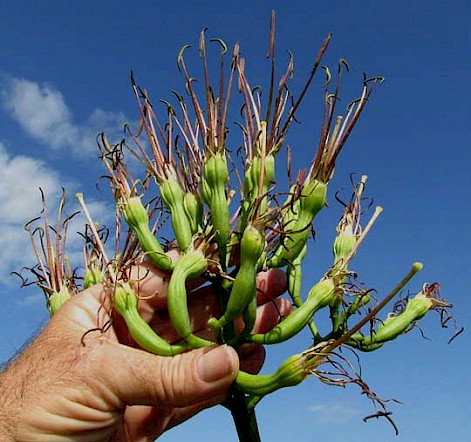 It's generally said that agaves with panicle-type flower clusters growing in tropical arid zones depend on nectar-feeding bats for pollination, while species in the temperate zone are pollinated by diurnal and nocturnal insects and birds, so our bat-pollinated species agrees with that notion. Each flower produces six stamens composed of slender, stiff filaments topped with curving anthers attached at their backs. Amidst each stamen cluster there's a short, thick style tipped with a roundish stigma, where bats are supposed to deposit pollen from other flowers. These details can be seen below: 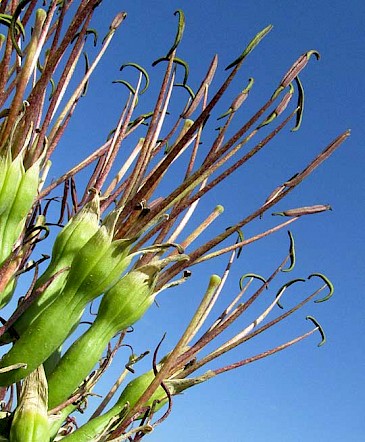 This is AGAVE ANGUSTIFOLIA, often known as the Caribbean Agave, distributed from Costa Rica north to arid regions of northeastern Mexico, including all of the Yucatan. In Mexico the species is famous as the usual source of commercial mezcal, mezcal being Mexico's main traditional booze. Sometimes other agave species are used for mezcal as well. Mezcal is different from Tequila. Tequila is distilled mainly from the juice of a different species, Agave tequilana, and is generally regarded as more upscale than mezcal.

Our Caribbean Agave has been cultivated for so long that several important cultivars have been developed, including some that are important sources of fiber -- though most commercial agave fiber comes from yet another species, Agave Sisalana. Numerous ornamental cultivars of the Caribbean Agave are planted throughout the world, including 'Marginata' with white blade margins and a particularly pale form often called Agave Angustifolia Woodrowii.

This article is adapted from Jim Conrad's Naturalist Newsletter. Jim is a naturalist with years of experience observing the ecology of the Yucatan Peninsula and beyond. The following article is adapted from the November 30, 2014 Newsletter issued from Río Lagartos, on the north-central coast of Yucatan, Mexico. You can find the original article on backyardnature.net
All images and text at the backyardnature.net website, unless identified as produced by someone other than Jim Conrad, are copyright free, in the public domain. 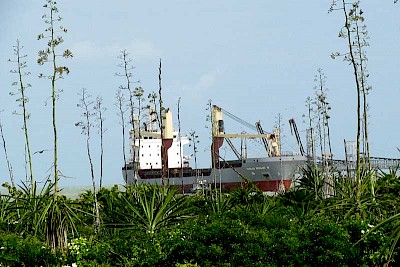