A Place for Spider Monkeys

I don't think it's any secret that my husband loves monkeys. I mean really, really loves them. For some kids, the wish every year at Christmas is for a puppy. Others, like me, become obsessed with horses. For Rob, it was all about the monkeys and it's an interest he has held onto even into adulthood.

You can imagine my delight when, in the process of planning a spectacular weekend to celebrate my sweetie's 40th birthday, I stumbled upon some interesting comments on the web about a spider monkey sanctuary just down the road in Chemuyil! This mysterious habitat, The Jungle Place, sounded like just the right kind of unforgettable destination for Rob and the kids, Birdie, Connor and Cole, to enjoy together on his birthday.

I had made previous arrangements with the owners, via email, several weeks in advance and was told the best time to interact with the monkeys would be in the late morning. So, off we went traveling south on Highway 307 from Playa del Carmen, and just 35 minutes later made the right turn into Chemuyil. The Jungle Place, or Kuxi Kaax in Mayan, is easy to find; it was just another 3 minutes or so past the pueblo. We pulled in, crept down the narrow, winding driveway surrounded by beautiful palms and flowering plants and quickly arrived at our destination. I couldn't help thinking how strange it was that we have lived in Playa del Carmen for nearly 4 years and I have heard barely a whisper about this amazing place. The owners, Heidi and Joel, were waiting and welcomed us to their home, a home they share happily with 13 rescued spider monkeys!

We exchanged greetings with Heidi, Joel and Linda, a primatologist and educator on an extended visit from Washington State. We each shared a bit of our respective histories, where we are all originally from, how long we have lived in Mexico and what drew us here, all within just a few feet of an enclosure which rivals those of most modern zoos. As it turns out, at one time, Joel and Heidi had grand plans for a beach house. Then they were "bit" as they say, by the "monkey bug" and the house on the beach turned into a home on 20 acres of jungle interwoven with cages, paths and bungalows.

During this time, the monkeys were sizing us up, listening to our voices, watching our body language and becoming accustomed to our presence from the shelter of their cage. Joel quietly introduced each of us to the monkeys and then, finally, it was time to enter the enclosure. Joel took the lead and calmly guided Rob, Birdie and Cole into the large habitat set up for the female spider monkeys. I chose to stay outside and document the encounter with poor Connor, battling la gripe, who was not allowed prolonged close contact with the monkeys. Primates can catch whatever virus we may introduce but have no way to battle the illness and may ultimately die from a simple cold.

We also learned it is also dangerous for the monkeys to come into contact with many of the chemicals used in sunscreens and insect repellents. While Heidi does provide a wonderful all-natural bug cream, she has also painstakingly planted the entire property with lemon grass and other naturally repellent plants which keeps their home and the monkeys' cages mosquito-free! We never saw a single bug during our visit. And we were amazed at how clean the monkeys were. Even in this close proximity, they had no odor at all. Joel showed us their secret: they "bathe" themselves using the oils from lime leaves! That is just one indication that these monkeys are quite obviously happy and healthy. Another indication is that one of the females gave birth last year to their first "baby" conceived on-site. Spider monkeys, like humans, mate by choice. Then the mother will tend to her off-spring diligently for the first 4 years, shunning all advances from interested males.

I can only hope that my pictures tell the story because to say that this experience was magical does not come close to doing it justice. Rob and the kids were in the enclosure interacting with the monkeys for over an hour! The smile on my husband's face as these playful creatures climbed him like a jungle gym, eventually falling asleep on his shoulders and in his arms, was priceless. The monkeys seemed to regard Birdie and Cole as two of their own and busied themselves trying to untie shoe laces and remove hair-ties from their new friends. The children were instructed to try not to show their teeth when they smile as this is perceived as an act of aggression (one we would see later while visiting the males). Sweet Birdie couldn't help but grin ear to ear and spent most of the time with one hand firmly clamped over her mouth!

Then, just as suddenly as they had attached themselves to Rob and the kids when they entered the cage, the monkeys retreated to their respective areas in the enclosure and settled in for a mid-day siesta, leaving the humans to chat about daily life and routines at The Jungle Place. We learned why there are spider monkeys that need to be rescued. Each of these monkeys has been rescued from abusive owners or found half-dead from neglect. Most people have no idea how much work a monkey is and when the cute baby monkey grows up and gets to be too much work, they dump them in the jungle. The monkeys don’t know any better and gravitate toward populated areas, where, if they are lucky, Heidi and Joel are called to retrieve them. Monkeys raised in captivity cannot be released into the wild, as they will not be accepted into another group of monkeys and will starve on their own. Many of the monkeys at The Jungle Place are actually mentally unstable from their years of neglect in captivity. Somehow, Heidi and Joel have manage to support this huge endeavor from donations and bungalow rentals. It's not easy, and in fact one of their jungle cottages, now named "The Unfinished Symphony" remains half-done, abandoned after Hurricane Wilma all but destroyed this precious refuge. Funds raised from visitors to the sanctuary will help them to finish this remarkable guest cottage and secure space for more vacation renters, whose rental payments help support the monkeys.

Heidi and Joel were thrilled to find out that we are friends and supporters of the Peanut Animal Shelter in Playa del Carmen, and we promised to put them in touch with owners Andy and Jen to help build their network of supporters. The lifespan of these fragile creatures is actually 30 to 40 years and they have no chance of survival outside of the care and security provided by Heidi and Joel and The Jungle Place. This endeavor is truly a lifetime commitment.

After a bit of conversation and exploration of Heidi and Joel's amazing palapa home, we went to visit the male monkeys playing in another section of the labyrinth. The monkeys are given plenty of room to jump and swing in enclosures that reach over 30 feet high. Despite the great environment, many of these poor creatures have been so abused and malnourished that they will never fully recover emotionally. It was interesting to see the vast differences in personalities and mannerisms and to be able to clearly pick out which ones are "not all there", so to speak. Despite repeated warnings to stay out of the reach of long monkey arms, I managed to get too close to Chucky, who got ahold of my hair. Unlike the playful females who may tug at your hair out of curiosity, the males are aggressive, strong and they are playing for keeps. My scalp is still tender!

As our visit drew to a close, we reluctantly bid our farewells, promising not only to return soon, but to get the word out to as many locals and visitors as possible.

So here's the word: If you have children, this is an experience not to be missed. Even if you don't have children, but you love the Yucatan for all of its exotic flora and fauna, this is an opportunity to observe and preserve a small piece of that unspoiled beauty and support a worthy enterprise. Looking for a way to take in the natural resources of this region? In search of an outing that is more authentic and economical than Xel Ha or Xcaret? Why not spend a morning with the spider monkeys, take a dip in the nearby cenote Xunan Ha, grab a delicious pizza-to-go at Leo's Pizza in Chemuyil and then spend a lazy afternoon on one of the most beautiful and remote stretches of beach in all the Riviera Maya: Xcacel. I guarantee you will come away with the feeling that you experienced some of the best of what Quintana Roo and the Yucatan Peninsula has to offer to its more inquisitive and adventurous visitors.

The Jungle Place is located 35 minutes south of Playa del Carmen. Travelling south on highway 307, turn right into the main entrance for C.D. Chemuyil. Continue on past Calles Puma and Hormiga until the road ends at a “T”. Turn right and continue on for about 3 minutes on an unpaved road. Look for the large wooden gate and entrance to The Jungle Place on your left. Admission is $15 USD or $150 pesos per person.
Arrangements to visit the sanctuary or to reserve a bungalow must be made in advance with Heidi or Joel via email at info@thejungleplace.com.

Editor's Note: Michele Kinnon writes for her own blog, Life's A Beach, about her experiences on the East coast of the Yucatan Peninsula in Playa del Carmen. Thanks for sharing, Michele! 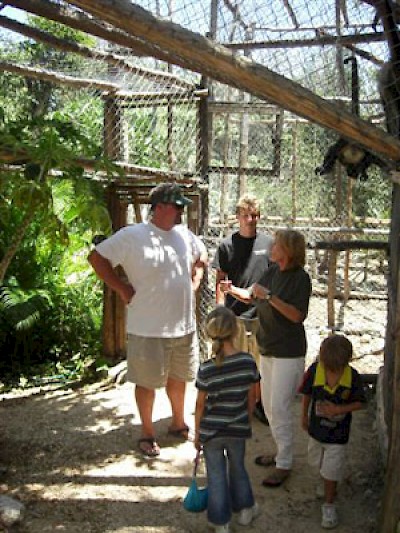 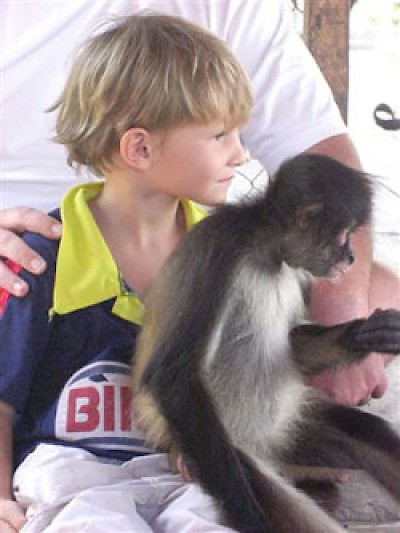 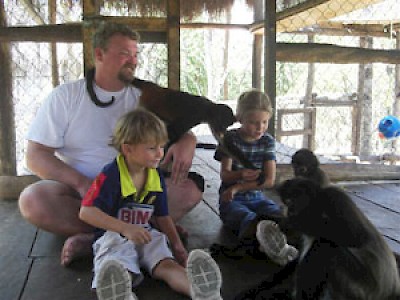 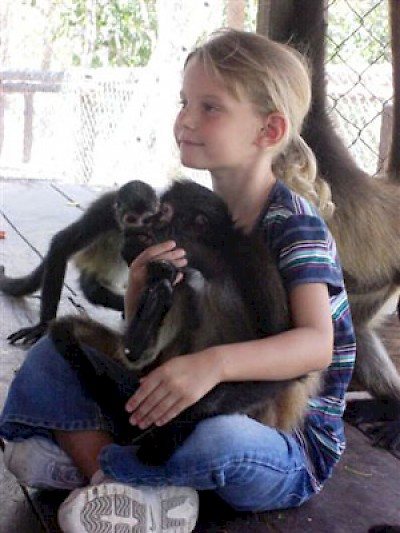 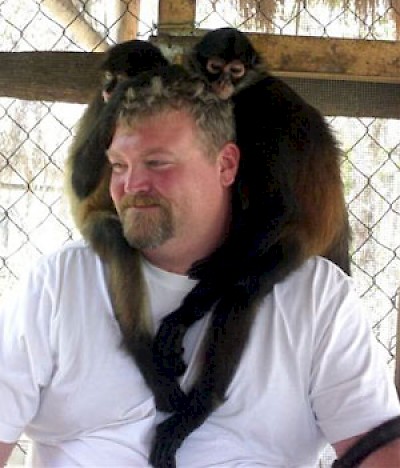 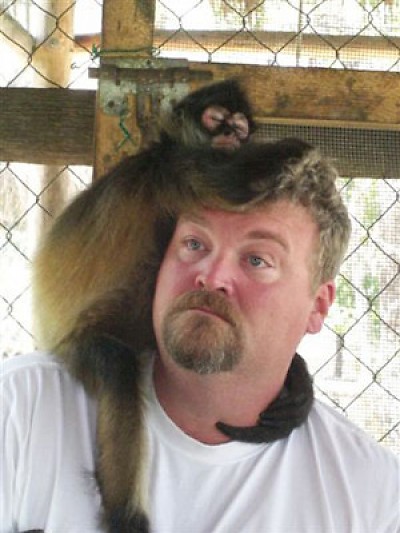 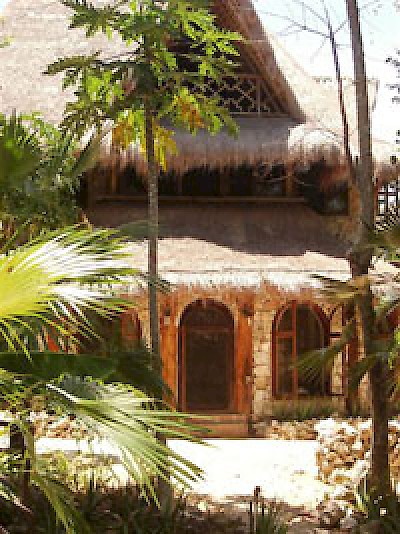