Friday I found Luis busy working in the traditional Maya milpa, or cornfield, planting "camotes" (ka-MOH- tehs), or sweet potatoes. Maya sweet potatoes are unlike what we have up North. In the picture the tubers are upside down, with the roots on top, and the long thing at the far left is a stem bearing a couple of small, heart-shaped leaves. Luis said that he'd just buried some tubers much larger than the big one in the picture and that Maya sweet potatoes come in colors of white, yellow and purple.
The Northern sweet potato is IPOMOEA BATATAS, a member of the Morning-Glory Family, the Convolvulaceae, and this is the same thing, just one of the many variations of that much-cultivated, native tropical American species. In the online Flora de Veracruz, Andrew McDonald describes the species' tubers as white, yellow, orange, purple or red, and ranging in form from turnip-shaped to narrowed on both ends (fusiform). Of the species' complex genetics he writes that it's hexaploid, and that it hybridizes with closely related diploid species forming tetraploids, and that it produces populations exhibiting intermediate morphological features.
Next Luis showed me Jícama beans he'd carried from home in a plastic bag and was about to plant. They're below: 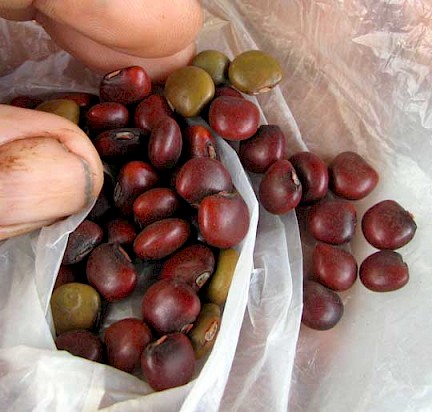 Jícama (HEE-ka-ma) is sometimes referred to in English as Yam Bean. It's PACHYRRHIZUS EROSUS, a member of the Bean Family, native to Mexico and Central America but much planted in the tropics worldwide for its starchy, highly edible tubers.
Next Luis showed me Chayote fruits he'd just planted at the base of a small, dead tree, which later the rampant Chayote vines will climb up. They're shown below: 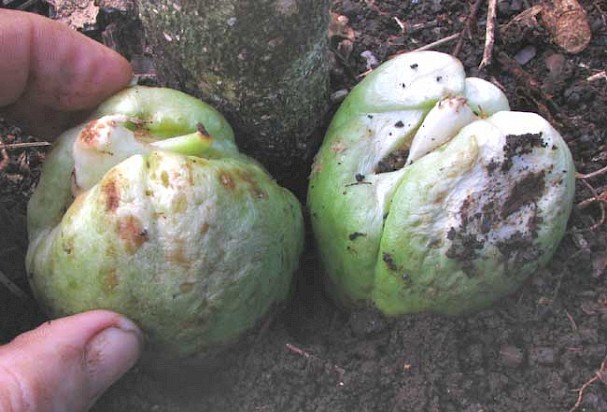 Chayote is SECHIUM EDULE. I read that in English sometimes it's called Christophine but I've never heard that name. It's a member of the Cucumber Family. In the picture the things looking like sticking-out tongues develop into shoots that form much-branching vines that can completely cover a hut like mine, producing an incredible number of fruits like the ones in the picture. You boil them and they taste a little like boiled potatoes. Some Chayote varieties bristle with soft spines, but these are the smooth ones. Chayote tubers can also be eaten.
Finally Luis showed me the Ñame (NYAH-meh) he was about to plant. You can see Luis in his Virgin of Guadalupe cap holding half a rooting Ñame tuber below: 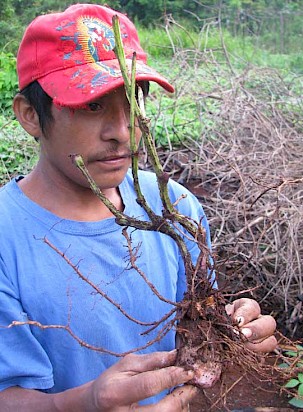 Ñame is DIOSCOREA ALATA, a member of the Yam Family, the Dioscoreaceae. In English sometimes it's referred to as White Yam or Water Yam. In eastern North America at the beginning of winter often you see slender, frost-bitten vines at the woods edges bearing straw-colored, Chinese-lantern affairs. Those vines are usually called Wild Yams, and they're in the same genus as Ñame, Dioscorea. Wild Yam tubers are very hard and small compared to Ñame's. Ñame is thought to be a native of southern Asia. Its tubers can be enormous. When Luis spread his hands to show how wide he expects his yams to grow, they were about two feet apart (60 cm), so we'll just see if he exaggerates much!

This article is adapted from Jim Conrad's Naturalist Newsletter. Jim is a naturalist with years of experience observing the ecology of the Yucatan Peninsula and beyond. The following article is adapted from the August 22, 2010 Newsletter issued from Hacienda Chichen Resort beside Chichén Itzá Ruins, Yucatan, Mexico. You can find the original article on backyardnature.net
All images and text at the backyardnature.net website, unless identified as produced by someone other than Jim Conrad, are copyright free, in the public domain. 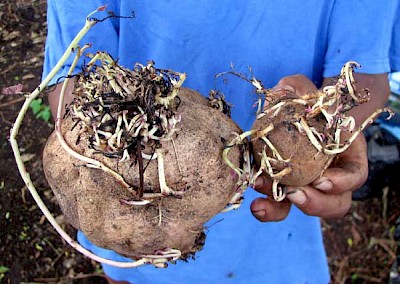