Working Gringa was lucky enough to be invited out to Hacienda Yunku yesterday for lunch. So, she bought tomatoes and fresh mozarella at Costco, packed her bathing suit and URL the puppy, and picked up a friend for the drive out to Yunku.

Hacienda Yunku is owned by Norte Americanos who rent it out by the night or the week to anyone lucky enough to know about it. A couple can stay there overnight for the average cost of a big city hotel. But this place is anything but average, and your average tourist probably wouldn't be able to find it, let alone enjoy it.

Not being your average tourist, W. Gringa found it and enjoyed her afternoon there thoroughly. The drive to Yunku from Merida takes about an hour, and is a pleasure and an adventure in itself. After turning off the main highway going south, you pass through two or three small pueblitos with children playing in the parks, an abandoned hacienda crumbling slowly in the sun and big trees spreading their verdant shade over the little town centros. The little tiny town of Yunku looks half asleep as you drive through to its namesake hacienda.

Though it was a hot day in Merida, at Yunku it was cool and breezy. Our friends were already there, lounging in the hammocks and sitting by the pool, so we wasted no time in joining them. We swam, we drank fresh limonada made from limones picked that morning from the trees, and we watched the dogs play.

A little while later, we pulled out a lunch of leftovers from the night before, a few cold Superior beers, and a freshly made caprese salad and enjoyed a late lunch on the patio. While we were eating, a storm blew in, rustling all the palm trees and kicking up leaves. We sat and watched the rain pour down around us. Working Gringa was reminded of the Mexican proverb from a great book we read awhile ago, which we highly recommend, Folk Wisdom of Mexico: Que bonito es ver llover y no mojarse. Translation: How beautiful to watch the rain and not get wet!

When the rain was over, so was the afternoon and it was time to head back to town. The dogs were dog-tired, and the humans were pleasantly relaxed and refreshed. The Yucatan had worked its magic one more time. 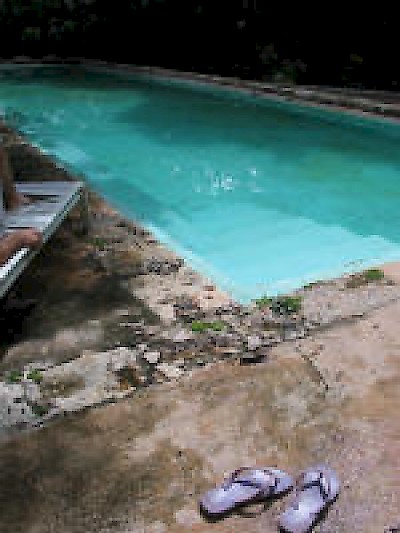