You'll probably notice it if you've been here more than a week or two: stone is used in almost every house in Yucatan. Fom the main ingredient in mamposteria walls (the traditional stone and mortar walls) to stone columns and stone tiles, local stone is used in colonial and modern homes alike.

Conveniently for the inhabitants of Merida and the surrounding area, the region's premiere stone carving town is a pueblo named Dzitya (DZEET-yah) which is about ten minutes north of the Gran Plaza, or ten kilometers north of Merida. Since 2001, Dzitya has been the site of the annual Tunich Municipal Handicraft Fair, held in July. More than 50,000 visitors come to this small town during the fair to see handicrafts from all over the area, including stonework and woodwork from Dzitya, as well as embroidery, saddle making, wicker work, woven hats and other crafts from pueblos around Merida. More than 200 artisans participate every year. The word tun means "stone" in the Maya language; thus Tunich and Xcanatun (which is very close) are all words having to do with stones. Why then is the town named Dzitya? And why do stone carvers live there, even though the actual stone doesn't come from that area? Dzitya is a place shrouded in mystery, and this is just one of them.

Our architects, Mercedes and Alvaro, took us and their children on a trip to Dzitya last week to look at stone and stone carvings. We are thinking of using stone in various ways in the house we are building, including possibly a stone fountain and some paving stones. We wanted to see where the stone comes from and get a idea of the prices.

Dzitya is a small town incorporated into Merida's city limits. The town's largest employer is Macedonia Maya Marmol, a manufacturer of stone, clay and glass products. There is little evidence of a big business in the town itself, which to the untrained eye may seem like just another hot and dusty Yucatan pueblo.

Dzitya has been a town of stone carvers as long as the locals can remember. The stone is quarried as far away as Oxkintok and Ticul to the south and along the Gulf Coast in the north, and trucked into Dzitya in big chunks. If you roam the back streets of the little town, you can see places where some of that stone has been dumped and the size of the chunks is rather amazing.

There are three basic kinds of stone, all of which are types of limestone, found locally and used extensively in building and decoration here and throughout Mexico. The softest stone is a white limestone called conchuela or coquina. It is marble-like in it's appearance, often has tiny but visible sea shells in it and is quite porous. Because of that, it isn't a good stone to use for counters or floors, but it makes great sculptures, wall sconces, wall molding, decorative columns, table-bases and frames. The other white stone is called macedonia and is quite a bit denser and harder. It polishes up nicely and is used in all the ways conchuela is used, but it can also be used in places like bathrooms and kitchens. The third stone is called Ticul stone, after the town near which it is found. The stone is orange or reddish in color, and can also be used in wet environments. It is dense and also polishes up nicely. These stones are also sometimes referred to collectively as cantera.

Walking through Dzitya, we also saw naturally formed stones that every store seemed to be collecting in a pile out front. These stones are flattish in formation, and generally white in color. They call them ostion or chapas, and they are gathered from the cienegas (swamps) near the coast. They are the stones most often used for paving stones because they are already semi-flat.

When you first enter Dzitya, on your left is a large building with arches that is labeled Artesanias (artisans) and appears to be almost abandoned. Under the arches are usually five to ten men, swathed in white clothes, who are working on various stone projects throughout the huge expanse of yard. The yard itself is covered in white stone dust and is hard to view without sunglasses on a bright Yucatan day. The men look like mummies coated in talcum powder. Over everything hangs a wispy haze, produced by the stone work going on beneath the arches.

The day we were there, we saw one man working on a stone bowl. Another was chipping pieces off of a large rock to form a table base. Both men used electric saws as well as good old-fashioned hand tools. An assortment of dust-covered dogs lay around among the stones in whatever shade they could find. Mercedes told us that this is a collective taller (workshop) where people from the village come to work if they don't have their own workspace or if the project they are working on is large.

There are also individual houses along the main street just past this building, each one with a family of stone carvers that have their latest endeavors on display in the front yard. We wandered from house to house, observing and asking prices. The prices were often delivered by a younger member of the family, old enough to remember what things cost but too young to be working the stone.

A typical stone sink made of Ticul stone (like the one in the photo above) is $300-400 pesos (about $28-37 USD) and a trio of different sized, perfectly round conchuela balls is $1,000 pesos (about $92 USD). One perfectly round ball made of macedonia was priced quite a bit higher, as the harder stone requires more work. Across the street was a man who specializes in stone tiles, which we were told run about $600 pesos (about $58 USD) per square meter (uninstalled).

We hopped back into our car and drove a few more blocks west, then two blocks to our left. There we found the town square, just recovering from a fiesta from the weekend before. The temporary bull ring, built from palos (sticks), was still partially standing.

At one end of the dusty town square stands the Templo de Inmaculada Concepcion, a small yellow church, fluttering with colorful flags the day we were there, remnants of the recent fiesta. In the shade beneath some old trees on the side of the church we encountered a Mayan woman selling fruit and a Mayan boy selling pirated music CDs. And since this is Mexico, he was broadcasting his wares quite loudly through a make-shift public address system. As it turns out, this is the traditional place to do that. A beautiful little plaque on the wall next to the playground says that there used to be stones here that, when struck by a mallet, rang with a clear and unique tone. The locals would use the stones to call the community together. We asked the Mayan woman, Donde estan las piedras? (Where are the stones?). Robados! was her answer. Stolen. She couldn't tell us when, but the stones were taken awhile ago, and all that is left is a plaque. The plaque, which bears a date of 1977, says that the art of selecting and repairing stones that make these musical tones in perfect scale is a secret art known to certain citizens of this fair town and guarded carefully to stay within the town. One can only hope that even though the stones are gone, the art lives on in Dzitya.

The town square, which of course also serves as the town fiesta space and soccer field, has an assortment of sleepy artesania stores on one side. A few of them deal in small wood and stone carvings, and it is here that we found a recognizably professional stone store, called Piedra Real (see info below). They deal in all the types of stone previously listed, as well as a "new" type they were calling rustico, a rougher type of white limestone that they can deliver in tile form. They have a comprehensive book of photos with examples of work they have done in the past. It seemed to us that any artisan in Dzitya is capable of executing any design from a drawing or a photo, and they have plenty of examples of their work to show you their skill and techniques.

As we were driving away, our architects noted that stone carving is one skill that is highly treasured and appreciated by both the local Yucatecans and the extranjeros (that would be us). Yucatecans as a rule do not like mosaicos (traditional floor tiles); they prefer the more modern ceramic tiles. In their eleven years of designing and building homes, our architects remembered that only two Yucateco clients who put mosaicos into their new houses. But everyone, they agreed, loves the look, the feel and the price of Yucatan stone.

Our most recent article about Building Our House in Merida

All about mosaico tiles also made in Merida 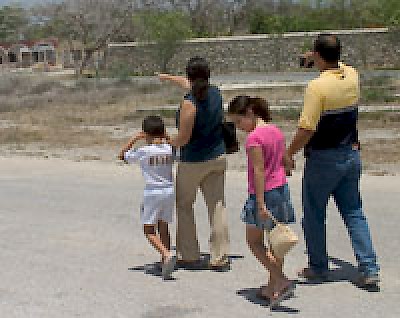 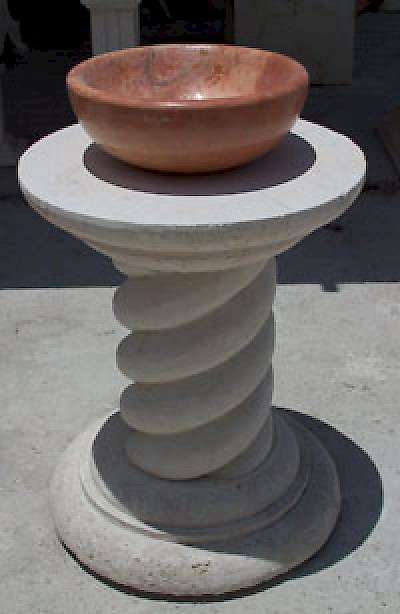 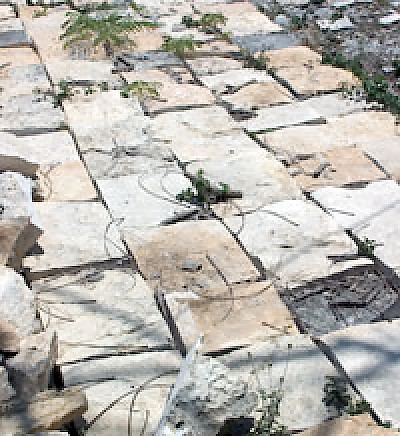 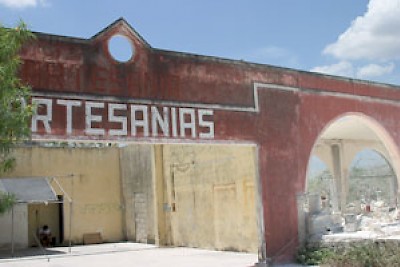 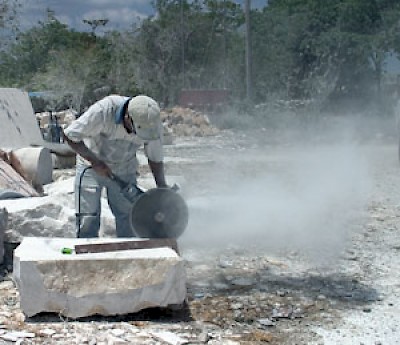 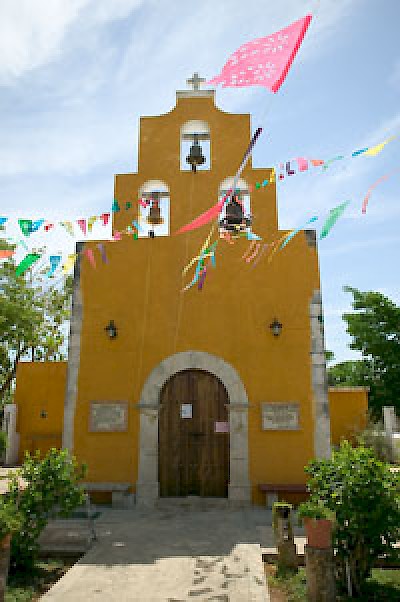 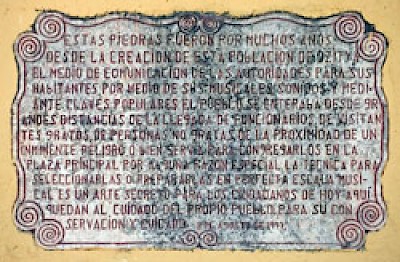