The City of Campeche

Editor's Note: It's been awhile since we traveled the two hours from Merida to visit Campeche. When we first visited Yucatan Peninsula's city-on-the-bay, we were struck by how charmingly neat-as-a-pin it was. The rows of multi-colored houses on cobbled streets seemed particularly Disneyesque, and we are still convinced that the creators of Pirates of the Caribbean spent a few weeks wandering the streets of Campeche, soaking up the ambiance and the history to create that famous and much-loved ride. The actual Campeche isn't nearly as exciting as its recreation by Disney, mind you, but that is probably a good thing... how many of us want to live inside an e-Ticket ride? (We're showing our age with that reference, we realize...) Campeche is a smallish city with a sleepy feel to it. A perfect place to retire, or effect a change of direction in one's life. The weather is lovely, history and the Mayan culture are around every corner and housing prices are reasonable. We asked Deborah Mackay to write us an article about modern-day Campeche. She and her husband, Malcolm Topping, own an English-speaking real estate agency in Campeche called Viva Campeche. If you are interested in the area, do contact them.

The port City of Campeche, located on a bay in the Gulf of Mexico, is the capital of the state of Campeche. It is located 196 km southwest of Merida about a two-hour drive on Highway 180.

But that lovely port location also exposed Campeche to constant attacks from pirates and buccaneers, including famous ones such as Francis Drake, Jean Lafitte, Bartolome Portugues, John Hawkins and many others. The attacks became less invasive after the government fortified the city with a surrounding quasi-hexagonal wall and bastions, many of which still stand and give Campeche a romantic and historical air about it.  In addition, there are over one thousand colonial buildings in the town that have been preserved. That and the fact that Campeche has retained many of the walls, gates, bulwarks and forts was enough to earn it the status of a UNESCO World Heritage site in 1999.

Originally, the Spaniards lived inside the walled city, while the Mayan natives lived in the surrounding barrios (neighborhoods) of San Francisco, Guadalupe and San Román. Today, these barrios still retain their original churches, providing small cultural and neighborhood centers. The gates of the wall are now tourist attractions. The land gate, Puerta de la Tierra, for instance, has a light and sound show three nights a week, and houses original supplies and other accoutrements from the 17th century in a museum setting.

As Campeche is a small and compact city, it is very walkable. On foot is the best way to experience the city, although there are attractions that require a taxi. Luckily, taxis are plentiful and cheap. Also, there is bus service to Merida, Cancun and other parts of the Yucatan Peninsula which is excellent... comfortable, air-conditioned and reasonably priced.

The campechanos have a traditional cross-peninsula rivalry with the citizens of Merida, but like most inhabitants of the peninsula, the locals in Campeche will embrace you with open arms and a friendly smile, and will usually be curious to know what you think of their city. They have good reason to be proud and invite you to share and enjoy the unique culture and traditions they still enjoy, including folklore, colorful costumes, music, dancing and local customs. We are always pleased to see that citizens regularly fill the streets with processions and an appreciative audience! It seems that every week of the year we have an opportunity to enjoy free live music and dancing in almost every plaza in Campeche. December is an extra special month of course, indulging us with an International Festival of live events from 23 November to 21 December. One of the highlights of the 2010 celebration was the Opera Prima, las voces del Bicentenario. This Magno Concierto de Navidad accompanied by the Campeche Symphony Orchestra was set in front of the grand backdrop of the Campeche cathedral in the main plaza. As citizens of the United Kingdom, it was amazing to us to find that all we had to do was turn up and take our seats!

In addition to December holiday events, Campeche also has a Feast of Candelaria on February 2, a Carnival celebration in late February (this year... the dates change yearly), a feast honoring Our Lady of El Carmen in nearby city Ciudad del Carmen, the San Roman Fair in the last two weeks of September and a celebration honoring the founding of the city of Campeche in the first two weeks of October.

If you decide to live in Campeche, you may end up in the centro, as there are still many houses available downtown. You may also end up just outside the very center, but still in one of the colonial neighborhoods. Today the barrios of Guadalupe, San Francisco and San Roman, with their cobbled streets,  are full of the same pretty pastel-colored houses as the very center of Campeche. Sometimes all that remains of the original structure is an attractive external facade. The colonial houses in Campeche can require anything from a decoration makeover to a full renovation to be habitable by those of us with American or European tastes. However, for those willing to take on the task, the renovations are certainly worth the investment in time and money, because what you end up with is difficult to afford anywhere else in the world. Colonial architecture fills so many of the senses, with soaring beamed ceilings, majestic archways, beautiful wooden doors and ornate tiled floors... combined with the respectful use of stone, marble, wood and iron, the end result can be stunning. If you are looking to get away from it all, Campeche is one of the few remaining tropical places where you can live in comfort and style very affordably.

Culture and history are bountiful in Campeche. If you are visiting as a tourist, be sure to visit the various museums and forts such as the Archaeological Museum at San Miguel Fort, our favorite. We also enjoy the sea breeze just walking along the Malecon, a 5 kilometer seafront walkway, where residents promenade to enjoy the sunset at the end of a hot day. One of the most important and picturesque streets is Calle 59, at the top and bottom of which you can see the old gates of the city, Puerta de Mar and Puerta de Tierra. The street has been made even more attractive recently as work has finally finished which widened the pavements, making it much easier to enjoy the little cafes, restaurants and local craft shops along the way.

It would be unthinkable to visit Campeche and not take a walk around the main plaza, called Parque Principal. Spending time there allows you to enjoy the old trees, the gazebo in the middle and the stunning cathedral on one side. We recommend taking this stroll in the evening when the Cathedral and the colonial buildings on each side of the plaza are lit up and looking their very best. If you are lucky, you may be just in time to see a wedding spilling out or to listen to a Mariachi band playing at a nearby restaurant or in the gazebo itself. Evening really is the best time to enjoy a Margarita and just take in the view. It really is no exaggeration to say that the Parque Principal of Campeche is picture perfect. Many people think it has got to be one of the prettiest plazas in all of Mexico.

There are places to see just outside of Campeche too... they require a car, but are well worth the extra effort. The archaeological zone of Edzna, for instance, is a Mayan ruin, whose name means House of the Itzaes, the same people responsible for building Chichen Itza. The people were said to be extremely adept in architecture and engineering, and this can be seen at Edzna in the construction of a series of channels and dams built there to store and distribute water.
Calakmul, another Mayan ruin, was once one of the largest ancient Mayan cities ever, or at least is one of the largest that has been discovered in modern times. Champoton, a small fishing community on the coast south of Campeche has miles of tropical beachfront where you can enjoy the beaches, fishing, archeological diving, cycling or just take in the natural beauty of the mangroves and jungle.

Today Campeche welcomes visitors and residents with warmth and curiosity. The infrastructure in Campeche has grown sufficiently to offer tourists an unforgettable visit and is now set to follow in the footsteps of Merida in offering superb investment and retirement opportunities as well. There are large developments being built south of Campeche along the beautiful Gulf Coast, which many people believe will eventually cover the coast from Campeche to Ciudad del Carmen. Stores, restaurants, movie theatres and hotels are springing up in the Campeche area... there is even a five-star Starwood Hotel in Campeche, Hacienda Uayamon.

While it is helpful to speak a little Spanish to get around Campeche, more and more young people in Mexico are learning English and welcome the opportunity to practice with you. Sometimes, the people you meet along the way can be your best teachers of the language. We have always found that some of our best teachers are waiters, drivers and other service providers who will exchange a few words of Spanish for a few learned words of English.

In general, Campeche is "behind" Merida in both its infrastructure and its language flexibility. It is a two-hour minimum drive to the Merida airport, and to some of the resources of that city. What Campeche lacks in modern amenities, it makes up for in charm and beauty, and opportunity. Not only that, but Campeche's modernity lag behind Merida can be your gain... it is less expensive to travel, invest and live here!

For more information on Campeche, try these links: 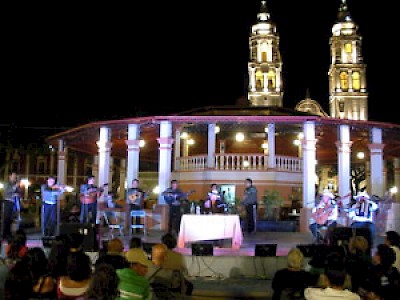 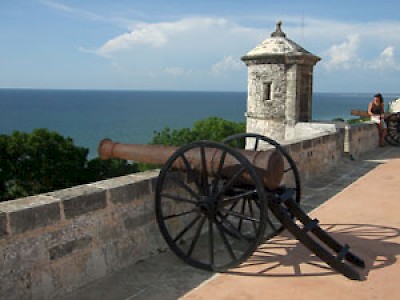 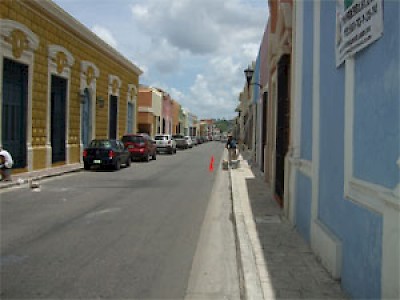 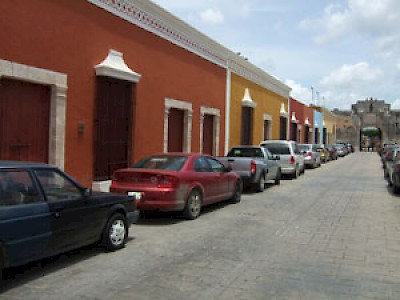 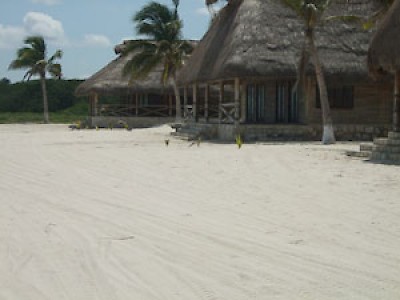 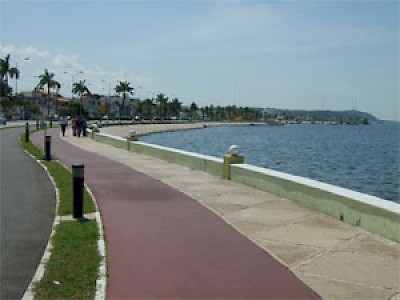 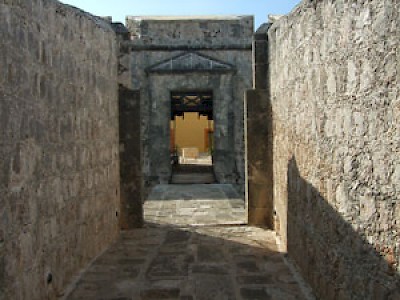