A Stroll Around Merida's Zoo

Almost a hundred years ago, February 1910 to be exact, the city fathers (and mothers?) of Merida decided to designate a large area of land to the trees. They sectioned off a part of the Centro Historico that was across from the O'Horan Hospital (the oldest hospital in Merida), the City Jail (now a government building) and the Parque de la Paz (Peace Park). They planted the whole area with all the different trees from the region: flamboyanes, lluvias de oro, zapote, mango, guayaba, mamey, ciruela, palms, pech, and many others. Each tree apparently had a plaque identifying it's botanical name and so the Parque del Centenario, established in the year of Mexico's Centennial celebration, became a Botanical Garden. It was surrounded by a low stone wall and it was a cool, well-shaded place for la gente (the people) to stroll and relax.

Five years later, the city decided to put animals in the park. They started with local birds, including faisan (pheasant), quails and pavos de patio (backyard turkeys). Gradually, more and more animals were added, and the park gradually became a zoo. Between 1929 and 1942, there was very little money for frivolous things (this being after the Mexican Revolution), and the park went for many years without improvements. Then in 1942, they added large steel cages and some larger animals (hippos, and lions and zebras, oh my!). In 1943, they created what appears to be the largest sandbox in Merida and they also built the Pergola de Guty Cardenas, the hexagonal-shaped stage that graces the north end of the park, surrounded by carefully manicured gardens, named for the famous Yucateco trovador (trova singer); you can hear him sing some of his famous songs in our Music Section.

In the 1960's, there were no malls or video game parlors for the children in Merida. The Zoo was THE place for kids to have fun in the city (and still is for many). The mayor in the 60's, Mario Esquivel, decided to make some real improvements to the Parque Zoologico del Centenario, as it had come to be called. He added big and exotic animals, like jirafas (giraffes), elefantes (elephants) and hipopótamos (hippopotamus). This visionary mayor also built the eskimo igloo building (wishful thinking in the tropics?) and the Indian teepee, both of which are now snack stands.

One of the most popular attractions of the Zoo, the train, was first introduced in 1962. It was built by a local contractor and had a diesel engine. The train that is running in the zoo today was built in the early 1980's and is the fourth reincarnation of the zoo train. Another popular plaything in the zoo is the airplane-turned-jungle gym that "flies" above the sandbox. It was an old Cessna that was found in the jungle near the airport and was given a new lease on life in the playground in 1972.

The main entrance to the Zoo is at the corner of Avenida Itzaes and Calle 59. There are two fountains there, straddling Calle 59, that sport matching plaster white egrets. The large salmon-colored gates are the original gates from 1910 and are a beautiful example of Beaux-Artes architecture. Entrance to the Zoo is free. There are two other open entrances on the East and West sides of the Zoo, and one ancient-looking entrance on the South side which is never open.

For the full effect, we decided to enter through the pink gates, and the first thing we noticed on our right was the tree called Arbol del Centenario. It seemed like a pretty unassuming tree, actually, for such a fancy sign and special place. We did our research afterwards and found out that the tree had indeed been planted in 1910, and had grown for many years. During Hurricane Gilberto, the tree had been uprooted and torn completely out of the ground. Entangled in its roots, the clean-up crew had found a metal box that contained the original hand-written act that established the park and described the inauguration ceremony. It also contained the newspapers of that day and some gold and silver coins. In those days (at the turn of the 20th Century) it was traditional when building an important structure to put together this sort of "time capsule", including the acta constitutiva of the building, coins and newspapers. It was also traditional to hide the box in an undisclosed location. The incredible coincidence of the hurricane ripping up the tree and unearthing the treasure was recognized and appreciated, but out of respect for tradition, the box was immediately reburied. A team of Mexican and foreign biologists worked together to replant and revive the tree and because of their efforts, the arbol del centenario is still alive and is one of the oldest trees in the park.

Next to the ancient tree is a display of slabs of stone, intricately carved with what seems to be an elaborate story. These stones used to be part of the facade of a house in the area that was owned by a Colonel Pablo Gonzales. He fought in the Guerra de Las Castas (the Caste War) in the 1800's against the indios, the Mayans. He was so proud of his participation that he had a local artisan carve the stories of his experiences and exploits onto the walls of his home. He died anyway, of course, and when the new owners wanted to upgrade the home, they were going to destroy the walls. The carvings were saved, cut out and placed in the Museo del Arqueología until that same Mayor, Mario Esquivel, requested that they be moved to the Zoo in the big upgrade of the 1960's. He had a cement base built to display the stones, and there they stand to this day. You can read about Colonel Gonzales' participation in the destruction of the church at Chan-Santa-Cruz, the Cruzob Maya's most sacred site located in what is today known as Felipe Carrillo Puerto.

We continued to stroll lazily along the paths at the north end of the Zoo. There are a few places to eat, including an abandoned restaurant in an old railroad car, a quiet little stable where they give children's pony rides, but mostly this end of the Zoo is quiet and somewhat empty, with a few lazy fountains and shaded benches. A perfect place to read a book or a morning newspaper.

In the middle of the zoo is the huge sandbox, which appears to be the focal point for activity. The day we were there, not only were there kids playing on the jungle gyms, kids practicing skateboard in the skateboard park and kids and parents eating at the taco stands ringing the central area, but there were booths set up by government groups with educational exhibits about the value of clean water and what everyone could do to ensure clean water in the future.

In order to pass out of the sandbox area to see the exotic animals, you have to give up your drinks, your ice cream bars and your cotton candy. They don't allow any food or drink in that section of the zoo, and the multiple signs saying "Don't Feed the Animals" in many different ways must have something to do with that. We quickly ate up our hand-spun bubble-gum-pink cotton candy and moved on. In the south end of the zoo, we found the hippos, the giraffes, the avestruzes (ostriches), bighorn sheep and their newborn babies (littlehorn sheep, we suppose), flamingos, tigers, leopards, a panther, capyberras and so much more. According to our new friend, Jose, the head of security at the Zoo, there are 150 people who work at the Zoo and 1,500 species of animals. We checked that number with him twice, but we still can't see how that's possible. Jose told us the smallest animal at the zoo is the white mouse, which is raised to feed the culebras (snakes). The largest animal is the hippo or the giraffe, depending on what parameters you're measuring.

There's a huge aviary in the center of the zoo, covered with vines and filled with trees. In the mornings, the most wonderful jungle noises come out of that area... and that is probably where a good third of those species or more are making their home. We saw everything from parakeets to mynah birds to eagles. The Zoo in Merida definitely has a lot of birds.

Crocodiles, boa constrictors, emus, jagarundis, turtles, barn owls... but no elephants. We could have sworn we heard elephants one morning. But we didn't see any elephants. And when we asked Jose, he confirmed that yes, there are no elephants. Our Meridano-born friends who remember the Zoo fondly from their childhood visits attest to the fact that there used to be elephants. But, alas, in 2007 there are none.

Despite this disappointing development, we have managed to enjoy every visit we've ever made to Merida's zoo. In general, we aren't fond of zoos, as they tend to be places where animals are kept in cages, and we aren't big fans of cages. But the Merida Zoo is one of the most peaceful zoos we've ever had the pleasure of enjoying. The high ratio of trees to other living things almost makes the animals an afterthought, which historically they were. With it's ponds, plantings and pathways, the Zoo is a lovely place to walk, meditate and enjoy the company of your family and friends.

The zoo in Merida opens at 6:00 in the morning, which means that you can walk around this lovely park, enjoy the sunrise and watch the animals wake up... something you just can't do at most zoos. The zoo is free, so people come from all over the area with their children and grandparents to enjoy a leisurely afternoon. There is no rushing around to make sure they see it all before the day is over or to make sure they get their money's worth. There is something really lovely about those wide open iron gates and no ticket takers and no one standing outside, wishing they could go in.

There's a lot happening in Merida. And no, it's not all happening at the zoo. In fact, there's not a lot happening there at all. Just balloon-men floating their shiny bubbles of happiness above their heads while cotton candy is spun into pure delight in pastel colors, while sunlight bounces off the faces of children playing in the sand and the hippos and tigers roar and the trees stand majestically and patiently over it all, having seen it all before, every day (except Mondays) for almost a hundred years.

The Zoo in Merida is located at the corner of Avenide Itzaes and Calle 59, west of the Plaza Grande in the Centro Historico. Hours are from 6:00 AM until 6:00 PM Tuesday through Sunday, and closed for some holidays. Entrance is free. 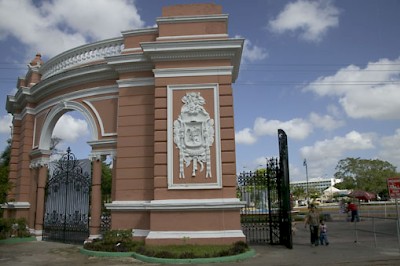 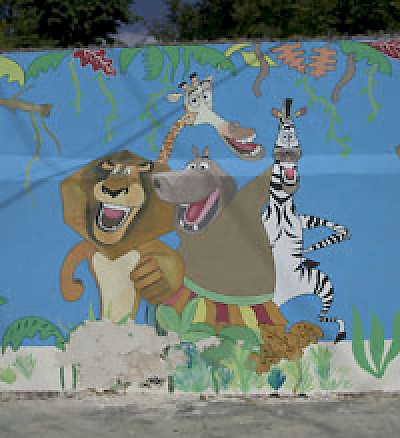 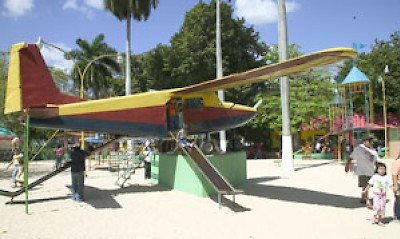 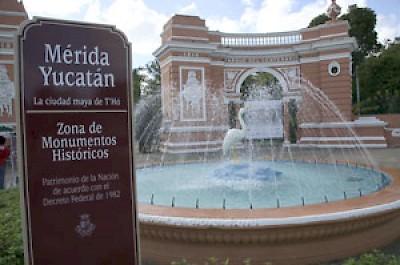 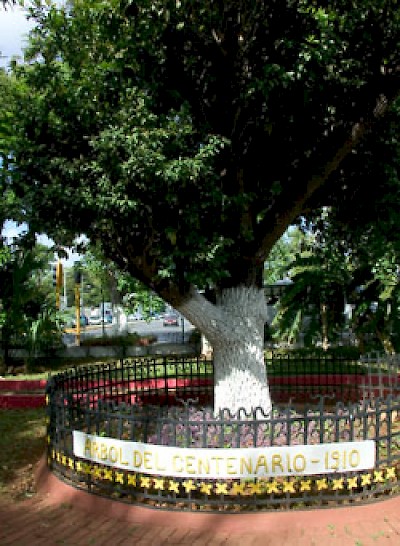 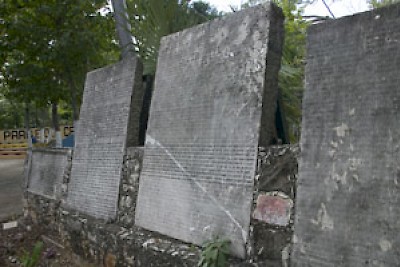 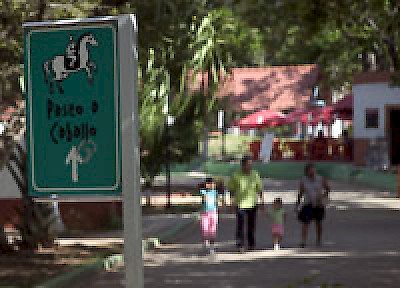 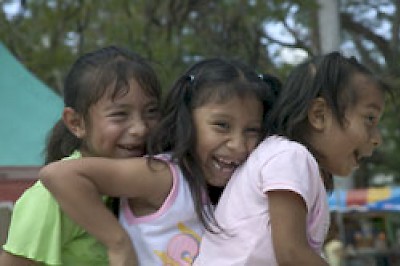 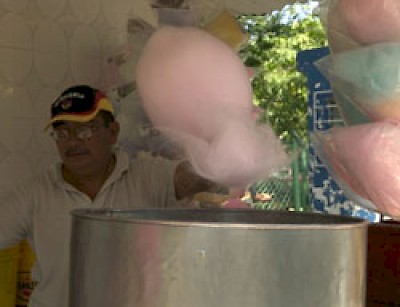 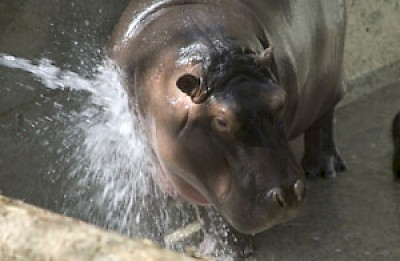 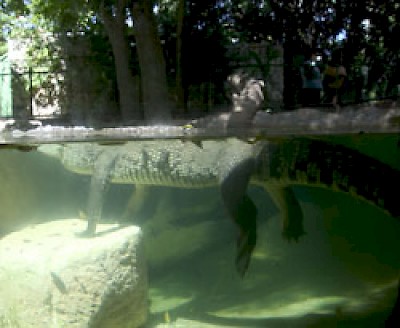 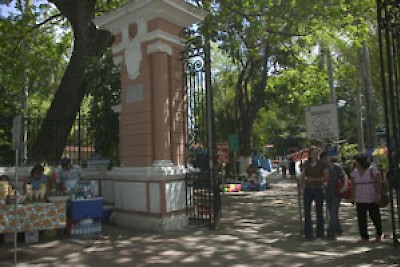