A few weeks ago, the Working Gringos did something that all expats end up doing at some point or another: entertaining visiting family and friends. We refuse to go to Chichen Itza more than once a year nowadays, but our most recent visitors (one of our grown daughters and her best friend) wanted to go to a Mayan ruin. They admitted this was strictly a guilt-assuaging move to get some cultural benefit out of the trip that was otherwise spent sitting in the sun, shopping and eating… wonderful stuff, but something one can do in many places around the world. Mayan ruins on the other hand, are unique adventures only possible in this part of the world, and they didn’t want to go home feeling like complete Philistines.

All too eager to help any human escape the ravages of guilt, we agreed to take them somewhere, and the ruins at Coba were selected for our collective visit. The two girls had never been there, and the Working Gringos had never been past the first ruin just inside the gate. This time, we vowed to go, pay our admission and take the bicycle ride all the way to the big pyramid for which Coba is best known, Nohoch Mul. The powers that be still allow visitors to climb Nohoch Mul, and we were game for that too.

Coba Is Easy To Find

When we got to the glorieta on the road between Tulum and Valladolid which marks the turnoff for Coba, we were greeted by a brand new paved road that had not been there just three months ago. The paved road stopped after a few hundred meters on the way to Coba, but by the looks of it, will reach all the way to the ruins by the time you can say impermeabilizante (go ahead, say it! we're sure the road is done by now!). The little town of Coba is uneventful and unremarkable (though Wikipedia claims it has over 1000 inhabitants), with a few lazy dogs and some random tourists wandering the streets looking like they have landed on the wrong planet. The road dead ends at a beautiful marsh-lined (and crocodile-filled?) lake, one of the four for which Coba is also famous (above-ground lakes in the Yucatan are highly unusual, let alone four in one place). Turn left at the lake and you'll run right into the Coba Ruins parking lot.

Once you reach that parking lot, you realize you have reached the tourist’s planet and they weren’t so far afield after all. Here you are charged $50 pesos for parking (FIVE times the cost of parking at Chichen Itza but still less than $5 USD). The large dusty lot held at least ten or fifteen luxury tour buses the morning we were there, as well as numerous AllTournative Tour Company and other company vans. Each of these vehicles had unloaded their contents of five or more extranjeros, most of whom seemed to be taking a brief respite from their vacation at the Mayan Riviera.

We paid and we entered. We’d heard that the main pyramid is about a mile into the jungle, so we were prepared for the bike rental station just over the first little hill on the trail. After checking out the mini-ball court and a few other structures that are within walking distance of the entrance, we headed over to rent bikes. At first we thought we would rent two tricicletas (Mayan-powered three-wheelers with seating enough for two), but they were apparently all reserved for some portion of the hordes unloading from those buses. So we settled for four gringo-powered mountain bikes of varying ages and conditions at the cost of $30 pesos each (the tricicletas would have been $95 pesos each). We could have walked, of course, for free, but where’s the fun in that?

As we pedaled toward the first grouping of stone buildings along the trail, we all remarked on how long it had been since we had last been on a bike (the time ranged from four to twenty years!). We all noticed how hard that little bicycle seat was (and some of us were still noticing, days later…). And we noticed with dismay that the trail seemed to decline slightly, allowing us to coast along the way and not requiring much pedaling. While this was nice, it could only mean that the return trip would feature an incline and would require a lot more pedaling and maybe even a modicum of effort. Add to this that all of us are over 5 feet 6 inches and none of the bikes we had picked seemed to have been adjusted for anyone over five feet tall. We all felt like we were riding our little brother's bike, but it was part of the adventure!

We must admit, we were unimpressed by the three or four groupings of ruins that preceded the Big One. The stellae that were protected by little palapa roofs already were so eroded as to be unintelligible to the untrained eye. We weren't sure the roofs were doing much in the way of protection. We did notice that the buildings reminded us more of Uxmal than any other ruin we have been to in the Yucatan, especially one that was oval-shaped with three layers, which was evocative of the Pyramid of the Magician at Uxmal. Another ball court featured some very precise Mayan codices carved in stone that were highly detailed.

But once we came into sight of the end of the trail, any slight disappointment we were feeling all fell away. There before us was a tower of rock steps higher than the Castillo at Chichen Itza (which can no longer be climbed, as you may know). Nohoch Mul, the large stepped edifice at Coba is eminently climbable and there were at least fifty multi-colored people of all nationalities climbing it when we got there. We kicked around at the bottom for awhile, debating the climb, and then decided to go for it. How could we in good conscience, write about Coba if we hadn’t achieved the Holy Grail of the view from the top?

As with most of these rock-climbing challenges, going up is easy. Especially if you keep your eyes firmly in front of you and climb with both your hands and your feet (Working Gringa’s preferred method). You might find it a little harder if you stop to take a rest halfway up and take a look around (eek! Try not to do that...) But once at the top, there is a nice sturdy platform that lets you catch your breath (and retrieve your stomach from where it fell near your feet). You might notice the diving god sculptures (the same ones that are on the temples of Tulum) that grace the lintels of the doors on the little temple at the top. Other than those, there isn’t much else to look at except the amazing view. And what a view! Best view in the Yucatan, hands down (or gods down, as the sculptures point out), so far.

This Must Be Why They Built Them

That view and the cool breeze that comes with it, we’re convinced, is the reason that these temples were built. What priest or king wouldn’t want to rise above the oppression of the jungle to feel like he was flying with the birds? What exalted ruler could refuse the lure of the perspective that such a view afforded him? What king could resist the siren call of constant cool sea breezes on even the hottest of days? What was the point of being a king or priest if you could not enjoy these luxuries, perhaps the most valuable ones in these hot and muggy jungles?

Now, as it is throughout the world, mere mortals can enjoy these kingly luxuries and there were about twenty of us mortals sitting around at the top, mostly drinking water and putting off the inevitable: going down. Going down a pyramid that tall is an act of faith that looks more dangerous than it really is… or so we convinced ourselves as we were doing it. (We actually heard someone remarking “They wouldn’t let us do this if it was really dangerous” to their friends as they climbed down. O, ye of so much faith!) Working Gringo, with his exceptionally long legs, preferred to walk down on his feet, while Working Gringa and the girls chose the upside-down-frog method, “walking” down on their hands, feet and butt. This method proved slower but reassuringly safe and everyone got down in one piece, none worse for the wear.

At the bottom, we moseyed back to our bicycles, legs screaming with the effort of bicycling and climbing. Those Mayans… they are so clever. A few tricicleta drivers at the bottom of the pyramid offered us the option to leave our bikes there and let them drive us back… for another 35 pesos each. Not that it wasn’t tempting, but we decided to suck it up and finish what we had started.

Lessons From the Bicycle Gods

And so our trip to Coba ended with another Life Lesson, handed to us by the Bicycle Gods, minor deities that we hadn’t paid homage to since we were kids. Somehow, the trail back to the beginning was also downhill (we’re convinced it was magic…). Our legs felt stronger and we were more sure of ourselves on our bicycles now that we'd had some practice. The day had turned a bit cool and the path ahead was twisty, turny and just made for riding fast and free. We all biked back with the wind in our hair and a glowing nugget of joy in our hearts, because riding a bike is nothing if not FUN. And we were doing it together, in the middle of the jungle, dodging tourists like obstacles on a slalom course. We didn’t fall, we didn’t slow down… we just flew like the wind! Coba, with its jungles, tall tower and bicycles, turned us into kids again for a brief moment. 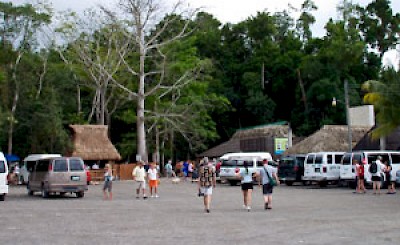 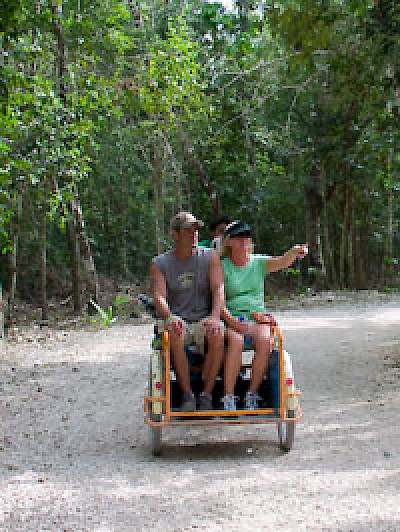 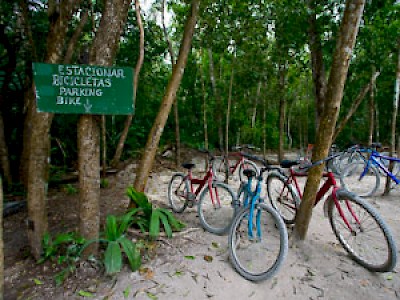 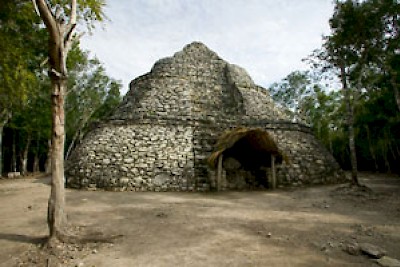 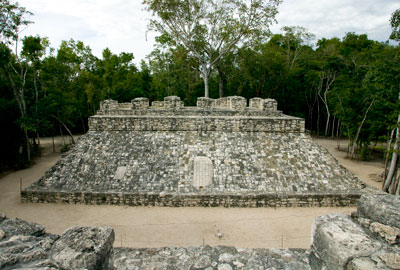 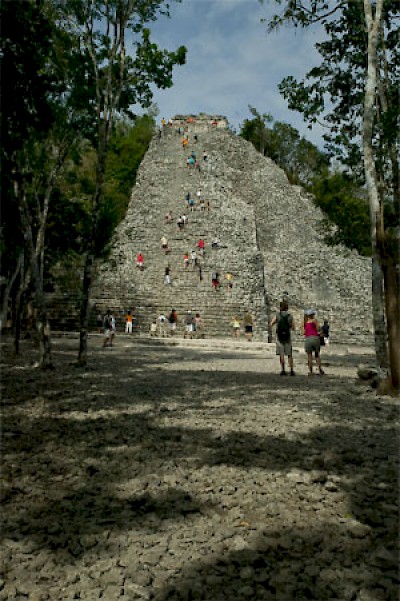 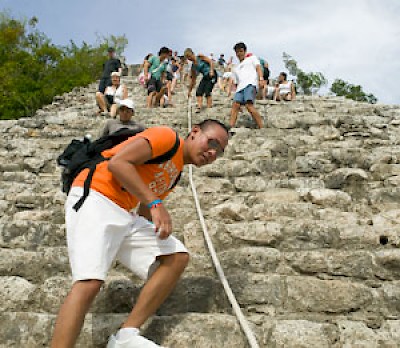 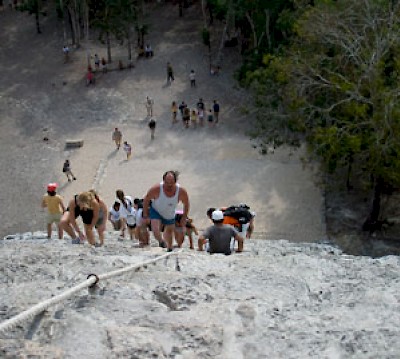