Editor's Note: Isla Holbox is getting more and more press these days as the place to see the whalesharks. While all that is true, there are other reasons to visit this beautiful island. And off-season on Holbox is high season in other places on the Yucatan Peninsula, making it a great place to visit for a weekend getaway from Merida or Cancun. A new writer, Kim Edwards, shares her experience of her first visit to this sleepy island.

Looking for Peace and Quiet

During our Yucatan trip in early 2013, the prospect of Isla Holbox (pronounced 'hole-boash', a word that is Maya for 'black hole') shined in our itinerary like a sparking jewel. My boyfriend Frank and I had read about Isla Holbox in The Lonely Planet Guide and were eager to check it out. After three weeks spent crossing the states of Quintana Roo and Yucatan, we looked for a relaxing locale as the finale to our jaunt. When an American couple we met in Mahahual raved about Holbox, we headed there for our last week.

Leaving Mahahual, located down the coast a few hours south of Tulum, we caught an ADO bus to Cancun. After the five-hour ride to the Yucatan’s busiest playground, we got off the bus in the central bus station and hailed a cab to Chiquila, the tiny pueblito that is the departure point to Isla Holbox. We did our best to negotiate a good rate for the ride and felt pleased that we paid $800 pesos for the trip. Later on, we heard from a Scandinavian couple that they had paid more than $1,2000 pesos for the same ride, which of course made us feel even better.

The two and a half hours traveling northwest from Cancun through tiny villages passed pleasantly enough. In Chiquila, a fishing pueblo that you can drive through in a blink of an eye, we approached the dock for the ride to Holbox. Two ferry companies compete there for customers for the 20-minute trip. There seemed to be no notable difference in service, so we chose the cheaper fare. Our luggage was stored in a compartment in the stern of the boat, and we were off! During the trip, I was happy to find the restroom was clean and working. Though enclosed seating was available, we climbed to the top deck where we could enjoy the haze-draped vistas as we approached the island.

After a lovely boat ride, we arrived and rolled our suitcases past the waiting taxi “golf carts”, heading for the main square. The sandy, unpaved streets made for mostly comfortable walking. Street signage was sparse, but it is hard to get lost. We aimed for the Plaza Central, where we planned to look around before finding a hotel. Several blocks in, we passed Casa Barbara that advertised a room for $650 pesos per night. This hotel turned out to be a good fit for us. The interior garden reminded me of places we had stayed in Bali. Continental breakfast was included with a full breakfast of omelet and frijoles for an additional 30 pesos . The pool was a good size and the WIFI Internet reached our room with few interruptions.

During our stay we inspected a few of the beach-front hotels along the North-West coast, including one recommended by an American, but none could top what we already had for the price. The hotel zone, just blocks away from any point in town, seemed devoid of tourists when we were visiting, but it may just have been the time of day. Or the time of year. The high tide of tourists comes to Isla Holbox in June, July and August. Throngs of people arrive from around the world to swim with whalesharks, who reliably (so far!) congregate offshore between Holbox and Cancun for an annual feeding. It was hard to imagine an island of fewer than 1,000 residents swollen to accommodate these hordes of tramping foreigners, but that is what we were told. In January and February, we did find some Europeans, and a few Americans, but the island was blissfuly quiet.

Holbox offered just what we were looking for. The island spans only 25 miles and only a portion of it is developed, so we found it pleasingly empty. Frank jogged along the beach every morning or rented a bicycle to follow a trail. We enjoyed meeting the people who live on the island. We also liked the gleaming shells on the beach, the pink, blue and green Caribbean-colored buildings reminiscent of a Garcia-Marquez novel, and the overall simplicity of island life on Holbox. Frank appreciated the lack of high-rise developments as well. The few overcast days were pleasant, for even then, the coconut palms and palapas flapped and swayed in the breezes, creating a perfect soundtrack for reading a book and relaxing.

From my hotel I enjoyed just sitting, feeling a faint sea breeze, and watching the billowy clouds and blue sky. Below my balcony, a town of stone, shells, sand, and some kind of clay plaster contrasting with wooden doors, posts and planks made for a pleasant view.

A Day on the Island

Every morning on our visit, we read on the hotel room porch and worked on the computer. We wrote, jogged, and visited a fruit market daily. Pineapples, mangoes and papaya grow here and were fresh and delicious. We bought fresh tortillas, made every morning. In the afternoons, we walked. Golf carts can be rented for driving out to the rest of the island, but we liked strolling and decided to save the rest of the island for next time.

At the end of the day, we picked up shells carried in by the waves as we awaited what turned out to be a magnificent sunset. The water is surprisingly shallow, so we could wade out far into the water. Amazingly, the sand was clean and pristine in most places, and was practically free of other tourists.

The town of Holbox is situated around the central plaza, which was often filled with children enjoying the play equipment. Occasionally at night, we saw a few European youths with dreadlocks selling jewelry or pedaling by on bicycles. There were many restaurants and hotels along the perimeter of the town, mostly along or close to the beach, and a myriad of shops running down side streets. We also noticed a Catholic church on the square that sponsored activities, giving us the sense that this is an ongoing community not just for tourists.

In the evenings, we often ended up eating guacamole and octopus with garlic at a restaurant called Tio Nico. We also liked Pizza Edelyn, an established restaurant frequented by locals. On our last day, we discovered a jugeria (juice shop) on the beach where we enjoyed five fruits with yogurt and granola in a parfait glass. Hmmm... fresh fruit and yogurt on the beach... does life get any better than this?

Nightlife on Isla Holbox is practically non-existent. There was an exercise class held behind our hotel that woke us up some mornings, so perhaps that was a blessing in disguise. Many of the shops seemed to keep irregular hours, while a few appeared to be closed for the season. Life on Isla Holbox seemed to be anything but formal.

We were struck by the number of pet dogs that ride in golf carts or amble behind their owners. All pets on Isla Holbox seemed cared for, including the lab-mix with the bandaged head who watched us through the door of a local business. Occasionally dogs doze in the street, leaving one curious as to if they belong to anyone, but they never were a nuisance, nor did they appear hungry or sick. And because there are no cars, only golfcarts, lounging in the streets is perfectly safe. Probably our favorite interaction with a dog on Holbox was with Lobo, the dog belonging to Don Arnoldo of Casa Barbara where we stayed. Lobo had been rescued by the local animal shelter and identified as a dog that needed a caring owner. The owner of the hotel took Lobo from skinny and mangy to the healthy, handsome and proud member of the community that he is today.

Shopping was fun on the island, if limited. We were glad to have brought cash with us, as the ATM frequently runs out of it. And a lot of stores just do not take credit cards.

Generations of fisherman have lived on the island, and we sensed they had a stake in the future in trying to limit tourism. This appears to be an ongoing controversy and of great concern to the residents. On our last day there, we met a store owner who was involved in efforts to prevent further resort development. He was working on this in spite of talk (or maybe because of it...) that foreigners had recently purchased beachfront land for major construction of a new hotel.

In general, the residents of Isla Holbox were noticeably happy and relaxed compared to people we have met in other places around the world. When we talked to them, it became obvious that some of them had arrived from other parts of the world and felt like they had arrived in Paradise, vowing never to leave. These included the young man from Argentina who came here just to relax and someone we met at our hotel, Don Arnoldo. Don Arnoldo (in the white shirt), is the owner of Lobo, and is in charge of the restaurant and food services at the Casa Barbara and other properties owned by the same hotel owner. Don Arnoldo is originally from Mexico City, and moved to Holbox for the tranquility and has never left. He encourages hotel patrons at breakfast to share a table so they can interact. We liked this philosophy as we noticed when Don Arnoldo was not present to enthusiastically promote this concept, visitors tended to sit by themselves at small tables. Getting to know fellow travelers and the people who live in Holbox was a lot more fun.

After a few lovely days of relaxation, it was time to say good-bye to this beautiful little island. A ferry ride took us back to Chiquila. The ride wasn't as placid this time. Mid-way, when the choppy waters and winds started rocking the boat, a young but able employee came up top and steered us down into the cabin. Once in Chiquila, the sun was shining peacefully. We waited on shady benches until the bus to Cancun came to take us away. (A bus to Cancun comes to Chiquila a couple of times a day.)

Nothing hurries here, including the seven pelicans perched on a boat as we sat on our bench across the way. We were approached by taxi drivers offering to take us instead of the bus. Finally an offer came in at 400 pesos . That was irresistible, for it would allow us to get to downtown Cancun with plenty of daylight left. I felt sad leaving, but knew we’d be back for a longer stretch, next time with several books in tow! 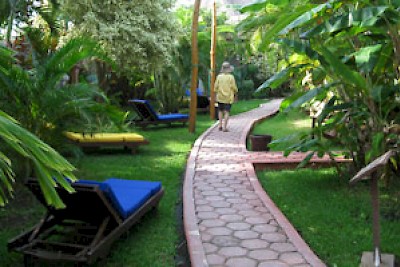 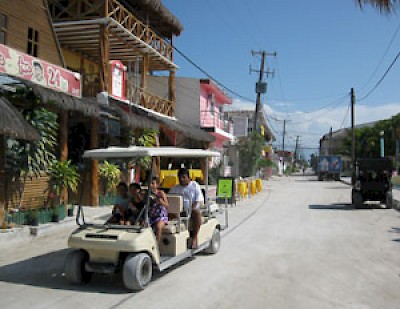 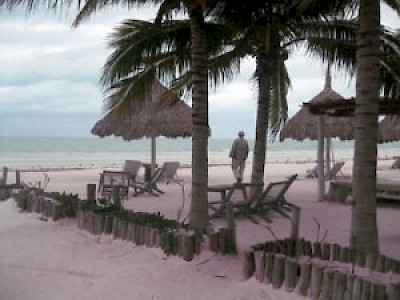 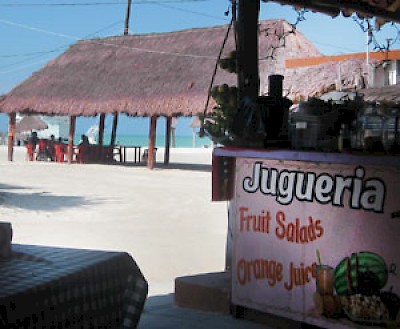 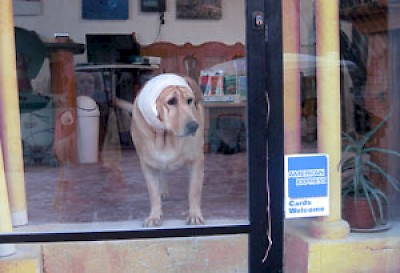 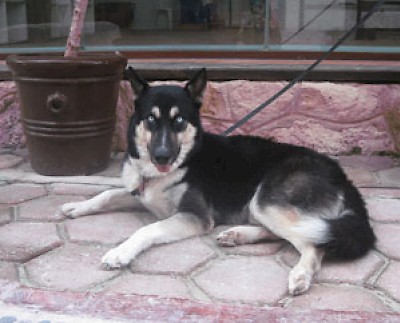 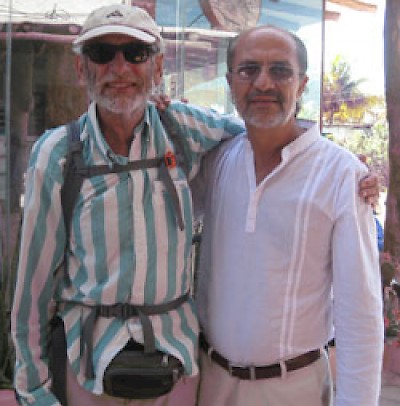 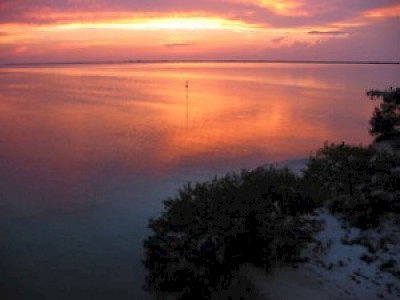