Now and then, for obvious reasons, the Working Gringos pack a cooler, our two faithful dogs and our cameras into our camioneta to go in search of something beyond our computer monitors. This past weekend, we drove east and took the exit off the 180 Autopista to Valladolid with the intention of exploring the second largest city in Yucatan State. But when we stopped at the intersection of the 180 Libre, we saw one of those ubiquitous blue road signs with the international “historic town” symbol. On it was printed Uayma 13, and it pointed to the right.

We thought we had heard of Uayma (pronounced WHY-mah) somewhere before. Perhaps we had read about it in the local paper, Diario de Yucatán, or maybe someone had mentioned it to us over dinner. We couldn’t remember the context, but we thought Uayma might be famous for its Iglesia (church). So without much discussion, we shrugged, hit the turn signal and changed direction. Another typical road trip.

During the brief eight-minute drive, we pretended to decode the pueblo’s name. We know that uay is Mayan for a number of things, all bad. It’s the common expression for surprise, as in Uay! Alacrán! (Yikes! A scorpion!) It often means “haunted” when used in a place name. It can also mean “were”, as in werewolf, when applied to an animal. The dreaded Yucatan Uaychivo, a weregoat that terrorizes several local communities from time to time, is the most famous case in point. The word ma is less ambiguous; it’s the Mayan word for “no”. By the time we turned the corner into Uayma, we had decided that its name meant “No Fear.”

As we drove into town, the first thing we saw was the burned and battered ruin of a colonial train station. It was retreating into the encroaching selva, from which the long, straight iron tracks emerged only to disappear again. Something unpleasant had indeed happened here once, but as we drove on, there was little time to ponder it. The next building in sight was Uayma’s Palacio Municipal, or County Seat as we say back in Gringolandia, painted bright blue and looking like a birthday cake decoration.

We parked in the shade of a flamboyan tree near the pueblo’s central plaza. The weather this day could not have been more agreeable. The temperature hovered in the mid seventies, while a cool breeze carried the scent of fresh cut grass and rich forest soil. The sky was deep blue and heavy with stately white clouds that seemed motionless yet were continually changing shape. Birdsong and children’s laughter greeted us as we stepped onto the streets of Yucatan’s version of Mayberry R.F.D.

Uayma has benefited from the attentions of the Yucatan government and a healthy economy. The nearly 2,300 residents enjoy clean, paved streets, fresh paint and well-groomed gardens in their public park. We were told that a great many of Uayma’s workforce are bused to the Mayan Riviera, to work the hotel, restaurant and construction jobs that tourism brings. Many others work in one of the two maquiladoras (factories) located just outside town, stitching together jeans and tshirts. Still others continue to cultivate the fields as they have for generations, to harvest corn, beans and fruit. By all accounts, there are no pobres (poor people) in Uayma, and the folks we encountered displayed an air of tranquility and confidence that would be expected from a Norman Rockwell painting.

The centerpiece of this peaceful town is the recently completed restoration of the cathedral, one of the most unique in Yucatan. We talked to the caretaker, Ruben, about the history of the church. He told us that Uayma had been an important religious center for the Maya and when the Spaniards arrived, they used stones of nearby archaeological sites – including Chichen Itza – to construct a Templo Mariano, or temple for the worship of La Virgen. The Franciscan order converted this into a convent and named Santo Domingo (Saint Dominic) the patrón, or patron saint, of Uayma. As years went by, the secular clergy of Uayma converted the convent into the town’s church.

During the Yucatan Caste War of the middle 19th century, the Cruzob Maya from the southern part of the peninsula tried to destroy any evidence of colonial rule in Yucatan, including Uayma’s Franciscan ex-convent. Other artifacts of the Caste War can be seen around the town of Uayma, where all colonial structures – including the train station – have been left to crumble into dust.

Several years ago, many special colonial structures around Yucatan were identified and restored through the efforts of Elba Villareal de Garcia Ponce and Fernando Garces Fierros, through both a private program called Adopte una Obra de Arte (Adopt a Work of Art) and the government’s Institute of Anthropology and History (INAH). One of the lucky recipients of this effort was Uayma’s ex-convent. One look at the rosette facade will tell you why. There’s simply nothing else like it in Yucatan.

Although the beauty of the church speaks for itself, there is an unusual juxtaposition of symbolism that we were unable to decipher. Many of the churches and cathedrals of Yucatan were made from stones taken from Mayan sites, but this church is rather unique in that several stones from a Mayan façade are reassembled and prominently mounted above the entrance. Above these is a representation of the double-headed eagle, which would easily be explained as an element of the Hapsburg coat of arms - the power behind the Spanish throne at the time - except this symbol does not appear anywhere else in Yucatan that we have seen. Was this symbol a private embellishment or did it have a special meaning to the local Maya as well? And what about all those rosettes? Are these an adaptation of a Mayan design, or are they derived from the Golden Chains of Navarre, an important element in the Spanish coat of arms? And why was the founder of the Dominican Order, whose tiny statue is mounted at the top of the church’s façade, named the Patrón of a convent built by the Franciscans? So many mysteries, so little time.

After a tour of the town center and the church, we spent some time letting the dogs play with some of the children in the park, then letting the children play with our cameras. Much of Uayma’s population is hidden alongside roads that snake into the jungle, so we ventured back through some of these neighborhoods, as well. We met some lovely Uaymanians (Uaymatecos? Uaymanos?) who seemed to bear out our initial impression of a friendly and peaceful town. We had visions of building a country home in an abandoned building on a back street. We were told that the government of Yucatan is including this town as one of the attractions on a tour route that includes the nearby colonial city of Valladolid and the Mayan ruins at Ek Balam. At the very least we certainly plan to come back and enjoy the activities leading up to their fiesta on August 8th, the feast day of Santo Domingo.

While we may never solve the mysteries of Uayma’s church, one important mystery was explained before we left. According to Ruben, the town’s name is a Maya contraction that means agua del huayo, or water from fruit, or to put it more simply: juice. Okay, maybe we're not experts in Mayan translation, but we're not convinced. We didn't see any NO FEAR surf shops in Uayma, but we didn't see any juice vendors either. So the origin of Uayma's name remains a mystery to us... like a lot of things around here. 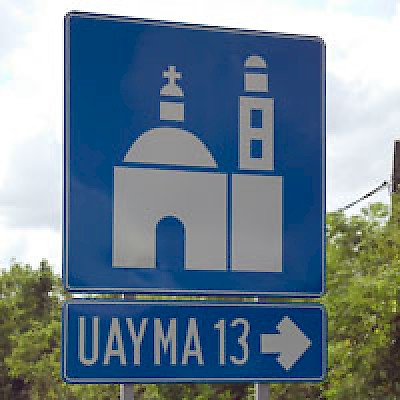 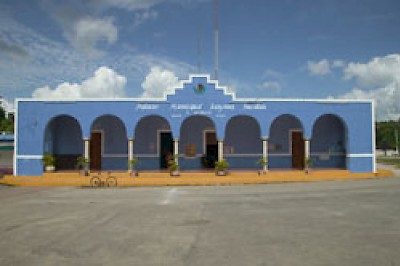 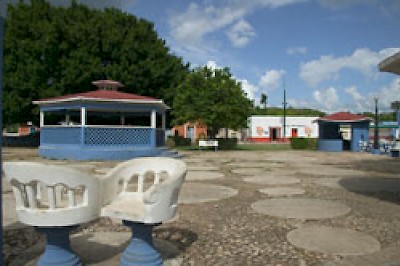 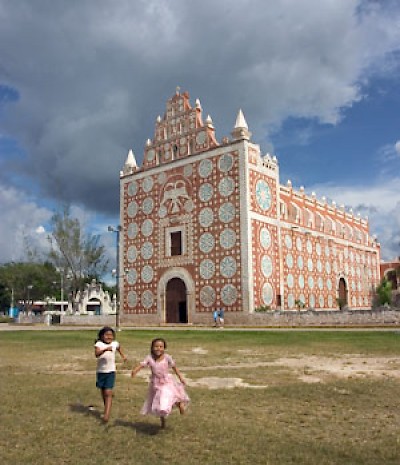 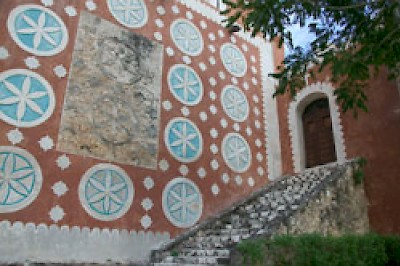 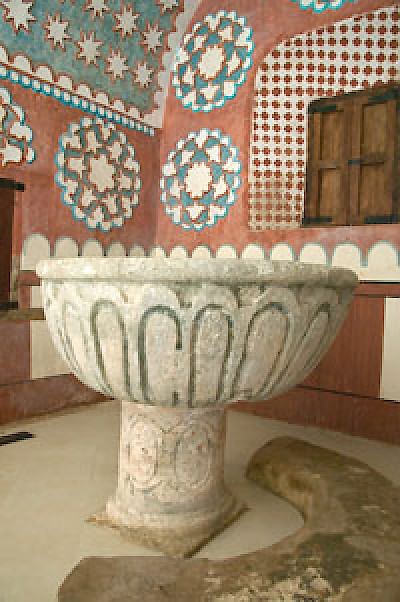 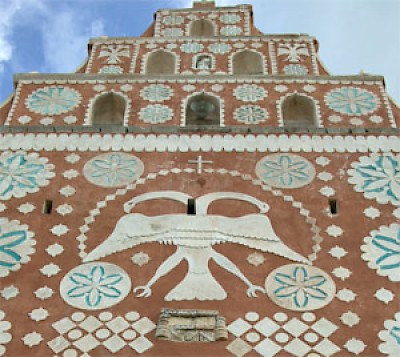 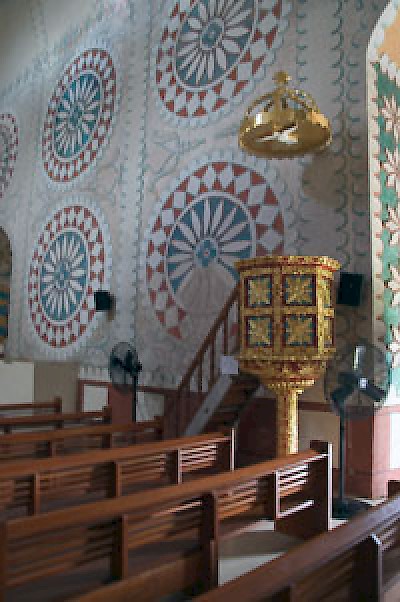