What can we say about Cancun that hasn't been said a million times already? Plenty!

We've been to Cancun more than most, since we live only three hours away (okay, four hours if you count stopping halfway for some cochinita tacos and a capuccino). We go to Cancun to enjoy some of the Western World's best shopping, some great restaurants, and yes, those beautiful white sand beaches, renovated beyond their original beauty after the devastation of Hurricane Wilma.

Because we live close by, we often take the time to see and do things that visitors who are there for just one week out of the year might not take the time to do or might not know about. And sometimes, we discover something really special. We'd like to share some of our favorite places in Cancun, because we want to make sure they get discovered, frequented and supported. So if you find yourself in Cancun one day, looking for something different to do for the afternoon (especially if you spent a little too much time in the sun the day before), the following are a few of our suggestions of places that are either good or unusual or both.

But before we give you our secrets, let's talk history. Unlike most places that you might visit in the Yucatan, Cancun did not start out as a little pueblito and then grow into the international destination that we all know and love. Cancun was a place where Yucatecans fished and enjoyed the beach, but it was never much of a town. One day in the 1960's, the Mexican government under President Echeverria decided that all those sandy white beaches ought to be put to good use. The master plan to turn Cancun into an international tourist destination was agreed upon in 1969 and building began in the 1970's. Despite initial skepticism, which forced the Mexican government to finance the first eight hotels built there, eventually Cancun caught the imagination of people around the world. And the rest, as they say, is history... though a fairly recent history in these parts.

By 1976, Cancun had 18,000 inhabitants. By 1982, there were 70,000 people living there and the number has been growing ever since. In 2006, over half a million people call Cancun home. And more than 8 and a half million people go to or through Cancun on vacation from around the world. That's one mega-city every year! And despite that, those beaches are still white, clean and beautiful... and not crowded.

What you need to know about the layout of Cancun is that there is the city proper, whose center is roughly where Avenida Tulum and Avenida Uxmal cross. And then there is the Zona Hotelera (the Hotel Zone), where most of the hotels and beaches can be found. Between the Zona Hotelera and the city proper is a huge lagoon. The Zona Hotelera is in the shape of an arm, bent at the elbow. And it connects to the mainland at both the hand and the shoulder. At one end is the city of Cancun, and at the other end is the airport. There is also a highway that goes directly from the airport to the city. The Zona Hotelera is numbered by kilometers (KM) with the lowest numbers toward the city and the highest numbers toward the airport. To drive the entire Hotel Zone will take you almost an hour, depending on traffic.

The people who come and stay in downtown Cancun are a small fraction of the millions who flock here every year from all over the planet. Most people who come to Cancun go straight to the Hotel Zone to be pampered, tanned and indulged in Cancun's ever-increasing number of incredibly luxurious all-inclusive hotels, where all their needs are catered to by English-speaking Mexicans. When they venture out of their hotels, they find gourmet restaurants, brand-name stores, artesanias selling handcrafted goods at tourist prices, high class jewelry stores and some very modern shopping centers. Students who come on Spring Break find a lot of bars and nightclubs. People also come to Cancun to get married on the beach or in one of the new super-luxurious hotels, or for their honeymoon. Cancun's Zona Hotelera also hosts conventions, golf tournaments, concerts and even G8 meetings.

A few people fly into Cancun only briefly on their way to other parts of the Yucatan, anywhere from Playa del Carmen to Chetumal, Belize, Merida, etc. For those people, or for those who want the Cancun experience but in an economically-priced hotel, the city of Cancun on the mainland has some good choices. It is a 15 minute drive from the airport, and once you are there, hotels, restaurants and the bus station are all within comfortable walking distance. One of our favorite hotels in downtown Cancun is the El Rey de Caribe, a charming and well-kept small hotel with a pool and jacuzzi (between $50 and $75 US per night). We've also stayed at the Hotel Plaza Kokai, where $50 US bought an average room that was clean and air-conditioned, and tiled everywhere in white marble. The restaurant was very Sixties (probably when this hotel was built), with wood paneling and a nautical theme. Ahoy, there, Gilligan! There's also a beautiful Radisson Hotel nearby, as well as a few good hostels (Blue Hostal and Mexico Hostels are right across the street from each other, near the corner of Avenida Tulum and Avenida Uxmal). There are some great restaurants in the same area, including Habichuela on Margaritas Street , an award-winning restaurant with Caribbean seafood and Mexican dishes and Yamamoto, a Japanese restaurant that has been serving exceptional sushi and Japanese fare for fifteen years. Not only do you get great food there, but you get the extra added attraction of being served by people who look completely Japanese but speak flawless Spanish.

At the start of Avenida Kukulkan, the main avenue that travels the length of Cancun's Zona Hotelera, is the Embarcadero at KM 4. (If you remember the numbering scheme, that places the Embarcadero at 4 kilo-meters from the northern entrance to the zone). From there, boats travel regularly to Isla Mujeres, a wonderful island paradise off the coast ($165-180 pesos roundtrip for a 20-minute ride each way). There is also a theatre where Mexican comics and singers perform. And parked at the dock are Captain Hook's pirate ships, a definite favorite with young boys and girls, either just to visit or to go sailing on one for a dinner cruise. Dinner cruises leave at 7 pm and return at 10:30 pm. They serve steak and lobster and cruise Cancun Bay, with the boat lit up like a Christmas tree.

Hidden away on the second floor of the Embarcadero, is probably the most extensive collection of Mexican arts and crafts to be seen outside of Mexico City. La Casa del Arte Popular Mexicano (The House of Popular Mexican Art) is probably one of our personal favorite places in all of Cancun. If you are looking for some authentic Mexico in the midst of the international resort destination that is Cancun, this is the place to start.

One woman, Gabriela Padilla de la Parra, has spent her life collecting everything from masks to musical instruments, painted gourds, Virgen de Guadalupe statues, costumes, carvings, kitchen utensils... you name it. If it was made by hand in Mexico, an example or fifty of them are probably in this museum. The fact that one woman alone bought all this art is enough to make you sit and think.

There is no way to describe the richness, the color, the joy and the beauty of all of this folk art in one room. It can bring you to tears. Many of the obras del arte (works of art) were made by the indigenous peoples of Mexico and are tactile physical evidence of the richness of the culture and heritage that the Mexican people (and those of us who live here) are so proud of. If you are looking for something to do with children or teenagers, we highly recommend it. They will be fascinated and delighted by the colorful exhibit, especially the entire room full of handmade toys. The collection is very nicely displayed, and a free self-guided tour can be taken by wearing a headset as you walk around. The tour is available in English, Spanish and French for now, with more languages coming soon. To top it all off, there is a lovely store as you walk into the museum, where you can buy recently-created versions of many of the handicrafts that you see in the museum. In our opinion, it is by far the best place to shop in Cancun for quality souvenirs.

If you are feeling adventurous and willing to get out of the Zona Hotelera, there are many things to do that are just a daytrip from Cancun. You'll probably want to rent a car for these, though some things can be done with tour groups or by bus or taxi. You can visit the popular towns of Playa del Carmen, Puerto Aventuras, Akumal or even Tulum. Tours are available, of course, to the nearby Mayan ruins of Chichen Itza, Tulum, Ek Balam or Coba. Quickly becoming-famous ecoparks like Xel-Ha (pronounced Shell-Ha) or Xcaret (pronounced Shkar-ett) provide ways to safely explore lagoons, underwater rivers and jungles or to swim with dolphins. They are great places to visit when temperatures are high. Close by (just at the south end of the Zona Hotelera), Wet'n Wild (formerly Parque Nizuc) and Atlantida also provide water-related activities for children and grownups.

One of our favorite activities is the Crococun Zoo. For years, we drove by on our way to or from Cancun and Playa del Carmen, promising each other that we would go check it out next time. Finally, we actually did. Crococun Zoo is a family-operated crocodile rescue facility just 31 kilometers south of Cancun (15 minutes). They call themselves an "interactive zoo" because they give kids (and grownups) a chance to see and touch crocodiles, tropical birds, hairless dogs, native deer, reptiles and monkeys. There is nothing like the amazement on the face of a five-year-old who gets to hold a boa constrictor, pet a dog with no hair or feed a baby deer.

We're rather partial to this place because not only does it rescue animals that are being threatened by the continual encroachment of development on the Mayan Riviera, but it is still run by the same family that started it. It isn't a huge place, but it is administered with a loving heart and it is the kind of place our parents used to take us when we were children (like the Catskill Game Farm in upstate New York, Yucatan-style!). Visiting these animals opens your eyes to the abundant nature of the Yucatan, and it's a perfect outing for small children who just can't be in the sun all day!

There's no excuse for boredom in Cancun... although we admit, that beautiful white sandy beach next to that clear blue Caribbean Sea is a great excuse for just sitting around doing nothing (which is not boring).

If you have any favorite or unusual places to visit in Cancun, please share yours too! If you want to find out more about Cancun from other visitors, visit TripAdvisor.

Editors Note: When we went to look up the URL for the Catskill Game Farm, we found a notice that said it was closing as of October 9 2006. It is indeed the end of an era. Let's hope the Crococun Zoo can survive longer. 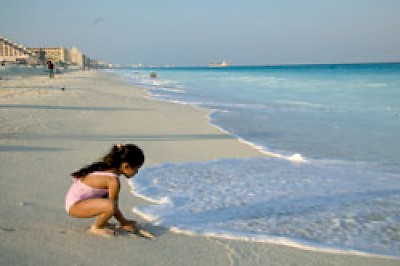 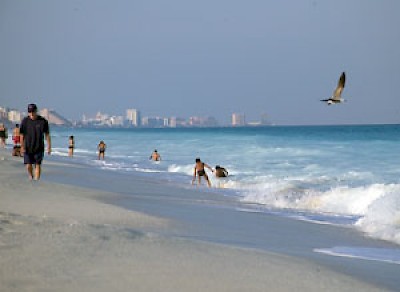 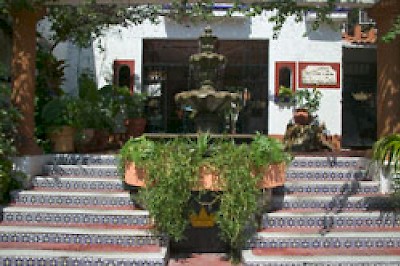 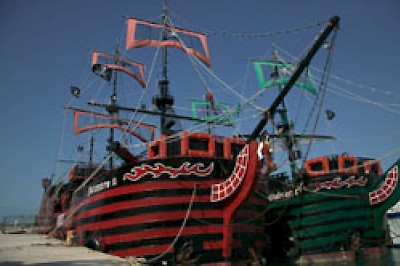 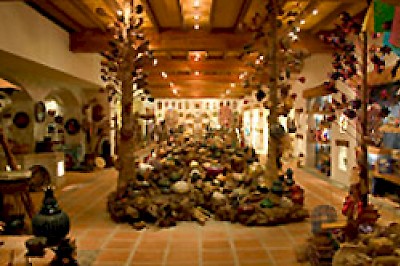 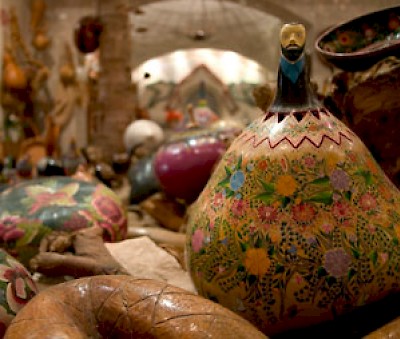 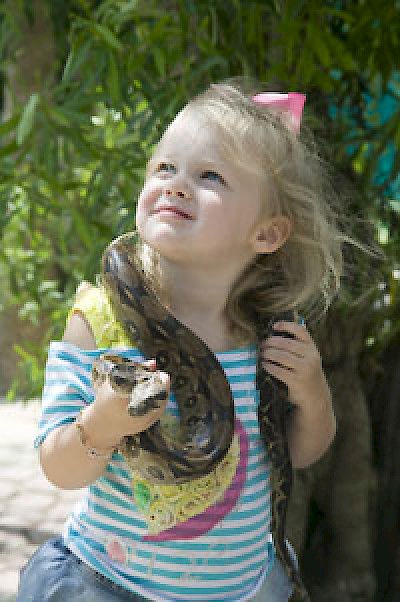 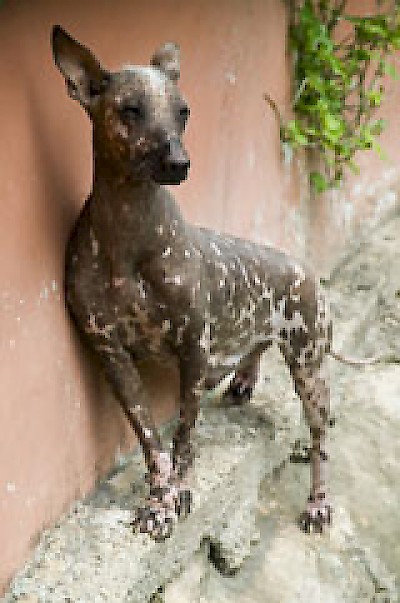