The last time we traveled back to California, we found ourselves sitting at a stoplight in our car and feeling rather thirsty. We were suddenly struck by the absence of something we have come to expect and even appreciate here in Mexico: the stoplight entrepreneurs. We were reminded how, during our initial roadtrip from California to the Yucatan, we were amazed at the level of entrepreneurship in Mexico. Everywhere we went, we were surrounded by small, smaller and even the tiniest of businesses. There are of course the ever-present cocinas economicas, the little restaurants with three or four tables that serve just two or three meal choices during the middle of the day. There are the tendejons, the corner stores, long since replaced in the States by 7-11's. There are the door-to-door salesmen, offering everything from potting soil to handmade brooms and furniture to frozen shimp. And everywhere, there are people selling you things at los semáforos, the stoplights.

We thought it might be interesting to list all the things that we are offered here in Merida while we sit in our car waiting for the light to change. Here is a partial list:

At a really good long stoplight, a driver might be offered three or four of these items by various sellers walking up and down the line of cars. In more rural parts of the Yucatan and Mexico, entrepreneurs even go so far as to create topes by putting thick ropes in the road, causing drivers to slow down and thereby creating their own selling opportunity.

And then there are the performers. Clowns are the most popular form of entertainment. They step in front of the stopped line of cars, dressed in the most outrageous costumes, and always with a red nose. They juggle for 30 seconds, and then they dart between the cars to collect their reward.

We would guess there are no laws against soliciting money from automobile drivers. We would also guess that some corners are better than others and must be hotly contested or defended. Various corners in Merida seem to have the same people there, day in and out, for months or years. 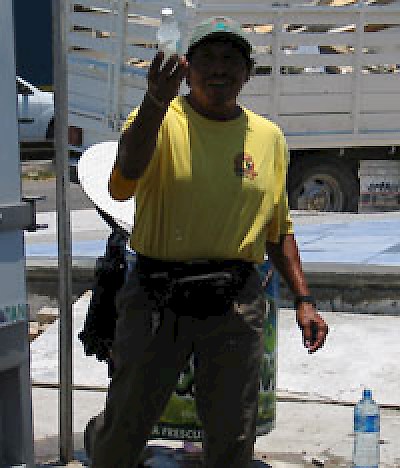 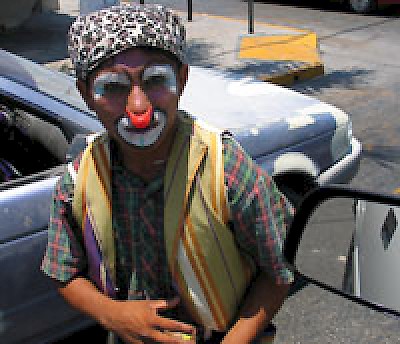