Inside a Maya Family Compound

In his cupped hands he holds a baby turkey, a poult, only a few weeks old. It has a piece of red wool drawn through the skin on the top of its head which stands up, as if the poult sports a modern hairstyle.

“This red string is to ward off evil spirits and keep the baby turkey healthy,” says Abel who lives in this Maya family compound. “Only four out of ten baby turkeys will survive.”

We are guests inside Abel’s family compound located in Santa Elena, a Maya village along the Ruta Puuc (hilly route) in the southern part of Yucatan state in Mexico. Abel is one of eight in a family still led by his father, 72, and his mother, 62. Numerous other relatives, including Abel, his wife and two children, live there. The International Women’s Club of Merida is supporting an awareness initiative focusing on the needs of these people.

The Maya have a history of about 3,000 years in the Yucatan Peninsula. Today, just as in ancient times, their basic food source is corn. Abel explains how the very dry and colder than unusual fall season has taken its toll. Corn production was reduced by more than 30 percent; honey production reduced by over 40 percent. “60 percent of the people in Santa Elena work in the honey industry,” he says. No rain meant corn plants shrivelled; fewer flowers and cold temperatures “kept the bees in the hives” living on their own honey. With no product to sell, while still forced to buy corn for tortillas and poultry feed, the proudly independent people of Santa Elena are facing an economic crisis.

The Maya compound is built on bare earth surrounded by a carefully and artfully constructed wall of loose stones and rocks, a staple of the Yucatan countryside. Abel invites us into his functional oval-shaped Maya home constructed of stone and stucco with a roof of palapa (palm fronds). The traditional Maya house is a single room with rounded corners, no windows, and one central door built to face east.

“My father built our home 57 years ago,” he says with justifiable pride, “and the roof has only been replaced twice.” A hammock hangs from the poles and beneath our feet, the earthen floor. It won’t be long, though, before the earth floor is replaced by cement, thanks to a government project.

It also won’t be long before the traditional Maya home will be a reminder of the past, however. Abel mentions that each year 400 villagers head to the U.S. as migrant farm workers and each year they return with new ideas for modernizing their homes.

We move on to the cooking hut adjacent to the Maya home where Abel’s female relatives are cooking tortillas on a flat grill set over rocks. After removing them from the heat they are dusted with salt. Rolled like a cigar, warm tortillas are offered as a tasty reminder of our visit. Corn tortillas, prepared in the traditional way, are delicious! Hollowed out large gourds from the garden are used to keep the tortillas warm while smaller gourds are used as drinking cups set on a holder of intertwined vines. Every possible gift from nature is used.

We walk to the batea (laundry shelter). Ashes from the cooking fires are placed in buckets of water to soften the hard water native to this area. Then clothes are individually pounded and washed on a table-high stone counter with lots of elbow grease and a hard bar of soap. A shower is a bucket of water poured over the body along with a solid scrub of soap suds. In an environment of mostly earth, the older women are adorned in snow-white huipiles (traditional dress) edged in embroidered, brightly-colored patterns while the younger ones favour western dress.

Roaming turkeys, chickens, pigs and puppies share the earthen compound. Pigs are highly valued and when ready for market, the word spreads quickly throughout the village. Often a piglet is given to another family to encourage self-sufficiency. Turkeys fattened on corn, and tortilla dough provides additional income.

Every other day or so, members of the family take their tricicleta (three-wheeled cart) out to a nearby forest to collect wood for cooking. This is their only source of fuel, and if you have driven into the Yucatecan countryside, you can see the neat bundles of wood ready for collection by the side of the road.

When there is corn to harvest, the family picks and shucks the dried corn kernels. The next morning the women take a bucket of corn kernels to the local tortilleria in exchange for masa (corn flour) from which come those delicious tortillas. Kernels are no longer ground by hand because even the smallest village seems to have its own tortilleria.

As he moves about the compound, Abel is obviously proud of his Maya heritage and of the independence of his people. They are warm and welcoming and as curious about us as we are of them. To get over the current economic slump, however, they can get by with a little help from their friends. 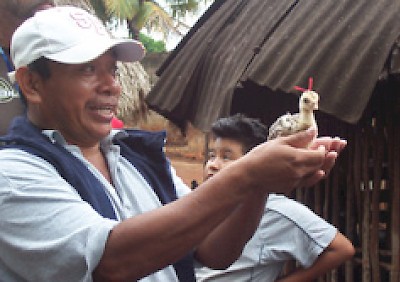 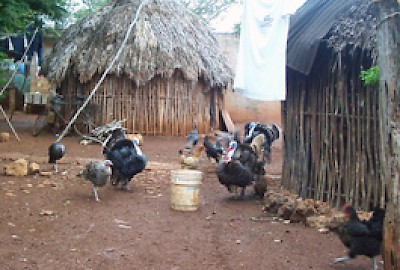 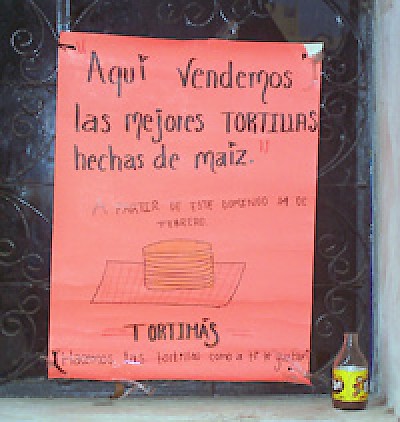 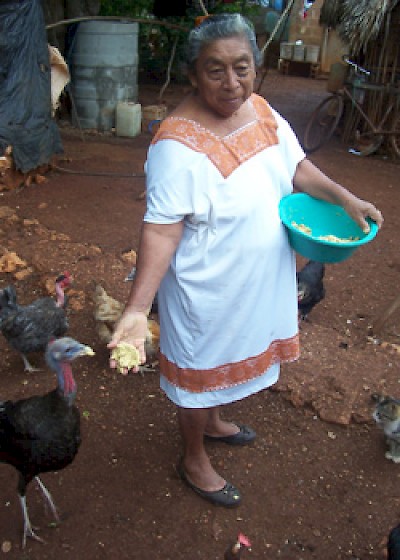 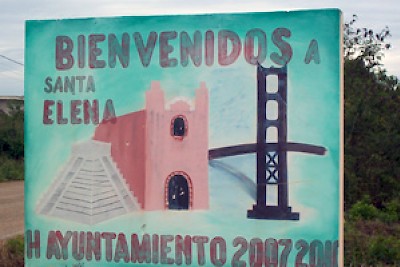