With all the beautiful sun and rain we have here in the Yucatan, it isn't unusual that a transplanted norteamericano's thoughts would turn to gardening. When we first moved here from California, we were amazed at how fast everything grew here... palm trees planted at chest-high size one year were towering over us the next. Our ceiba tree planted when it was six feet tall towers over the two story house only three years later. After enjoying watching the trees, vines and flowers of the Yucatan grow so abundantly, we started to plant seeds... tomato, watermelon, peppers. One year, some of those tomato plants grew almost without any care at all and we daily picked enough cherry tomatoes to put in our salads. A volunteer watermelon grew in the planter upstairs until it was the size of a basketball and it tasted pretty good too.

How Did Our Garden Grow?

With these, we were lucky. We found, however, as we started to plant in earnest (but not really with much planning or forethought), that growing fruits and vegetables in the Yucatan climate is not as easy as one might think. If the nematodes or army ants don't destroy your plants, the hot midday sun or the caracoles (snails) will. We tried putting a small planter on our rooftop, recognizing the abundance of sun there, but even that didn't work as well as we had hoped. It was difficult to keep the planter wet enough to arm the plants against that strong sunlight, and though we did get some more cherry tomatoes, there was nothing much else that we were able to coax out of our rooftop experiment. As we didn't have a lot of time to garden, we became discouraged and resigned to buying all our edibles at the mercados.

Then one day, we happened to visit Robert and Tonia Kimsey, friends of our who retired here from Florida. At one point, the conversation turned to gardening and Robert was kind enough to take us up on his roof to show us his vegetable garden. To say we were amazed would be an understatment... we were blown away by the cleverness of his system and the abundance of his plants. Corn, lettuce, okra, tomatoes, multiple herbs... it was all growing in Robert's planters on his roof.

As it turns out, Robert, a real estate developer, comes from a family of gardeners. He tells the story best:

"During WWII, most families who were patriotic planted a "Victory Garden". My father was one who took that seriously. Even though we lived just off the Emory University campus in a nice neighborhood (in Georgia), every spring he would hire a mule and plow to come turn the soil, getting all the organic material plowed under in preparation for a garden. The whole family would work together to make furrows, put in well-rotted cow and horse manure, and then plant the seeds. The gardens were usually about twenty feet by forty feet, sometimes larger, but seldom smaller."

Robert notes that today's gardens have changed a lot, and the amount of information at anyone's fingertips has grown. Have a question about fertilizer? pests? harvesting? Just Google it.

But the type of information that is sorely missing for anyone living in Yucatan is information about how to raise fruits and vegetables in this climate. Because, as anyone who has lived here for very long will tell you, the climate of Merida and the Yucatan Peninsula is tricky. In fact, the climate here is technically called a tropical desert. "What??", you ask. How can that be? Merida in fact has two sets of two seasons: two rainy seasons and two dry seasons. Gardening can be quite tricky in that situation.

Never one to back down from a challenge, Robert spent a few brain cells and some investigative months figuring out how he was going to have a Victory garden at his renovated colonial home in Merida. He realized that while he didn't have a lot of land, or even a lot of soil for that matter, he did have a large and flat roof. He combined that asset with information his daughter told him about the Earthbox (see link at the end of the article). He tossed in his experience in Italy, visiting Puccini's home where his rooftop garden was all built at waist height, so he didn't have to bend down. And with all that composting in his active brain, he came up with what has proven to be a successful and productive roof garden system.

What Robert has devised on his roof is a system of waist-high containers. He has two beds that are 33 cm wide and 3.2 meters long, and four that are 56 cm wide and 2.35 meters long. All of them are at a working height of 90 cm. The depth of the soil is 32 cm, and there is 8 cm of water below the soil, for a total depth of 40 cm. These cement containers have a system of watering and drainage built in, so that Robert has only to turn on some hoses to water all this plants. The containers are empty in the bottom third (where the water is), and the top two thirds of each container is well-composted, dried-in-the-sun (to kill the pests) soil, piled atop a layer of wire mesh. This system allows the plants to grow in the dirt without the dirt getting soggy (a real problem in the rainy seasons), while still receiving adequate water from the reservoir below.

There are, of course, a few things you need to consider to be able to create this type of gardening system. First of all, your roof must be flat and it must be strong. You must carefully construct your planters so that you do not damage the roof when you build or use them. He suggests you do not construct the planters so that they rest on the roof, but instead, elevate them as he has done, both for accessibility and for a smaller footprint on the roof itself. Another thing to ensure is easy roof access. You will be going up and down from the roof with bags of cement, dirt, plants, pots and who knows what else. This will be a lot easier if you have a safe and comfortable stairway to use.

When planning the layout of the beds, you should keep in mind that most vegetables require six to eight hours of sunshine per day. So find the sunny spots on your roof and build your planters there. Most of these also need good ventilation in order to support the pollination process. The light breezes that are fairly constant in Merida above the first story are perfect, so just be sure to build where those breezes are not blocked.

For six constructed beds of concrete and concrete block, with a manual watering system, you will need the following materials:

As you can see, Robert is suggesting that with a simple design and instructions, you can have a local albañil construct these planters. The cost will be minimum, you will be supporting a local family and the work will get done with a minimum of backbreaking effort on your part.

This article is not meant to be a do-it-yourself guide to building these planters. Suffice it to say, it can be done with materials and labor easily available to you here in Merida. Once the planters are created, the plumbing is installed, the dirt is in and the seeds are planted, you can then begin the activity that got you started with all this... you can be a gardener! Yes, even here in Merida, with this system you can grow onions, carrots, eggplant, tomatoes, spinach, lettuce, corn, okra, broccoli, a multitude of herbs and probably other things that Robert has not yet attempted. All those vegetables listed are ones that Robert has grown on his roof during one year, with plenty left over to pass around to friends. When you go up on that roof and look around, it seems like nothing short of a miracle.

As it turns out, there are a lot of people in Merida interested in this kind of gardening. So interested, in fact, that twenty six people gathered at Robert's house on October 15, 2011 to start a club to discuss "Merida's gardening problems". For now, Robert's wife Tonia is calling it 'Conversations on Merida Gardening' and from all accounts, it is an intelligent and impassioned conversation. Robert says that this group is far from a typical garden club and since we looked carefully at the photos and didn't see any crustless cucumber-and-creamcheese sandwiches, we would have to agree. We know a lot of the participants, and we're sure that they are there because they mean business.

The first discussion with this illustrious group included some of the following subjects:

As you can see, the conversation is already wide-ranging and full of good information. The next meeting is scheduled for Saturday, October 29. The group hopes to begin putting together a list of plants that the group wants to grow in order to create a supply chain of seeds, seedlings and other required materials.

Whether you are here in Merida, or just planning to be here, you can join in the conversation. Robert's contact information is below and you can contact him directly if you would like to join the club. If there is enough interest, we will in fact work with Robert to publish more detailed instructions on how to build these planters, so let us know by commenting below. We look forward to hearing from you and we look forward to a proliferation of homegrown rooftop vegetables in Merida!

Robert Kimsey can be reached at rkimsey33@gmail.com.

Want to know where he got his ingenious idea for the planters? Go to www.earthbox.com 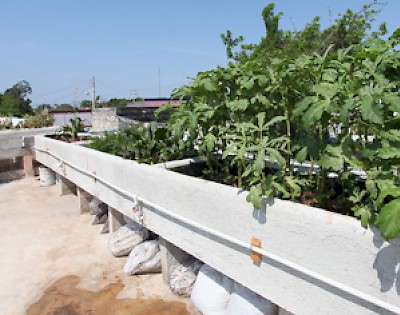 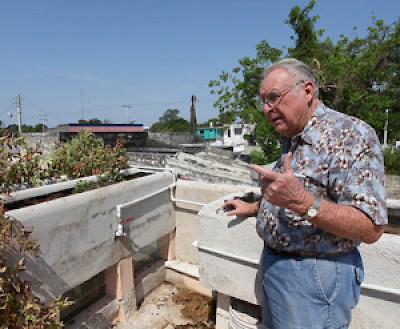 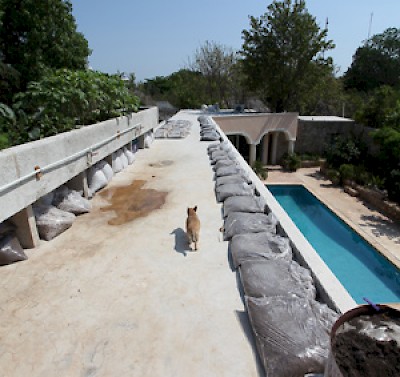 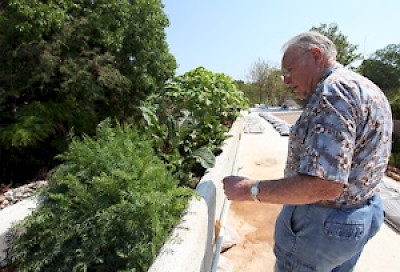 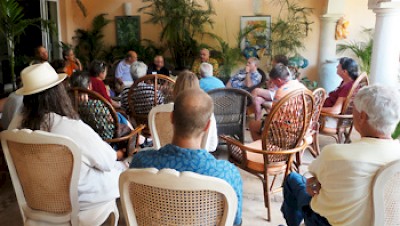 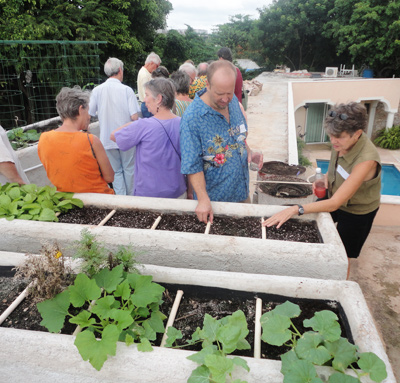