If you've been paying attention during the last month or so, you probably know that Barack Obama called for all Americans to participate in a service project before his Inauguration, and he chose Martin Luther King Day (January 19) as the day for that participation. Here in Merida, a group of expat Americans decided to accept Obama's challenge, and we met a few times (read about our first meeting here) to meet each other, decide what to do and to organize our event.

The group decided to provide the Carlos Castro Morales primaria (grammar school) (at Calle 82 at the corner of Calle 61) with books for their library. Upon visiting with the directora of the school, Martha Lindley and the others discovered that the library had some books, but no tables to read at or chairs for the children to sit on. So, over the past few weeks, various members of the group donated and raised money, bought unfinished wood stools and tables, sanded and painted the tables and stools, composed and created a bookplate which was affixed to 75 books, and delivered the whole package to the school.

Today, January 19, the school formally announced the gift to the children, and invited those of us who had participated to attend the event. We showed up promptly at 8 am, and the school assembly was already in full swing (kids start school here at 7 am). After listening and watching the color guard go through it's paces, and the whole school sing the national anthem, the directora, Maria Elena, told the children why we were here and thanked us profusely. No hay palabras, she said over and over. There are no words. Our representative Martha Lindley gave a short speech in Spanish about why we were doing this. She told the kids about Barack Obama, that he was going to become President tomorrow, that he was born to a father from Africa and a mother from the United States, and that he and we believed that reading is very important. Martha was followed by the Superintendent, Mildret, who also thanked us.

When the speeches were over, we all headed over to the little library, where the tables and stools had been installed the weekend before. A delicate pink ribbon had been affixed to the doorway, awaiting scissors and ceremony. Two of the smallest children were selected and they, and the directora cut the ribbon on the count of three. A photographer from the Diario was there to also capture the event, and of course, almost all the expats had their digital cameras with them as well.

The kids were extremely polite as they walked in and sat down at the tables that were just their size. The directora and superintendent both explained to them how lucky they were to have these nice new things, and that it was important to take care of all them... not to write on the books or the furniture, but to respect them because they had been given as a gift. The superintendent also read aloud to them the inscription on the bookplate that had been affixed inside each book:

"We have an obligation and a responsibility to be investing in our students and our schools..." -Barack Obama

Donated by Friends of Obama in Merida in honor of the inauguration of Barack Obama as the 44th President of the United States of America.

The kids seemed pleased and happy. As schoolkids around here tend to do, they practiced their English with us by calling out their names ("My name is Julio!") and saying Good Morning, but in general were a very well-behaved group of first and second graders.

After about ten minutes of reading out loud and demonstrating some of the books that we had brought to the school, the superintendent invited all the visiting expats to a small snack in the teacher's room. There they had laid out a table with a lovely lace tablecloth, surrounded by chairs in various states of stability. It seemed obvious to us that they weren't used to this kind of a crowd. We were seated and then served a breakfast of tamales, rice and a roll, washed down by our choice of Coke or diet Coke. And then sweet pastries for dessert. Before we ate, a toast of Coke cans and bottles was raised to Barack Obama.

Discussion around the table ranged from how long we had all been in Merida (from 2 months to 15 years), where we had come from (Seattle, San Francisco, etc.), and how we liked Merida. We talked about how we don't usually eat so much for breakfast, how the Superintendent managed 13 schools (including schools in the Santiago and San Sebastian districts) and how the directora had been here a year, and had come from Uman.

One of our crew found out that the school only had one poorly working computer. He is handy with computers and said that he can make a working computer out of a few non-working computers. It seemed by the end of the morning that he had found himself a new project. We also discussed the ever-present need for English instruction, and the lack of it in the lower grades. And how, where there was any English instruction, the instructor was not a native speaker and therefore, could not teach pronunciation and other important elements of the language. Ideas were forming... we're sure that some of this information will find its way into new projects in the future.

During breakfast, a reporter from Notimex, the Mexican version of Reuters News Agency, came to interview us... about our service project, why we were doing it, what we thought of Barack Obama, why we live in Mexico, etc. We sent him photos and we were told a story about this event would be on the wire this evening. Judging from the attendance by a photographer from the Diario de Yucatan, we're pretty sure this will be in the local newspaper as well.

The song was over, the ceremonies were completed and it was time to say goodbye and let the kids get on with the work of learning. As we walked out through the school, from inside every classroom, children waved and called good-bye. We felt like visiting royalty, and all left with smiles on our faces and an inner commitment to do more.

Working Gringa wore a tshirt to the event that says it all for us, on the eve of the inauguration of our 44th President: OBAMANOS! Let's continue to serve our community, wherever we find ourselves in the world, and let's make history doing it!

It's not too late to get involved with this service-oriented group. Everyone is welcome, American and otherwise. If you would like to participate, email martha.lindley@gmail.com to be put on our mailing list so you can be notified about the next meeting. 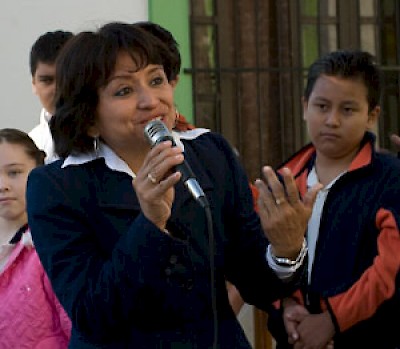 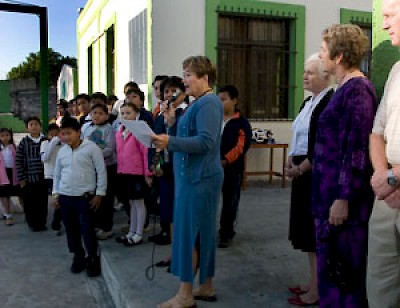 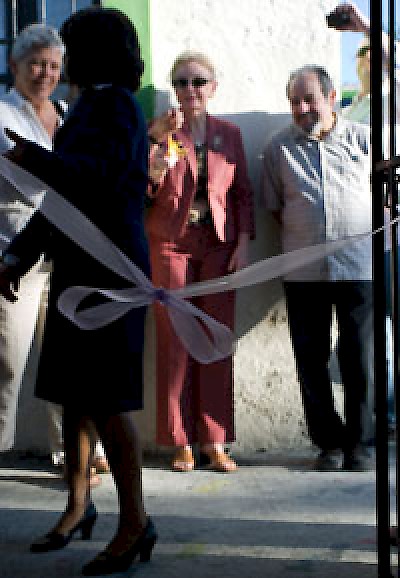 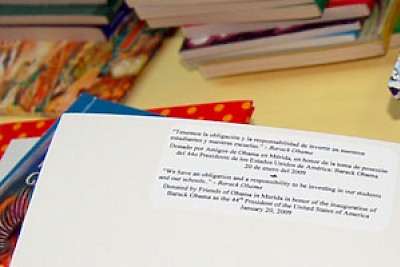 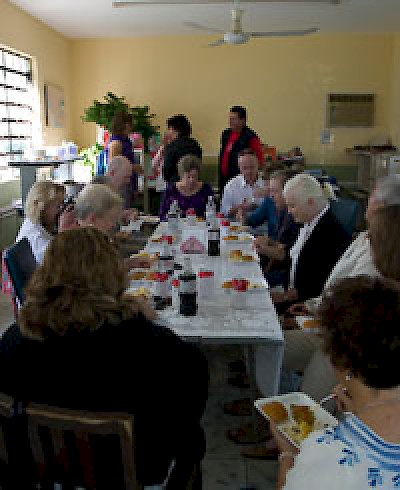 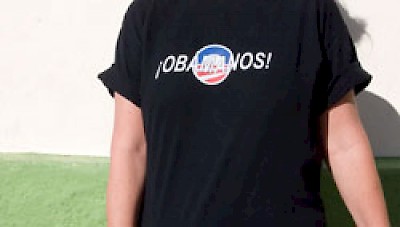