Yesterday morning, we called the number on the stoven flyer to make an appointment. We were happy to learn that the stoven repairman would indeed *make* an appointment. It is customary here for people and businesses to say they will show up on a certain day, but they are usually unwilling to commit to a time. They don't think you have a problem with this because they assume that either you are at home all day or your housekeeper is. In our case neither is true, so finding someone who will make an appointment is a big plus.

Yet, while the stoven repairman was more than willing to *make* an appointment, he was a bit less punctual keeping it as Yucatan custom allows, which means he was about two hours late. So we sent our trusty office assistant, Beatriz, to meet him at the house so she could introduce him to the stoven and pay him when the work was done.

As it turned out, the stoven repairman was actually a team of three people: an old man in his seventies, his middle-aged son and a younger man. The old man was obviously in charge and was apparently the one with the idea for the new business. The son was the one who spoke English and who wrote the flyer. He told Beatriz that they had put the flyer all around our neighborhood, Colonia Santa Ana, and had received at least two other jobs from it. The third young man was, as Beatriz put it, the one who did all the work.

They worked for a little less than an hour, replacing the electrical spark plugs (these must have an accurate name, but you get the idea) on each of the burners. The young man performed a lot of worthwhile service during all this activity. He washed everything well and very meticulously left nothing out of place. At the end of the visit, they charged $450 pesos.*

This struck us as rather expensive by local standards. At least some of the cost was a rico tax or more accurately a gringo tax, the price you pay for living in a nice house and speaking English. We realize we were paying for three highly-qualified stovenistas - including an experienced businessman, an English translator and a stoven mechanic - not to mention the overhead of their charming marketing campaign. We ARE happy to have our finicky stoven starter working again (and it does!). But we'll probably procrastinate before calling team stoven again. Their entrepreneurial spirit is in the right place, but their overhead is higher than our 18 foot ceilings.

*Just to put their rates in perspective, our friend who works at a maquiladora makes $450 pesos for six DAYS of work. A typical albañil (construction worker) here makes about $120 pesos a day. Our plumber charges about $60 pesos an hour and a brand new stoven costs about $2,000 pesos. More to the point, we Working Gringos charge $250 pesos an hour for website development. We may seem like ricos gringos, but economically, somos codo Yucatecos como los demás.

Editors Note: For those of you who don't know what a stoven is, please read this earlier post. 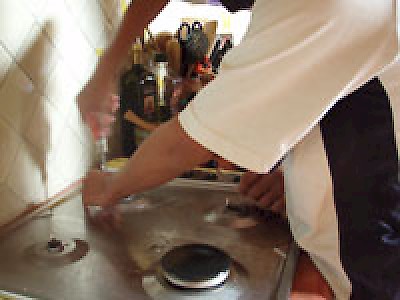 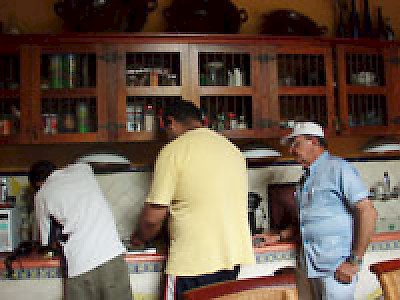