We've been hearing about Don Jorge's organic farm from various friends for awhile, but had no time to go check it out and do it justice with an article. Luckily for us (and for you!), there is Beryl Gorbman, a friend and writer who lives in Merida. The following is her report on the man who grows organic vegetables here in Merida. Enjoy!...

“Don George” (Jorge Armando Solis Hoyos) is a 78-year-old Maya who was born and raised in Merida. His parents were from Peto. Don George says that he quit school early and worked in his parents’ milpa in Merida. Times were hard, he said. If there was no water, there was no food and no money.

When Don George was 18, he went to the USA and labored as a bracero in the fields around Riverside, California. After forty years, he had enough, and came home to Merida to grow produce here. He works with his sons, Victor and Felipe.

Don Jorge speaks a few words of English. For instance when he shouts at his dog to stop barking, he says, Shut Up.

Son Victor works a double shift. He sells the produce at the Merida market early in the day and about 3:30 pm arrives at the ejido to help with the vegetables.

I stopped by there today and bought mint, cilantro, young lettuce, and radishes that I watched him pick from the ground. On a wooden table, he had onions (purple and white), habanero and xcatic chiles, tomatoes and sour oranges from another field he operates. Other seasonal crops include: cebollina, watermelon, cucumber, melons, epazote, basil, squashes, mangos, arugula, various chiles, etc.

Don George and his sons are proud that they use no chemicals (well, almost none). The two acres (one hectare) are lovingly and endlessly tended by both of them. When I visited, they were cooking frijoles in a blackened metal pot on an outdoor woodfire. Roasted Xcatic chiles with lime and garlic were standing by to be added.

They use animal dung for fertilizer. At the Xmatkuil Fair, they bought a truckload of dung, the product of Percheron horses and donkeys. A mountain of kaka.

This wonderful little farm is on ejidal land, south of town on the Xmatkuil road, on the Merida side of the periferico. Go straight down Calle 50 from town, pass Circuito, and get the the left turn lane to turn left at Calle 137. Go one block east on Calle 137 and it’s at the end of the first block, on the right. They have another, larger terreno located nearby.

I’ve been trying to find organic wheat seeds that I can germinate for manna bread, and Felipe says he will hunt them down for me.

Father and son deliver produce in town, so I gave them my address and asked them to come by when they’re in the Sta. Ana area. As Don George was tying up my bags of produce, he smiled and said that this is how it should be – that the people who grow food sell it directly to the the people who eat it.

Beryl's Blog with this story and others about living in Merida can be found at www.gorbman.com. 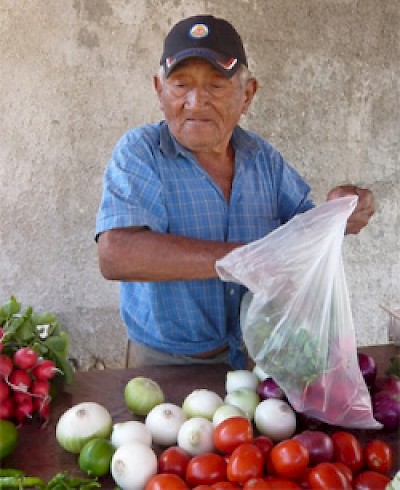 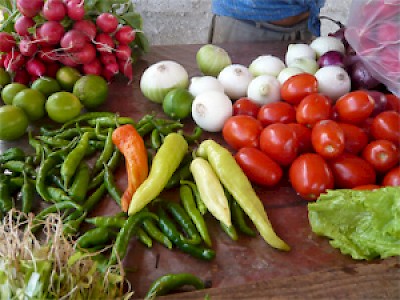 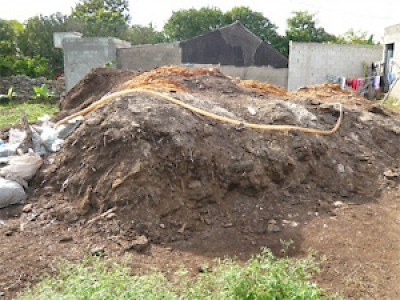 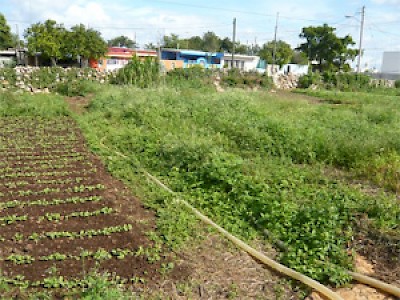