For the last year, daily life for the Working Gringa has started with a walk along Paseo de Montejo with the dogs, URL and Mali.

We try to get out of the house by 6:30 am in order to enjoy the city but avoid the onslaught of buses, cars and heat that all seem to start *their* day about 7 am. Even the schools in Merida (and in the Yucatan, as far as we know) start at 7:00 or 7:30 am so that the students are out and safely home by the time the heat hits its zenith around 1 or 2 pm.

As we follow the same path every day, we find we have become a part of a little slice of Merida life which we find charming, interesting and by now, comforting in its predictability.

We start by walking east down Calle 49. We pass the house where the owner is up every morning before we are, baking kibis, that Yucatecan fast-food dish that can best be described as a deep-fried zeppelin-shaped dumpling. If we're early, we can peek in and see him cooking in his back yard. If we're late, we cross paths with him as he loads them onto the back of his motorbike and rides off into the morning to sell them.

Then we pass a beautiful corner colonial building, newly renovated, and reach the park at the end of Paseo de Montejo, where another colonial building is being renovated into a hotel. This park is where Noche Mexicana is held every Saturday night, when the place is transformed into a mini-entertainment center with a stage for the dance and music acts, a very loud sound system and lots of little booths selling food, hamacas (hammocks), jewelry, clothing and souvenirs. The dogs especially love the park on Sunday mornings, when they sniff for leftover hot dogs and forbidden chicken bones. For the recent Día de la Independencia, the city put up banners in the center garden commemorating early Mexican heroes, as well as a fake cactus, a large hay-filled cart, and a big statue of an eagle with a snake in his mouth, the symbol on the Mexican flag, all lit with twinkly lights. At Christmas, there's a huge (fake) Christmas tree here and a creche that is also lit up at night. But no matter the season, every morning there are two men working to keep the park clean. One of them is very old and apparently deaf. He doesn't smile when we say Buenos Días, but he nods and acknowledges the dogs. The other younger man ignores us completely. Like about half the people we meet, they don't seem to like dogs so we try not to bother them.

Farther on, we pass the Cafetería Impala with its hip 60's era signage and begin our walk along the Paseo. Every morning we see Juan, one of the city-employed men who spend their days sweeping up the leaves and trash along the Paseo, doing their level best to help the city earn it's reputation as the cleanest city in Mexico (we have our reservations... but we acknowledge that Juan works very hard. It's just that the rest of the population discard a lot of garbage on the street, and the trees shed a lot of leaves so Juan and his mates have their work cut out for them). One of the only obviously homeless men we have ever seen in Merida sleeps on a bench along the way, and if he's awake when we walk by, we wave and chat. He's a kind older man who always has a smile for the dogs. On the next block, we say Buenos Días to Jorge, an immigrant from Michoacan who likes dogs and who works as an albañile in a high-rise hotel that is being renovated.

Because we are up before the sun rises, we are often treated to the beautiful sight of the morning sunlight washing over the stately mansions along Paseo de Montejo, some of which are still private homes (like the one in the photo) and some of which have been turned into banks, restaurants, salas de fiesta (places that are rented out for parties) or the U.S. Consulate. All along the way, we enjoy the outdoor sculpture exhibit that has been installed there by the MACAY, Merida's modern art museum. This iteration of the exhibit, which is installed for ten months, has sculptures from Spain as well as other parts of Mexico. We all have our favorites, though the dogs seem to prefer the ones that smell the most, whereas Working Gringa likes the ones that look interesting.

Usually, we see at least one or two of the other regular dog walkers along our way. There's Lia and Mario, a Canadian couple originally from Belize who have lived all over the world thanks to his job with Bechtel, and who have settled here in Merida for retirement with their three dogs Cocoa, Blanca y Negrito. Then there's Lynette, a retired former stock broker from New York City (when being a female stockbroker was unusual) who walks her dog Susie. The day we brought our camera, we even saw Melva and Abel, two artist friends who moved here from Mexico City last year and who, like a lot of people, walk along the Paseo for their morning exercise. There's also some regular street dogs, the most consistent of whom we call Abuelo (grandfather). He's obviously old, a kind of shepherd mix, and though he wants nothing to do with us, he seems to be much loved by all the workers along his route. He sits in front of the Hotel Montejo like he owns the place sometimes, but eventually he saunters up to the mercado at Parque Santa Ana for a meal of handouts and scraps. He would be right at home in the Disney movie, Lady and the Tramp.

As we come back to where we started on Paseo de Montejo, we see the two old men, regulars who we see most mornings, sitting and talking on the bench under the big shade tree. We turn the corner to go down Calle 45 and pass the former home of our friend, Panzer. He was a 1-year old German Shepherd whose owners didn't want him anymore after they moved into another house farther north. They had left him in their old house in the backyard that looked out onto the street. He was fed and had water and shade, but he didn't get much attention. We used to stop and visit with him every morning, bring him treats and play with him, as well as you can play with a dog behind a metal reja (gate). This summer, the owners found him a home with the local police department's K-9 division, which made those of us who loved him very happy and still puzzles some of us who have four feet.

After saying hello to our memories of Panzer, we walk back home through the streets of Merida. By this time, mothers are walking their small children to school and older students are gathering in tendejons (corner stores) buying snacks before going to class. Most people who pass us on the street try to avoid the dogs, and Working Gringa often finds herself assuring them no muerden! (they don't bite). The dogs are very friendly and are sure that everyone they meet is hiding a hot dog somewhere, which tends to scare some people. URL barking at them trying to get them to hand over the hot dog doesn't help, of course.

By this time, buses have started running, the man on the corner is selling newspapers to the cars stopped at the light and the sun is rising above the trees and starting to heat up the streets of the city. We're getting hot and some of our tongues are hanging out.

We arrive back home ready to drink some water and lie down on the cool pasta-tile floors. That would be the dogs of course. Working Gringa hops into the shower instead (although that floor sometimes looks pretty good!) and, true to her name, gets to work! 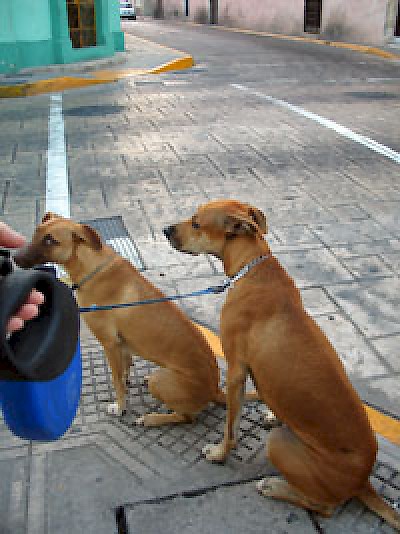 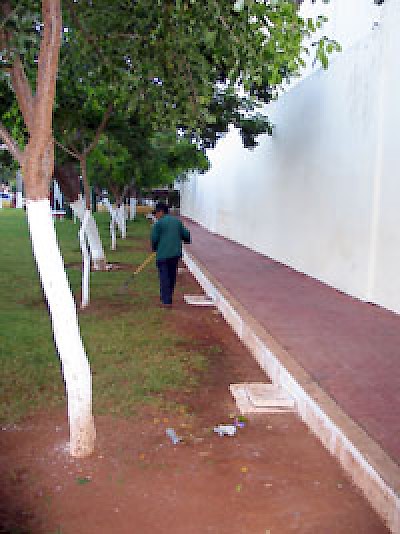 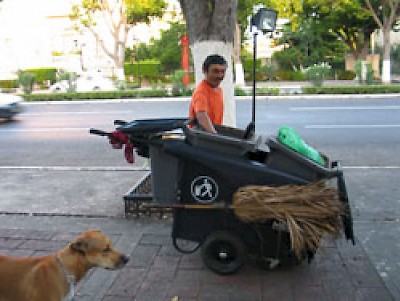 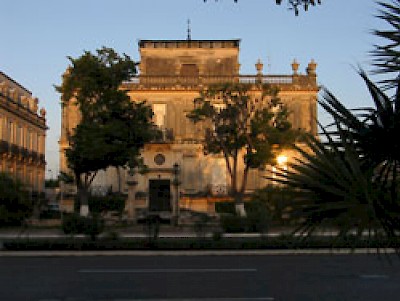 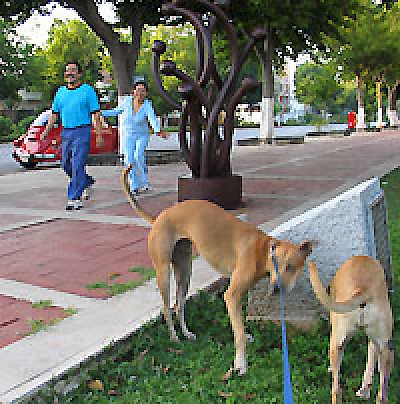 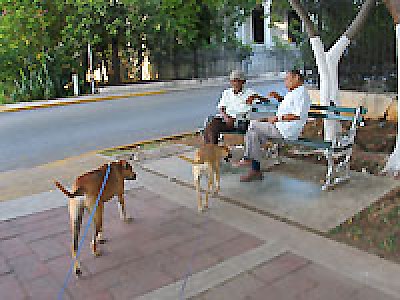 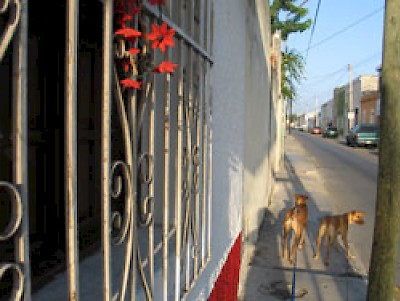