First, the locusts arrived (can you see them in the photo?). We've been hearing about them and reading about them in the paper. Today they arrived en masse in the Centro Historico. They seemed to be circling the Santa Ana area in amazing numbers. They don't hurt humans and they were flying more than landing. Everyone, from albaniles on the rooftops to grandmothers in the calles stopped to watch this most unusual force of nature. It turns out some did come to earth, however. Our former neighbors reported the disappearance of a rather large heliconia plant due to the hungry langostas.

The second thing that arrived today was the new sculpture exhibit on Paseo Montejo. This marks the sixth such exhibit that the Museum of Contemporary Art of Yucatan (MACAY) has supervised, according to their website. Exhibits are removed each year before Carnaval and then a new exhibit is installed before Semana Santa. We remember at least three different exhibits over the years, including sculptures from other parts of Mexico and from countries around the world. For the current exhibit, featured works from Japan will grace the wide walkways of Paseo Montejo for the next ten months.

This new exhibit looks interesting already, as you can see by the photo. We think the sculpture exhibit gets better every time, so we're looking forward to walking the dogs one day soon and taking in all that new public art. Also according to their website, MACAY is planning a permanent outdoor sculpture park for an area near the ruins at Dzibilchaltun, which points to the success and appreciation of public art here in Merida.

Lastly, The new Yucatan Living bookmarks arrived from the printer today. They look great, if we do say so ourselves. The marcadores (bookmarks) have a list of the most important emergency phone numbers that a person might need while living in Merida. The numbers include hospitals, ambulances, 24-hour veteranarians and more. They will be available for free at the Merida English Library Chili Cookoff and Bazaar this Sunday. After that, they will be at the Merida English Library for anyone who wants one. Pick one up the next time you're there and keep it handy. They're sturdy enough to really use as a bookmark and attractive enough to adorn your refrigerator. We hope you'll find your marcador a useful reference and a handy reminder of the Yucatan Living website. 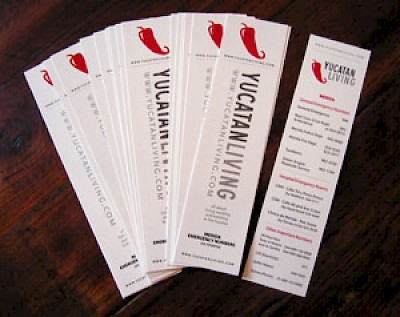