Last weekend, we wrangled an invitation to film a Mayan pig farm on the same day that Mexico played its decisive game in the World Cup. As we set off to Oxtapacab, a Mayan pueblito just north of Tecoh and west of Acanceh, we wondered if we would be able to get our footage of the new pig farm and get back to Merida in time to watch the game.

As it turns out, we needn't have worried.

We reached Oxtapacab (pronounced OSH-tah-pah-COB) at a few minutes after high noon. As we slowly entered town, we saw a group of six or seven men carrying bundles of long, homemade bottle rockets and setting them off as they walked slowly down the road. The sound effects went something like this: Wooooooooshhhhhhh...BANG! Woooooooooooosshhhhh.....BANG! and up in the sky, we could spot tiny clouds of smoke. We had been told this was a fiesta day honoring San Juan Bautista and there was to be a gremio (saints day procession), so we looked farther down the road, and sure enough! The entire town (it seemed) was walking slowly towards us. It was a multi-colored parade, dominated by three carved wooden statues of saints and a monton (a lot) of flowers. Before we knew it, we were surrounded by the slowly walking crowd, a band of musicians accompanying them with horn and drum, and the copal smoke wafting from the incense burner in front of the santos (saints).

Gremios are one of those things you just don't see in the United States... a gift that the indigenous peoples of Mexico bring to everyday life here. The people of faith that belong to a certain church have one day a year when they take the saint or saints of the church out for a walk and a little air. They dress up the statue, carry flowers and burn incense and they sing while they slowly walk the saint around the village. They also set off fireworks to clear the area of any demonios. Sometimes the saint spends the night at someone's house. When they finally return to the church, the saint is put back in place, the flowers and incense are placed all around the statue, songs are sung and prayers prayed. And then they party. (Most likely there are other parts to this process which we don't know about, so if there is more to a gremio, we invite our more Yucatan-savvy readers to chime in with what they know!)

This particular day in this particular town was a most perfect Yucatecan day, and the whole affair created a tableaux worthy of an oil painting. The flamboyanes (flame trees) were burning brightly, contrasting with the clouds in color but mimicking them in shape. The old women of the village walked as they had probably walked for decades down these dusty lanes, carrying flowers as fresh and bright as they themselves had once been, but as their grandchildren beside them were today. People of both sexes and all ages participated in the gremio, but it was the older women and the middle-aged men (their sons?) who seemed the most devout. The heat of the sun was punishing, but the people carried the heavy statues, sang and walked in rhythm to the horn-and-drum music without faltering, in devotion and reverence that was solemn but far from silent. Children played, men set off bottle rockets, women chanted and sang while the gringos took pictures. Que tipico!

After walking about two miles around the village, the people of the gremio finally returned to the San Juan Bautista Catholic church to put their saint back in his place as a white-haired man enthusiastically rang the bell over and over again. Outside the church, the last of the rockets were being set off in quick succession in the field in front of the Hacienda that casts its shadow over the pueblo. There were ice-cream and taco vendors, serving as fast as they could. The music continued, people visited and the party was in full swing as we walked back to the house of the May family, who had invited us to spend the afternoon.

Our regular readers will remember Soco, who is going to beauty school. This is Soco's home, where she lives in three different concrete block houses with her mother (Brigida) and father (Bernabe), her uncle Antionio, her sisters Conchi and Marie, her younger brother Lupe, Conchi's husband and their son, Miguelito. A gaggle of turkeys and about five dogs live outside. Visiting that day was also Bernabe Jr. with his wife and two children. Brigida and her son Lupe had been cooking all morning long, and when we arrived we were treated to a cold Coke, fresh handmade tortillas and a soup bowl full of very delicious homemade pavo en relleno negro. Our regular readers may remember a little pot we took a picture of a whle ago... well, here's what was in the pot!

After a delicious lunch, we piled into our car with Brigida, Bernabe Sr. and Miguelito and drove a mile to the family's newest addition, a pig farm! A collective of nine women from the village had obtained a grant from the government for construction materials, a plot of land and 30 pigs (20 babies, 8 females and 2 sementals (macho male pigs). Bernabe and Brigida's brother had headed a team of men who had cleared the land and built the cement brick building that now houses the pigs. And now they were managing the little farm, which included feeding and washing the pigs twice a day. We were lucky enough to be there, with cameras, for one of the feedings.

We haven't spent a lot of time around pigs (live ones, anyway) and we are here to tell you that you get used to the smell very quickly. Probably this has to do with the fact that these pigs are very clean, considering they get showers twice a day. What is harder to get used to is how much like dogs they seem: smart, playful, mischievous. After awhile, Working Gringa didn't want to think about these little pigs anymore. After all, they are being fattened up to sell in September. Working Gringo, however, is anticipating tocino...

Later, we moved on to another part of the field, where the men explained that they were setting up to make carbon, or charcoal. We were amazed to see a structure worthy of Andy Goldsworthy: A perfectly shaped and painstakingly constructed cone sitting in the middle of the clearing waiting to be covered with chicun (red-colored) dirt and set on fire. According to the Mays, it will burn for 72 hours, smoking like a volcano, and then they will disassemble it, let it cool and then sell it as charcoal. It took them about three weeks to clear the land and cut down the trees they used to build the structure.. It will take another week to burn it, chop it and bag it. Then they will take it to market, earning about 2500 pesos (less than $250 US) for their troubles.

We returned from the pig farm, sobered by the hard work these people engage in daily. Back at their house, we realized that they are supporting eight adults and one child on the money they make from their carbon, the corn they raise in their milpa (field), Conchi's husband's pay as an albañil and Mari's pay working in the maquilladora in nearby Tecoh (she makes $450 pesos (about $40 US) a week for six days of work). The pig farm is new and will hopefully add to their income but it's going to be three months before they see any profit, and in the meantime, those pigs eat a lot.

But no one was thinking about these things at the May household. It was a beautiful Saturday, the pavo en relleno negro was plentiful and the Mexican futbol team was playing Argentina in the Copa Mundial. The television was set up next to the family altar. The altar not only houses the family's pictures of saints and ancestors, but also serves as a place to store their clean pots, medicines and is a place to give thanks. Before the food is served, some of it is placed on the altar. And when we gifted their mama dog with four cans of dog food to help her with nursing her puppies, we were amused to see that the dog food ended up on the altar as well. The altar also serves as a place for Miguelito (3 years old) to hide under when playing hide-and-seek with his friends.

Only las jovenes (the young people) were interested in watching the soccer game. And the gringos, por supuesto (of course). We sat facing the two altars, one honoring saints and one honoring... what? Nationalism? International fame? The strength and beauty of youth? Money? Globalization? Aaaah, too much to think about... much easier to enjoy the Saturday afternoon with fellow fans of the Mexican soccer team, feel the afternoon breezes pick up and blow through the open doors and windows and listen to the grown-ups speaking Mayan in the outdoor kitchen. Much easier to drink beer and snack on guayas, those little green fruits that grow in profusion here and taste like SweetTarts, peeled and mixed in a bowl with salt and habanero chile (yum! ouch! yum! ouch!). Much more fun to cheer and sigh as Mexico played well (si! si!!) but lost (oooohhhh... que triste!).

And when it was all over, we Americans were amazed and humbled by the way Mexico celebrated how well their team had played and by how they partied and enjoyed their weekend, happy that they had done well in the World Cup, not focusing on a missed goal, but on the quality of their players.

What a wonderful country. 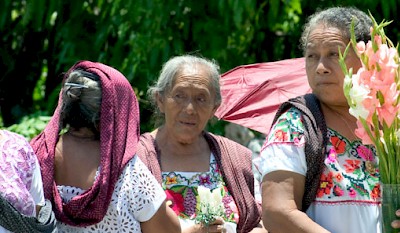 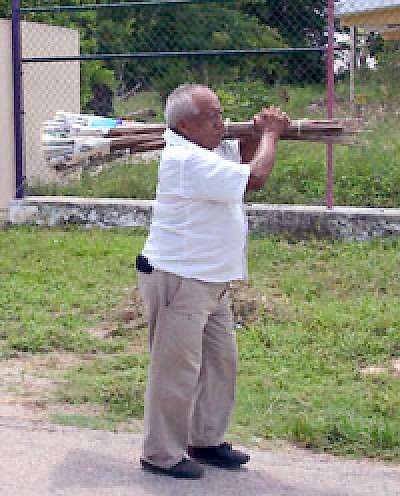 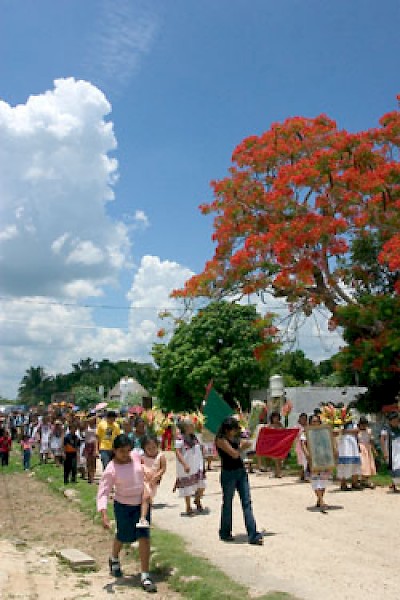 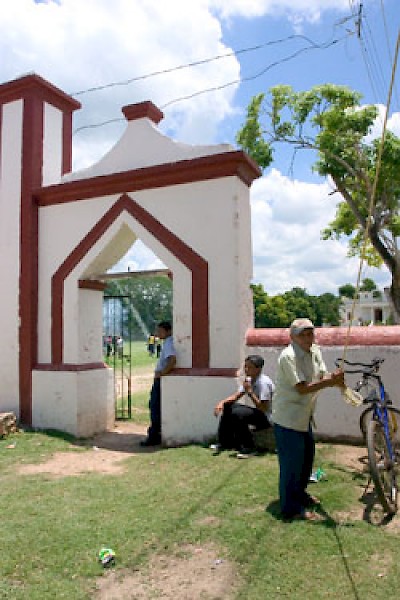 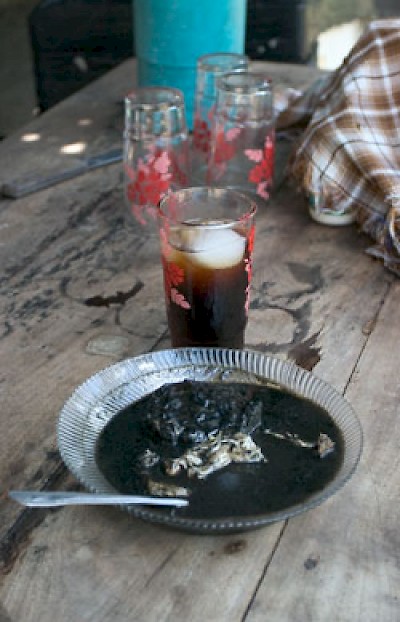 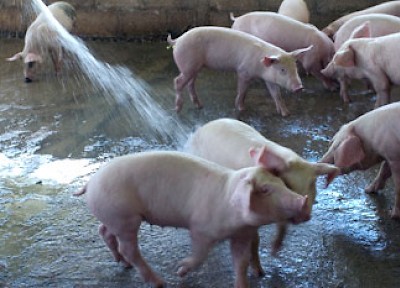 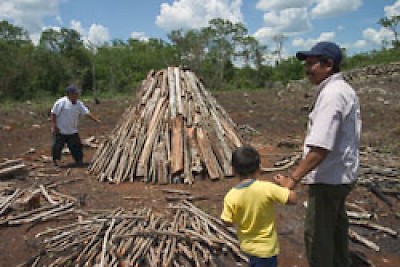 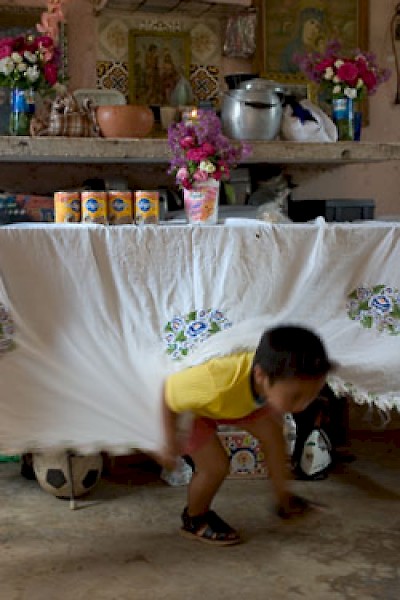 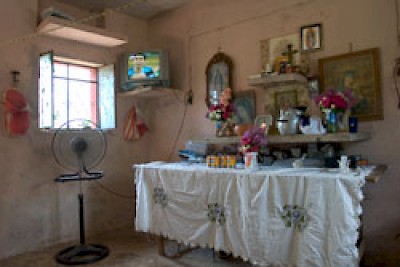