Friday was Subcomandante Marcos' last day and night in Merida, and he covered a lot of ground. He announced late Thursday evening that he was not going to go through another day of meetings, having spent two days listening to various groups and individuals, both "adherents" and "sympathizers" in Chablekal. He was instead going to honor a promise that he had made months ago to visit Chichen Itza in support of the indigenous Mayans there. His updated schedule was released at 2 AM on Friday morning, which of course left those of us trying to cover the event scrambling to change our plans.

We hopped in our car early Friday and made it out to Piste, the pueblo tourists must pass through to reach the archaeological zone of Chichen Itza, with time to spare. That gave us a couple hours to really investigate Piste and see first-hand that while Chichen Itza has become an increasingly popular destination for tourists, the residents have not benefitted. Most tourists come to Chichen Itza by bus from Merida and Cancun. The drive takes them through the center of Piste on a well-paved street, lined with small hotels, restaurants and shops selling locally made handicrafts, like hammocks, masks and other traditional Mayan crafts. But just a block off this well-traveled road are dusty, unpaved streets and some of the worse housing conditions we've seen in Yucatan. We saw traditional Mayan huts leaning sideways with holes in their thatched roofs, many lacking electricity, running water and flush toilets. Compared to many traditional Mayan pueblos throughout Yucatan, the residents of Piste seem down on their luck.

But how can this be? Millions of dollars must be exchanged each year for tickets to see Chichen Itza, the wonder of the ancient Mayan world. All the hotel and restaurant workers, grounds-keepers, tour guides and artisans who service the travelers to Chichen Itza live in Piste.

Where at least are their new schools and soccer fields? A community center? A new medical clinic? We didn't see anything like that. Like the Colosio district of Playa del Carmen and the slum areas around the city of Cancun, the Mayans of Chichen Itza are somehow unable to share in the enormous wealth created by the largest economic engine of Yucatan, namely tourism.

To be fair, there is a newly erected cell phone tower, so anyone in Piste who can afford a handset and the rather expensive operating costs now has access to telephone service, but we wonder how they will charge their batteries... Something tells us the motivation for installing cellular service has more to do with the tourists.

The buses that pass through Piste seldom stop, (only the independent tourists who drive their own cars tend to do that), so the real "point of sale" for the local artisans is at the entrance to the park. In the past, anyone from Piste could sell their handicrafts at Chichen Itza, but this annoyed the tourists so the government built a dozen permanent stalls at the entrance and now decides (who knows how) which artisans can use them. The local artisans who didn't make it into the official artesans marketplace have resisted this control and set up their stands inside the park to sell their wares. Now the government is trying to kick them out. As descendants of generations who have grown up in the shadow of El Castillo and the other landmarks of Chichen Itza, (and lets face it, they are the descendants of the people who *built* them in the first place), they are understandably resentful. They feel they should be allowed to benefit from the popularity of the mysterious structures in their own backyard.

Marcos decided to visit the situation to see it for himself, and to communicate his support, as always, for "the simple and humble people who struggle". Of all the places that we have personally witnessed his visits (Chetumal, Playa del Carmen, Cancun, Merida and Chichen Itza), we would say this visit was the most anticipated and the most appreciated. The excited crowd gathering at the back gate of Chichen Itza for his arrival was 90 percent Mayan and 10 percent press. There were Mayans of all ages, including a good number of older women in traditional huipiles and men who looked like they had been working in the sun all their lives. There were a few handmade banners voicing support for Marcos and their determination to fight for what they feel is rightfully theirs. (This sign reads: "our land, don't steal it, don't keep insisting, you will not win" and refers to a land dispute near Merida where a major development project is pending, called Metropolisur.)

Marcos arrived in his usual caravan and was ushered to a table set up for him in front of the pyramid. For once, he was positioned well for photography, and so we predict there will be many striking photos of him in front of El Castillo circulating in the media for years to come. With more than 300 (?) Mayans gathered around him, he was greeted in Spanish and Mayan. He gave a short speech, which was translated into Mayan, as many of those gathered speak Mayan as their first language. His speech underlined his support for their struggle, encouraged them to continue fighting and assured them that they were not alone. He mentioned that indigenous people in similar circumstances around the country share their struggle and that whatever happened to them would be reported by the alternative press and would be heard around the world. He assured them that they would not be forgotten. We were pleased to see that some of the American and European tourists in the park that day actually stopped to listen, though few understood Spanish or Mayan. We explained a bit about what was happening to a group of American teenagers and a few Dutch travelers. But many of the tourists blithely continued their touring, not realizing that they were missing a chance to witness an historical event.

And then, in a trail of dust and grateful Mayans, Marcos was gone. Back into his van and back to Merida to attend a public rally in the main plaza (more about that in an upcoming post).

And it made us wonder: those American teenagers will return home and gladly pay seven bucks for a Big Mac, fries and a coke. Those Dutch tourists will probably find themselves in Paris or Venice later this year paying more than seven euros for a cappuchino. But people are annoyed when a Mayan artisan asks 50 pesos (less than five dollars) for a handicraft that took several hours to make and represents the traditions of the largest surviving indigenous people in the Americas.

Tourists here often complain if the room in a lovingly restored, colonial bed and breakfast costs more than a Motel 6 in the States. They'll "forget" to tip the Yucateco house maid or waiter. It seems to us that despite the white sand and aquamarine water of these world-class beaches, the mysterious cenotes, the majestic archaeology, tropical climate and the generous and welcoming spirit of the Yucateco people, the tourists of the world expect Mexico and the Yucatan to be a cheap date and are willing to turn a blind eye to the consequences.

As our children used to say when they were teenagers: what's up with that?

For more information, see www.narconews.com and the EZLN Website 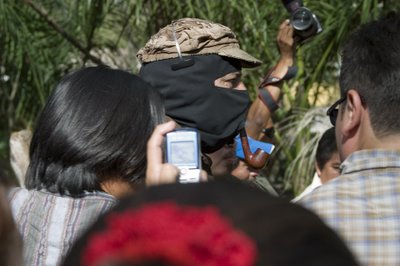 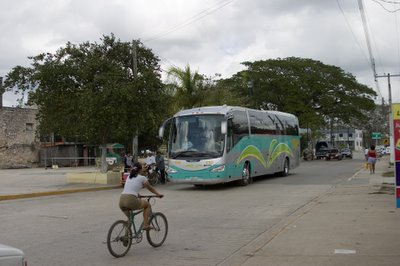 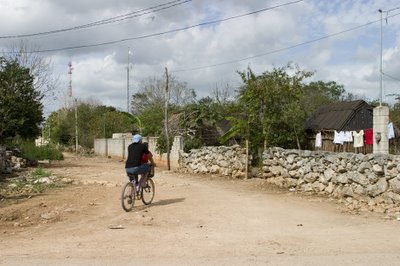 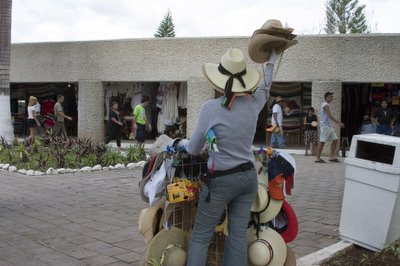 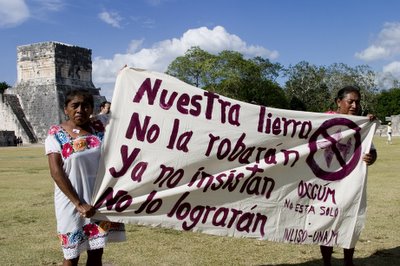 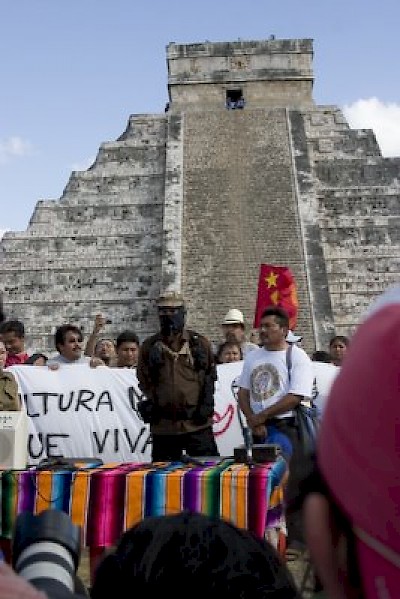