We think somehow it is our duty to mention that today the three most powerful men in North America visited Yucatan's most important tourist attraction: the ancient Mayan city of Chichen Itza. If you want the full story, you can Google it and maybe find the Associated Press article from which we "borrowed" the photo shown here. Take a close look at the photo and you will notice something that no tourist has probably ever seen. There is absolutely nobody else near the El Castillo pyramid. In fact, there were no other tourists allowed in the entire park. Over seven million people visit Chichen Itza every year. It is the North American equivalent of the Roman Coliseum or the Chinese Great Wall. Yet, this morning, only three people and a tightly-controlled group of security and press were allowed inside. Hence, we have no photo of our own to show you and no story to tell. We understand that Mexico's President Fox was promoting tourism. It probably wasn't easy to get President Bush, who doesn't enjoy traveling or sight-seeing, to take a two hour detour for a photo opportunity. But what kind of marketing message is it, if the place looks deserted?

Having said all that, there was one glorious day, June 13th, 2002, when we were driving back from the Caribbean to Merida with our visiting children, when a tremendous thunder storm came sweeping down the highway, with rain flooding the road so heavily that we had to pull off. This just happened to occur at the exit to Chichen Itza and since the kids wanted to see it, we drove slowly down through the pueblo of Piste and up to the park, just at closing time. We explained to the ticket-takers that we would be happy to pay full fare if only they would let us into the park for 15 minutes, and they agreed.

And that is how we, too, were lucky enough to have the entire ancient Mayan city of Chichen Itza to ourselves and how we took this photo: 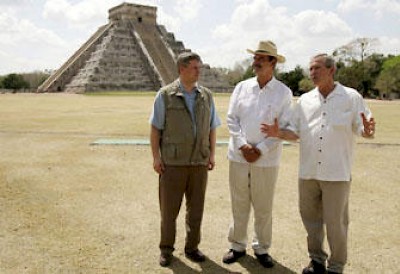 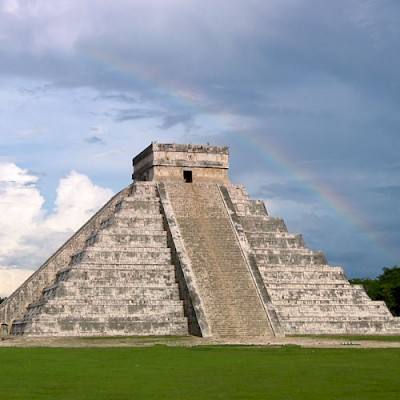