Last Sunday I went out to our ranchito in Hoctun to work and listen to the first game of the second round of the southern division finals of the Mexican Baseball League. We were once again playing Los Diablos de Mexico. Just as last year when Los Leones won the Mexican League Championship we faced Los Tigres and Los Diablos to reach the finals. Well, Los Tigres are history so there we were in Mexico City.

Oscar Rivera, our ace, was pitching for us and Oswaldo Lara for them. Los Diablos had come back from a 3-1 deficit to defeat Las Olemcas de Tabasco to get here and they did it with some high run production. In the first game with us it only took four innings to send Oscar to the showers. We opened the scoring when Oswaldo Morejon, our local boy second baseman, and Quincy Foster got on base. Jessie Castillo's sacrifice fly sent Quincy home.

Los Diablos also scored one in the first off of a sacrifice fly by the designated hitter Roberto Saucedo. We went ahead by one in the top of the third inning but then they just cut loose. Los Diablos scored four back to back homeruns by Saucedo and catcher Saul Soto. In the minds of Yucatecos who I have found love to use nicknames, I could tell one was forming for the portly Saucedo.

In the fourth inning they tacked on three more and the score was 8-2. We made a good showing in the fifth and scored four but they also scored. The inning ended with a score of 9-6. In the seventh we used three pitchers but they still scored three more and then added another insult in the eighth. We lost 13-6. Ouch.

Game Two in Mexico City started slowly but in the third inning we decided to get started. Quincy got on with a hit and Ozzie Morejon hit a homerun. Clearly they were on a roll, because when the top of the inning ended, we had scored seven times. In the fourth inning, they scored one when Saucedo crossed home on a teammate's sacrifice fly. We scored another in the fifth, so the score was now 8-1 at the top of the fifth. In the bottom of the fifth, Los Diablos scored two more and did the same in the sixth. The score was now 8-5!

In the eighth inning, with the help of Said Gutierrez, we scored two more. I was just starting to relax when those devils got two on base with one out and scored a run and loaded the bases. Thank goodness Fornes struck out... or rather, thanks to Jose Vargas our closer.

Then Roberto Saucedo came up, bases still loaded. A grand slam could tie the game and he is a homerun hitter. He hit the ball about 350 feet, fortunately it was 175 feet up and 175 feet down right into our shortstop Vampy's glove. The game ended 10-6 and the series was now tied 1-1.

More importantly, the next three games would be in Merida.

I have found here in Yucatan there is a feeling about Los Diablos that is similar to how many in the major leagues feel about the Yankees: rich team, lots of success, nobody likes them except their own fans. One can be neutral about the team from Oaxaca say but Los Diablos? Hate 'em! Yucateco fans are a boisterous and at times profane bunch who as I mentioned earlier love to use nicknames. By the time Los Diablos arrived in Merida, the fans were loaded for bear. When Saucedo came up to bat in game three, groups began to chant Saucerdo! Of course, cerdo means pig in Spanish.

Our team had Salvador Arrellano pitching now, who had pitched four hitless innings earlier. With the help of Luis Navarro and Jose Vargas, who entered in the seventh and ninth respectively Los Diablos only got one hit in nine innings. A dog ended up adding the additional insult when it ran out on the field while Los Leones were batting. Several Diablos made a half-hearted attempt to help the maintenence crew chase the dog around the outfield and when she finally got a good lead on them she stopped and left a little mounded gift in right field before making her exit by jumping the fence! We usually have about three dogs a year and an occasional cat every season who make their appearances during a game. At the first game I ever went to here there was a possum incident. There are some things about baseball in Mexico that you NEVER see in the States!

By the way, we won that game 1-0 on a hit by our Ozzie Morejon that scored our other local boy Vampy Borges, two home-grown Yucatecos taking the stage.

Game four was ugly, really ugly. The first run was scored in the second by Los Diablos with the help of a wild pitch that moved the runner to third. The first of many that night. In the third they scored on a bases loaded wild pitch to make the score 2-0. We scored two to tie it in the bottom of the third off of hits. In the sixth a wild pitch by our pitcher advanced their runners to second and third and a sacrifice fly scored Eduardo Arredondo putting those devils ahead once again.

Jessie Castillo got on in the bottom of the sixth and then moved to second on a, you guessed it, wild pitch. He scored on a base hit by Sergio Palafox to tie the game again. The seventh, eighth, and top of the ninth saw no scoring so we entered the bottom of the ninth tied 3-3. Said Gutierrez got on base with a hit and was replaced by a pinch runner. Vampy moved him to second on a sacrifice bunt then Ozzie Morejon, who had just won the game the night before, got a hit and sent home the winning run again. We were now up three games to one.

Even ugly games are nice when you win.
Saturday night the rains came and the six o' clock game began at 8:45. The stadium was full and the fans were loud. The drums, horns and chants began looooong before the game. Oscar Rivera and Oswaldo Lara were pitching again. No one scored in the first six innings. The fans chanted pobre diablos (poor devils) and "saucerdo" and the Diablos whined about calls to the delight of the taunting crowd. In the seventh inning Izzy Alcantara, our first baseman, hit one of his streaking long balls into the left centerfield stands and the folks in Progreso perked up their ears 35 kilometers away and said "what was that noise?" Roberto Saucedo struck out twice and popped up to Said behind the plate the third time. Don't you know we cheered about that too.

In the ninth, up by that one and only run scored in the game, Jose Vargas came in to replace Oscar who had to come back out of the dugout and taken a bow to settle the crowd. Jose immediately gave up a hit and the runner moved to second on a sacrifice bunt. This normally results in an out at first but Said chose to throw to second. The runner was safe, two on, no outs. Saucedo and then Ojeda the number four and five hitters for Los Diablos popped up and they were out. We still couldn't breathe. The next batter up hit a sharp ground ball through the infield to Quincy Foster in left field. The man on second was running on contact and rounded third at top speed. Quincy threw a shot directly to Said waiting at home who then tagged out the runner at least three feet before he reached home. Out number three. We won the southern division!

Now that Hurricane Dean has passed us by, our Leones will fly to Monterrey to face Los Sultanes. It will be the same match up as last year's final and last year we won.
This year is lookin' good!

If you want to know the upcoming schedule or more about the players, go to Los Leones website. 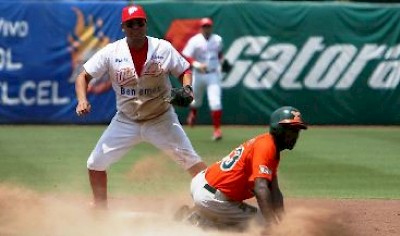 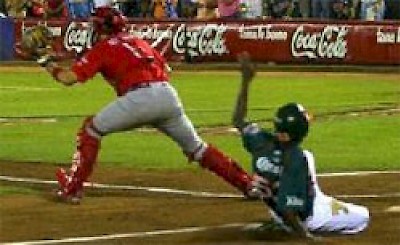 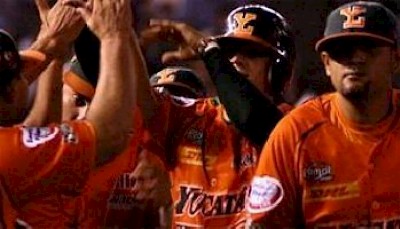