We made it to the playoffs and as always Los Leones de Yucatan are keeping us on our toes. They played a best of seven round against Los Tigres de Cancun. Sorry you missed it!

Pablo Ortega, who, according to statistics, is the best pitcher in the Mexican League, started for Los Tigres. We had Oscar Rivera on the mound and he would have been the best in the league but he was in the States trying out for the big leagues during the first half so he didn't have enough starts to qualify. As one might expect it was a pitching duel. Until the bottom of the sixth the score was tied 0-0. Sergio Contreras hit a two-run homer for Los Tigres and they finally won 3-0. Oscar had a good outing but without run support took the loss.

Ahhhh, but Game Two! Oswaldo Morejon, one of our local boy heroes, hit two homeruns or as they are called here bombazos. Izzy Alcantara and Jesse Castillo hit homeruns too, and we won the game 6-0. Oswaldo Verdugo had a great game on the mound allowing only three hits in seven innings.

These games had been played in Cancun and the next three games would be played in Merida.
Game Four proved to be much more of a match and Los Leones made it exciting. The new governor of Yucatan, Ivonne Ortega, threw out the first pitch and in all the ceremony Fernando Villalobos, our pitcher didn't get enough warm up time. He walked the first two batters, one of which later scored on a base hit by a teammate. Down in the first, always worrisome. Izzy wasn't worried though and he hit a homerun. Then Said Gutierrez did the same. So we went into the second inning, up 2-1. But...Carlos Gastelum from Cancun hit a homerun in the second to tie the score.

A little information about Carlos Gastelum for you. He is the second baseman for Los Tigres. He is fast and he is a good ballplayer. His nickname was Chispa which translates to 'Spark' or 'Sparky'. Well that has all changed! Carlos was one of the ballplayers who tested positive for drugs at the Pan-American games last month. Unlike one of his teammates, he tested negative the second time and was allowed to continue playing. His teammate was suspended and fined. When Carlos came up to bat those pesky, ever-ready to insult Leones fans began a chorus of "dopey, dopey, dopey" . He managed to do pretty well for awhile but I think the taunts finally got to him in later games.

Back to the game. At this point, we were tied 2-2.
In the third we took the lead again with singles from Ozzie Morejon, Willie Romero, and Jesse Castillo, 3-2. In the fourth a big error by Izzy allowed Cancun to score again, but in the bottom of the inning Los Leones surged ahead, third time in four innings, to end the inning 4-3. In the fifth inning Villalobos hit "dopey" and then walked the next batter. Coach Lino Rivera came out onto the field with la grua (the towtruck) and hauled Villalobos away to be replaced by Javier "the shotgun" Martinez. He lived up to his nickname and gunned down the next three on strikes. Things were pretty quiet in the sixth and seventh, which was fortunate for the fans, because we were exhausted watching all this. In the eighth they tied it AGAIN. Then Jose Vargas, our Dominican closer of 90plus-miles-per-hour-fastball fame came in and closed them out, continuing to hold them off in the top of the ninth. At the bottom of the ninth, with the score tied at 4-4, Willie and Jesse both hit for singles. Izzy hit a hard liner to the first baseman who doubled up and Jesse couldn't get back in time. Now the Leones had two outs, Willie was on third and Said came up to bat. He nubbed one into short center field and the diving catch by the Tiger fell short and Willie scored! Our Leones won 5-4 and we left sweaty, exhilerated and worn out, but with smiles all around. It is SUCH hard work being a fan!

Los Leones now had the advantage of two games to one.
Game four was when the groaning began. The first inning saw Los Tigres score three, two of them off of a misjudged fly ball to left fielder Quincy Foster. He probably groaned as loud as we did and came shame-faced to the dugout after the top of the inning ended. In the bottom of the first Ozzie hit a homerun to get us a little closer and feel a little better. Down three to one in the third, Jesse Catillo scored for Los Leones on a contested call. With Jesse on third with one out, Said got hit just above the elbow by a pitch. You could tell he was hurt because he didn't just trot on down to first. The trainer and Coach Lino came out, fussed around down at first for awhile and finally with visible pain on his face Said stayed in the game.

So there he was on first holding his left arm with his right when Vampy hit a ground ball to the second baseman, who reached out to tag Said. Said sidestepped him and went on to second. We sit between first and home, near first and could see that, yes, "dopey" had missed him. Said was called out by the "blind as a ..... bat!" second base umpire. Los Tigres were sitting in their dugout confidently pulling on their batting gloves and high-fiving, when the first base umpire overruled the call on an appeal from Said. Talk about groaning! Coach Reyes of Los Tigres groaned and argued for 20 minutes refusing to let his players take the field to finish the inning. Finally, I guess he received the ultimatum and asked the owner of the team, sitting beside the dugout in the stands, what to do. The answer was obvious as Los Tigres went back out to their positions.

We were now down by one, 3-2. The fifth inning began with a walk for Quincy Morejon, who was hit in the head but uninjured, and hits by Luis "the lightning" Arredondo and Willie Romero and we went ahead 4-3. In the seventh, we upped the ante 5-3. The eighth inning saw Los Tigres tie the game with the help of an error by Alan Arredondo, Luis' little brother.

It also began to rain in the eighth. I think the umpires were hoping (after Los Tigres tied it) that we would come back in the bottom of the inning and win, but the sprinkling continued and got a little harder. Said came up to bat with one out. We had watched him since the third inning, playing with obvious discomfort and now he had to bat. He actually managed to one-arm it into short center and made it to first where he was finally,

mercifully allowed to leave the game. He was replaced by Gregorio Angulo, a little speedster. One batter and one out later, Gregorio was on second and Quincy came up to bat. There were two strikes, no balls and two outs when the wind notched up to about 50mph and the rain became so hard you could hardly see. At that point, the game was suspended, then called.

On Sunday the diehard fans arrived at 1:00 pm to see the last inning and a third. Quincy was up to bat and Gregorio Angulo was at second. Quincy nubbed one out into short center, almost exactly where Said had sent the ball the evening before. Gregorio Angulo scored and we were ahead 6-5. Once again Jose took the hill and pitched to four batters, none of which scored and we won the game. Now we had the advantage of three games to one.

The Sunday evening game was rained out, so it was played on Monday night. Oscar Rivera, our star, and another Oscar, Oscar Bustillos, were on the mound. Coach Reyes had used Pablo Ortega two days before in relief and it was a losing effort, so now it was the Battle of the Oscars. In the fourth inning Jesse got on base, Izzy hit for a double and portly Coach Reyes of Los Tigres called for an intentional walk to Willie Romero. Oscar Bustillos reached back and threw that ball so high and so hard and so inside that it flew over everyone's head and naturally the catcher couldn't catch it and Jesse scored easily from third. He received a standing ovation as he left the field at the end of the inning. In the fifth Los Leones scored two more and in the seventh yet another. We stopped the torture with a total of five runs and left them scoreless. Oscar Rivera left the game after seven and two-thirds innings having allowed one hit and two walks. He, like the other Oscar, received a standing ovation but the difference was that he was smiling and he tipped his cap at us. With the 5-0 win we eliminated Los Tigres and now we are waiting to see who will win the series between Tabasco and Mexico City. We are pitching and hitting well and our boys are dancing, slapping hands high and low. and I am thinking about buying yet another orange shirt. Vamos a ver! 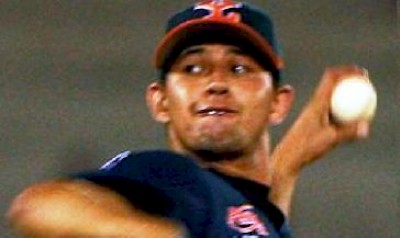 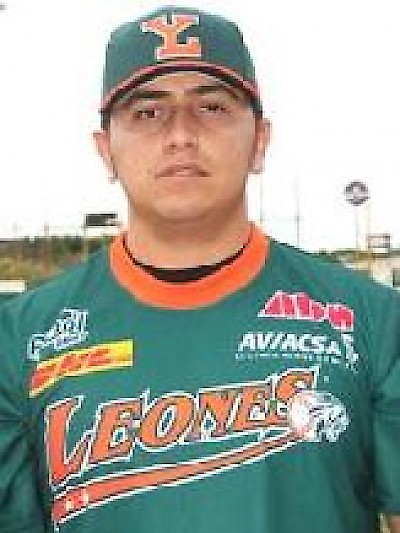 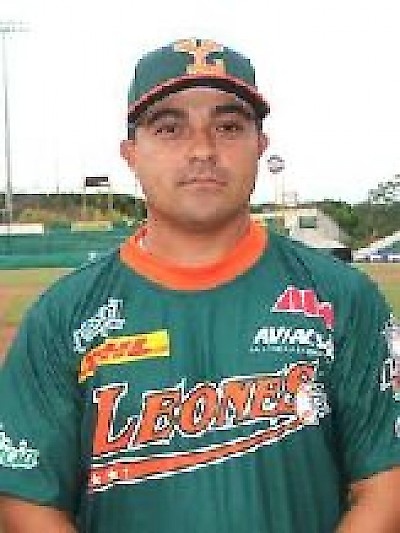 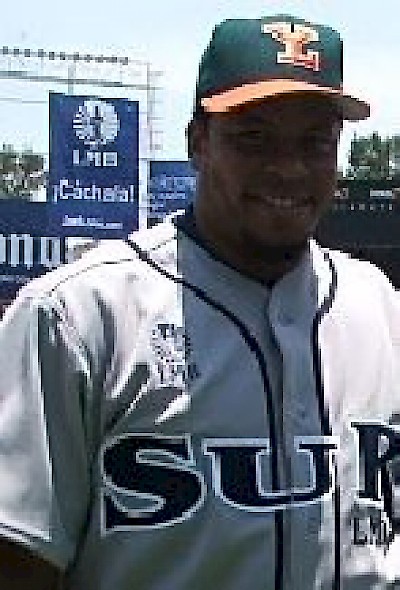 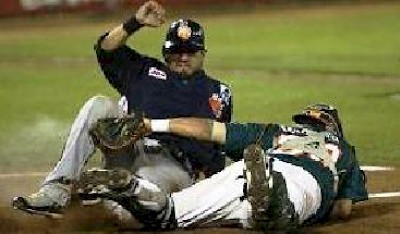 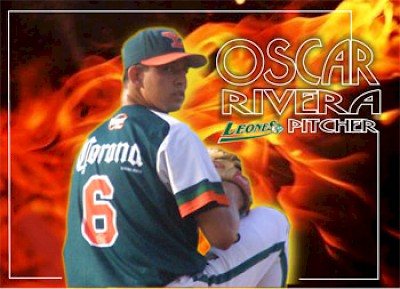