Last week, the Yucatan Living offices were paid a visit by Ernesto Avila Castañeda, one of the most genteel and business-like young men we've met in a long time. He was visiting us in his capacity as Gerente Regional (Regional Manager) of PlanetBowl Entertainment Center, and he was coming to talk to us about a bowling league.

We were intrigued by Ernesto... not just because he was so serious and sincere, but because he really cares about bowling.

Just to give you a little background here, bowling has never been our thing. We remember bowling allies from back in the Mad Men era (late Fifties - early Sixties) when we were intrigued by how the ball got from the back of the building up to the scoretable or where that little blast of fresh air came from for drying your hands. We played briefly as adults years later, but one of us (we won't say who...) kept ending up sitting on the floor with the ball bouncing down the gutter... somehow the game never had an appeal. But being around Ernesto got us kind of excited about it again... because he's really into bowling.

Ernesto, who is from Mexico City, spent a few years of his adult life in Cincinnati. While he was there, he started competing in bowling and started down the path to becoming a professional bowler. In the end, he decided that he couldn't afford the travel and other expenses that it took to compete, but he became a U.S. Bowling Congress certified coach instead. He achieved the Silver Level of coaching (only Gold is higher), and now finds himself back in Mexico, managing PlanetBowl and coaching players from the Yucatan State Bowling Team.

Yes, Yucatan has a bowling team.

Not only that, but two of their team members are on the Mexico National Bowling Team, and they and Ernesto are active in the worldwide movement to get bowling accepted as an Olympic sport. In the meantime, there is a World Tenpin Bowling Championship (every four years... just like the World Cup!) and the last time it was played, Mexico finished second, beaten by (who else?) the United States.

The place to bowl in Merida is PlanetBowl... and if you haven't been there, you really ought to visit. This is not our parent's bowling alley, which was a nondescript building on the outskirts of town, accompanied by an equally nondescript coffee shop (which did, we must admit, serve the most delicious apple pie...). No, PlanetBowl is for bowling in the 21st Century. It is a two-story behemoth building that features 32 lanes (16 on each floor), a coffee shop/restaurant, a video arcade for the kids who don't want to bowl, a pro shop, lockers and restrooms. The pro shop provides balls and shoes to buy, as well as repair services and ball maintenance. There is also a billiards room and a bar. Oh, and plenty of parking. The whole building is air-conditioned (reason enough to go there on some days, right?) and there is no smoking in the building. And if your skills are a little rusty, there is bowling school every Saturday morning at 10 AM.

But that isn't why Ernesto came to talk to us. He assumed we already knew about PlanetBowl. He was here because he wants to start an extranjero bowling league (Ernesto is too polite to use the term gringo). PlanetBowl has 7 leagues right now, all with Spanish-speaking members. There's a Rookies League, a Medium Level league, etc. There are teams with names like La Pistolas, Power Girls, No Mercy and Pollitos (Little Chickens?). Ernesto thought that perhaps those of us who don't speak Spanish so well might like to start our own league, and then start playing the Spanish-speaking leagues... and we could all improve our language skills (not to mention our bowling scores)!

So Ernesto proposes this... that those of us who are interested pick a Saturday and meet at PlanetBowl at noon. For the cost of a shoe rental, he invites as many of us who want to to come bowl for an hour for free, and then talk with him afterwards about setting up a bowling league, choosing a night of the week to play, etc. He will serve refreshments for the meeting. The usual game, once you are bowling in a league, is $120-130 pesos per person for league night (shoes are free then, or you can bring your own, of course), which includes 3 games and requires at least four teams.

Tell Ernesto you want to be in the Gringo Bowling League. Tell him you heard about him on YucatanLiving.com. And then work with him to come up with a date for your first Saturday. Before you know it, you'll be bowling! Voilá! GringoBowl!!

Read a little more about PlanetBowl in our article about Merida Nightlife. 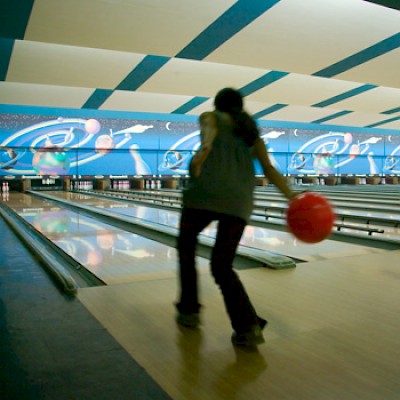 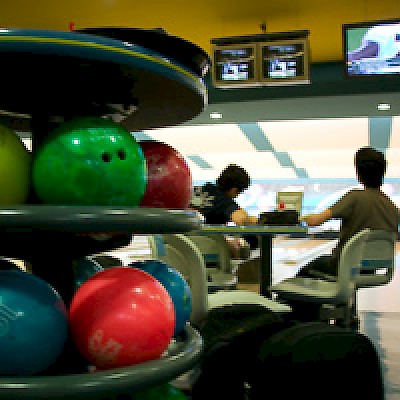 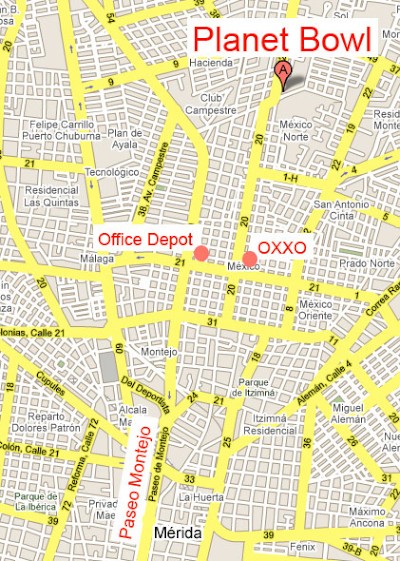