So, it had rained yesterday afternoon. At the start of the game the sun was setting into a mist of thin clouds; then the sky turned loose with pinks, reds, grays all floating below a deep blue evening sky. It was a great way to start a baseball game.

On the evening continued, uneventfully into the 9th inning, tied 3-3. Los Leones are working hard to stay in the running for the playoffs and it looks pretty good right now. We're in first place for the second half of the season and third place for the entire season.

Jose Vargas came in to shut them down with his 90+mph fastball and did... but we didn't score a run either. The tenth was pretty much the same, and so was the eleventh. By the end of the eleventh my kidneys said, 'Julia, I don't care...............go!'. So I ran to the bathroom but got waylaid. I had moved from my spot after the eighth to sit and visit with some friends. Juan stopped me on my hasty retreat and told me to go sit in my seat so we could get this game over with. I came back, sat down in MY seat.

Minatitlan went down in order to our new pitcher Ignacio "The Python" Flores and then we got two runners on base. It was such a lovely, cool evening turning into morning after a long, muggy July day. Breezy, such a lovely res...........oh yeah, two men on. Did I mention, two out and Izzy Alcantara up to bat with two strikes on him? Well, he sent one streaking... you know those liners that never get more than twenty feet off the ground and the outfielder doesn't even move? Why chase something that's gone?

Kukulcan Stadium is the place to be right now and there are only nine games left in the regular season as of the 7th of July. We'll be waiting for you to come join the fun up in Butaca Alta between home and first, second row. It will cost you a whopping $4.50 USD. and we can promise you will have a good time.

Julia Kalmon has written a book entitled Magic, Miracles and Mexican Baseball . The book has been self-published by Julia, a longtime resident of Merida and a avid baseball fan (and is available... just email kalmonjulia@yahoo.com). It is written in English and translated into Spanish. The book chronicles the 2005 season of Yucatan's Leones baseball team , a team that won the national championship in 2006! 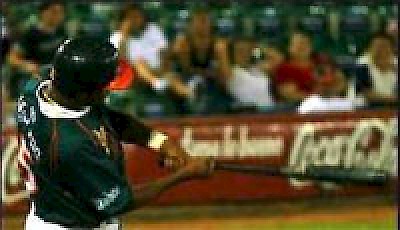