Editor's Note: Since this article was first written, El Corredor de Las Animas has become a very big event in Merida, drawing people from around the world to participate in the Yucatan's unique way of celebrating Día de Los Muertos. Other than the fact that it has become even bigger, busier and more interesting, nothing about it has changed, and we love that about it.

There are times when living in SOME (South Merida) can be tiresome. The voladores (homemade fireworks) go off sometimes for hours on end at decibels too loud to be neighborly, the dogs bark when they should be sleeping, the old men sleep on the sidewalk when they should be walking and life is less familiar and sometimes less comfortable than up in the Gringo Gulches of Santa Ana and Santiago, let alone the modern North.

But when the traditional holidays come around, they are celebrated in our neighborhood with a participation and verve that you just don't see as much in the northern neighborhoods. And because we are vecinos, we get to enjoy and participate in them in ways we might not otherwise have the time or energy to.

Last Friday was the first night of the weekend of Los Días de Los Muertos, or Hanal Pixan as the Mayans call it. The city of Merida had been promoting the Friday night city-sponsored event called El Corredor de Las Animas (The Corridor of the Souls) for weeks down here, passing out fliers to encourage as much participation as possible. The idea was that Calle 66 would be shut down to car traffic on Friday afternoon so that all the vecinos (neighbors) could put altars to their dead loved ones in front of their homes. This would not only bring the city and the citizens together in celebration, but would also continue to build a tourist attraction for the city of Merida.

You see, the citizens of Merida have to be encouraged in this because Day of the Dead in the Yucatan has traditionally been a private affair. Homes are swept and cleaned in anticipation of a visit from the dead ancestors' souls, who are rumored to come out of their graves on these nights to visit their old haunts. Tradition has it that if you don't present them with a clean house, they will feel obliged to stick around and help you clean it up. Only the Goth teenagers want that, of course, so houses in the Yucatan are spic and span when the first night of Hanal Pixan rolls around. And altars are set up in the house, piled high with the ancestors' favorite foods, candles, incense, liquor, flowers and photographs. The family sits around and eventually eats and drinks and a good time is had by all. In the last four years, the city has been encouraging its citizens to take it to the street. There is the Friday night event at L'Ermita and the Saturday daytime event in the Plaza Grande, the center of Merida.

The food on the altars for Hanal Pixan (which in Mayan means Food for the Souls) comes from all over the Yucatecan Cuisine map, but the central focus of culinary delight this weekend, the Mt. Olympus of dishes that towers over them all in its humble splendor, is the mucbil pollo, commonly called simply the pib (or pibe). All over town, women and their daughters and mothers and grandmothers have been baking or preparing to bake pibs this weekend. Chickens that have been raised all summer have been slaughtered, masa has been prepared, and plans were made for cooking sessions. When you see handlettered signs springing up around town offering Ricissima Pibs! and Se Vende Pibs, you know that Day of the Dead is imminent.

So, this last Friday afternoon, the Working Gringos emerged from their office cave to walk two blocks to the main event... a rare treat to have an event so wonderful happening so close. Calle 66 was indeed closed off to car and bus traffic in all but a few spots. This alone was cause for celebration in our book, but there was so much more. Many of our neighbors had indeed dragged their altars out to the sidewalk in front of their homes, and there were others that had come from colonias in different parts of the city to set up Day of the Dead shop. The street was lined with candles, white table-clothed tables, crosses, flowers, photos, food of all kinds and men, women and children visiting, laughing, sitting, playing, talking and watching. The church, L'Ermita was lit up, with children playing at her feet and casting ghostly shadows on the facade. Above the church, the rabbit in the moon looked down on it all and wiggled his nose.

We walked awhile down the street, cameras in hand. The strolling crowd seemed to be mostly locals, with a few lucky extranjeros who had managed to find their way down to this urban outpost from the tourist center of town. We stopped and chatted with some of the altar owners. One woman sat proudly beside her table which had a photo, it turned out, of her son in the middle, surrounded by a modest offering. A tall and handsome teenager walked up to join her, and he looked just like the man in the photo. This was her grandson, and when we pointed that out, they laughed goodnaturedly, enjoying our observation.

Where was the sadness? the darkness and grief that comes hand in hand with Death? We continued.

Up by the church, the park was filled with people. A stage was being set up for a free concert to be held in a few hours. And everywhere else there were tables, tables and more tables of white, covered in food, flowers and Mayan ephemera, presided upon by a sea of women in huipiles. There were more huipiles in that one park than we've seen together in awhile. Generations of women sat together, dressed beautifully, visiting and laughing, or staring quietly, or playing with children. There were a lot of viejas, too... with the traffic stopped and the old ways being celebrated, they felt safe and welcome and they were everywhere.

Of course, there were men there too. Men had built the Mayan huts that housed some elaborate altars. Men had trucked in the palos (sticks), constructed the palapas and built the low stone whitewashed walls around them. Men continued to assemble tables, unstack chairs and fiddle with the lights and sounds. And men would tear it all down the next morning.

We met up with some friends there in the square, and with them, we sampled some of the food on the altars. Is this okay? Isn't it an altar, and supposed to be sacred and untouched? Apparently not. Our friend, Samuel, who is 100% Yucateco, started by sampling the pavo en relleno negro on one table. He raved. The cook beamed. We all tried it. Lots of laughter and compliments were exchanged, photos taken, then on to the next table.

We spent the next hour strolling all the way down Calle 66 to the Panteón Florido, one of the three cemeteries in that area. As we approached, we could see people lining up on both sides of the street in parade-expecting formation. Sure enough, a minute or so later, a parade of white-clad mourners, faces painted like calaveras (skeletons), emerged from the cemetery and marched slowly up the avenue, accompanied by some very eerie Mayan music. At last, a touch of familiar spookiness in all that fun!

We walked home through the back streets of San Sebastian, one of the poorest parts of the Centro. The streets were quieter than usual, the dogs weren't barking and we decided that the souls were at peace with the celebration in their honor.

Saturday night, the streets were full of a different kind of celebration... Halloween. Mexico and the Yucatan has lately taken to Halloween like vampires to sunset, and there were Halloween parties throughout the city. A lot of the young people here only celebrate Halloween; they think it's more fun, more interesting. They like dressing up in costumes. At least in our neighborhood, it seems to be more about the costumes than the candy (we had no trick or treater's), but give them time. We used to have mixed feelings about the Americanization of what we think is an important cultural holiday, but since the Mexican and Yucatecan traditions aren't dying, why not just throw another one into the mix?

Of course, if you're lucky (and we were this year), someone offers to cook you a pib during this holiday. This year, the amazing Beatriz had plans to cook pibs with the mother of her novio (boyfriend) and promised she would bring us one. Sunday afternoon, while we were working (we didn't get this name for nothin', you know!), the door opened and the smiling face of Beatriz appeared, hot pib in hand. After she left, we opened the top of the pot and inhaled the most wonderful aromas of summer chicken, beans, tomatoes and corn, all wrapped in banana leaves. The tender chicken baked in a savory masa with a crunchy top seemed to us like a Mayan chicken pot pie, and it tasted even better than it smelled and looked, we can assure you!

And so, we have lived through another Day of the Dead in Mexico, in the Yucatan. Each year, we grow closer to our own demise. And each year, we do what older people do best... we treasure and help to preserve the old traditions. We participate in them, so the young people around us know that they are worth saving. We write about them. We enjoy them. We promote them even.

And we welcome... no, we embody the continuing synthesis of cultures, the mixing of pumpkins and pibs.

Our first Hanal Pixan in Merida 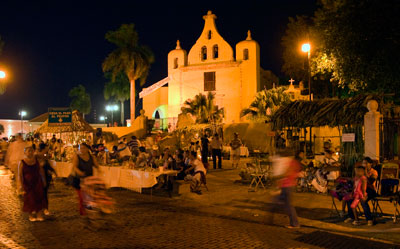 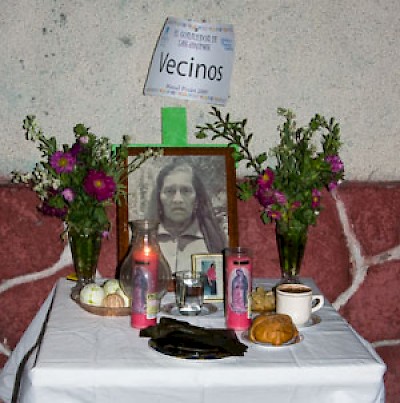 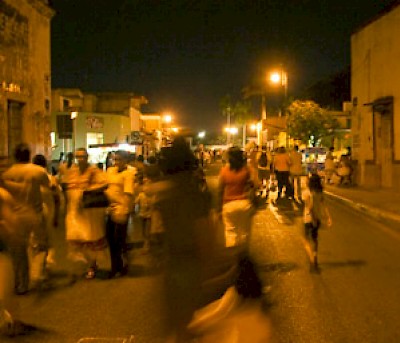 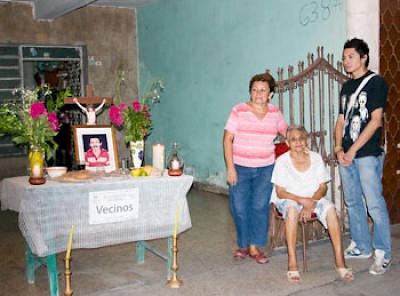 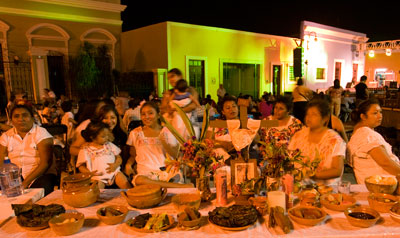 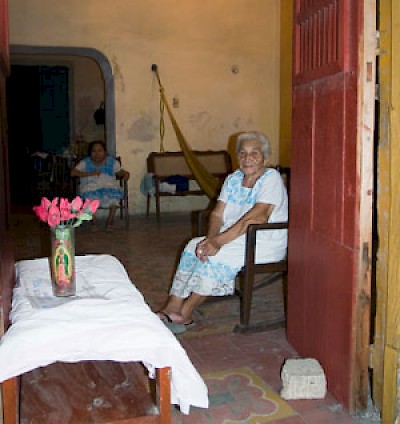 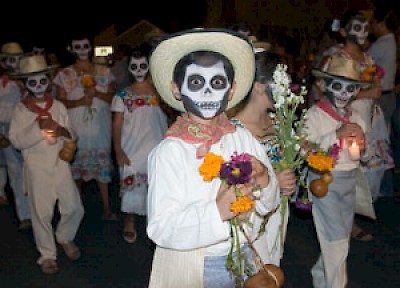 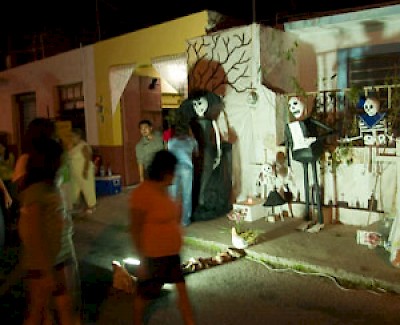 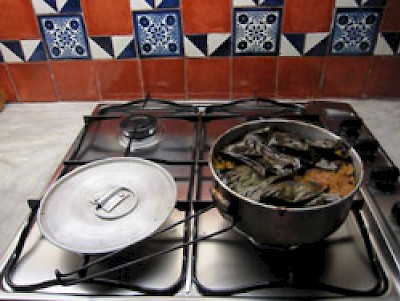 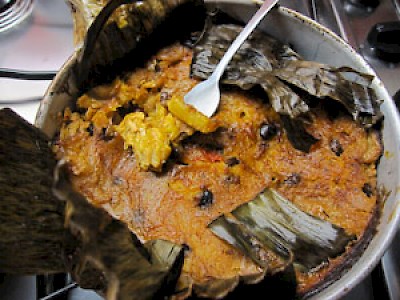