We promised a report on Zapatista leader Subcomandante Marcos' farewell speech in Merida last Friday night. And it has been a week since it happened. Apologies for not following up sooner.

Marcos was originally supposed to speak at the Plaza Grande at 6:00 pm last Friday night. But due to the unplanned visit to Chichen Itza, the speech was postponed until 7:00 pm, and he didn't actually arrive until 8:30 pm. Unfortunately, it seemed that many of the campesinos who had been working hard all day left the plaza before the Zapatista caravan drove up.

In the meantime, the raised circular area around the flagpole in the middle of the Plaza Grande kept getting more and more crowded. After some speeches by local supporters of the EZLN, there was some entertainment to keep the crowd, well... entertained, sort of. The first act was a life-sized puppet show featuring Don Quixote. We couldn't understand what was being said... they were speaking and singing in Spanish, and not very clearly. The sound was turned up way too loud (yes, we're old but we're children of the 60's so we understand loud, even if we don't always like it anymore) and most of the action took place on the ground, where only the first few rows of people could see what was going on.

The next act was a band; we never learned its name. It was three guys: guitar, bass and drums. This group *was* entertaining. They had pretty good voices, the bass rocked and the guitar soared. It was an eclectic mix of rock, cuban, reggae and more. Really, some of the best new rock and roll is coming from Mexico these days.

After them, a folk singer with a guitar played ballads until the caravan pulled up and Marcos emerged only to disappear into a huge huddle of bodies on his way to the stage.

Then, the most incongruous event of the evening happened. A woman, in her late twenties, got up on stage and started chanting into the microphone, "La lucha sigue! Marcos vive, vive!" (The struggle continues! Long live Marcos). It's probably a very moving chant, given a different context. But she was obviously a well-fed, well-bred, expensively attired and coiffed, upper-middle class woman who was shouting about how the human rights struggle continues. Maybe we have some biases to deal with here, but it just didn't work for us... Apparently, it didn't work for anyone else either because she was alone in her chanting and after about twenty repetitions at maximum volume, she had the good grace to give up. Phew!

We thought maybe she had been raised on too many Hollywood movies...

Then Marcos got up on stage. Ah, as my friend would say, what a professional! Marcos had the intelligence to understand that lots of people couldn't see him, so he leapt up on the drummer's stool or something, which put him head and shoulders above the crowd and visible to all. He even stood at the center of the stage... what a concept!

To break the ice, Marcos did something he has never before done in public. He took off his mask. You can see a short clip here: Marcos Unmasked .

Then he spoke. He spoke calmly and engagingly about what he had learned over the past few days outside Merida. About the people he had met. He spoke about the current governor and his attempts to build the new development called Metropolisur which is taking away land from those who wish to live and have lived for generations in that area. He spoke about how the current political parties couldn't be trusted to fulfill their promises. And he spoke about how the indigenous people all over Mexico share the same problems.

Marcos was certainly well received by the crowd, which seemed to have a preponderance of students and young people. There was also a healthy mix of foreigners who appeared to be mostly travelers and tourists. The mood was not angry but upbeat. It seemed to me that the crowd (ourselves included) supported Marcos and his message, listened to what he had to say, but did not always identify personally with the problems he was referring to. The "simple and humble people who struggle" were not well-represented in the Merida crowd that night.

Apparently this had been true most of the time during Marcos' meetings in Merida as well. Merida has been and continues to be a bastion of European culture and capitalism in the Yucatan Peninsula. The Mayans don't call Merida the "White City" for nothing.

For more info about Marcos and "The Other Campaign," visit NarcoNews or the EZLN Website. 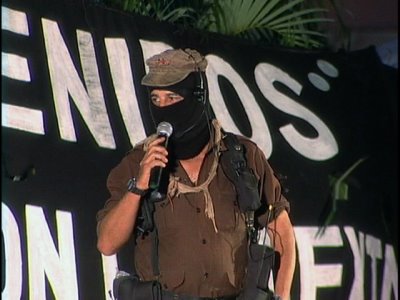