Last night after enjoying a leisurely dinner of panuchos and chuletas de cerdo (pork chops), washed down with tall glasses of agua de sandía and agua de pitaya at Parque Santiago, the Working Gringos and their friends wandered down to the Plaza Grande to see what was happening there. And indeed, there was a lot going on. The main square was lined with trucks from pueblitos around the peninsula, each one being relieved of its burden of rocks, palm fronds and palos (sticks), the raw materials for building the altars and their temporary shelters for Dia de Los Muertos. The men from the pueblos were working well into the night (it was about 11 pm when we stopped by), lashing together the sticks with sisal twine, building lovely palapa roofs from green palm fronds, and setting up altars inside. We were amazed at the differences in the construction methods and the designs of the structures. We joked that one way to find a good construction crew would be to come down to this event and look for the well-constructed hut with a sturdy roof and get the names of the builders. Some looked nice enough to move into, while others looked like they might fall over in the slightest wind. All of them would be gone by the next nightfall.

This morning, on our way to work, the traffic around the zocalo was snarly and congested...much more so than most mornings here. We parked a few blocks away and wandered down to the square with cameras at the ready. The zocalo was a beehive of activity, with both participants and observers milling about and getting in each others' way. While the observers wandered and took photos, the participants were busy putting the finishing touches on their altars. Some altars and huts were humble affairs, while others were elaborately-constructed extravaganzas. Some were erected by departments in the government, others by groups of people from pueblos outside of Merida, towns from Sotuta to Opichen to Progreso and everything in between and beyond. Progreso's altar even included a sandy floor! There seemed to be a lot more of them than there were last year, but true to form, by the time a second team of Yucatan Living photographers headed out there just after lunch, all the participants were beginning to tear down their creations so they could head for home.

A Day of the Dead altar in this part of the world invariably contains some of the following ingredients: candles, flowers, a picture of un fallecido (a fallen one), some sort of food (more on that in a minute...) and various decorations, done to taste. Most altars were sheltered in a temporary hut with walls of widely spaced sticks (to let the breezes in) and palapa roofs (to keep the rain out). The altars were mostly built from sticks and planks. Outside the huts some had set up fires and were making tortillas. Others had created pozos de deseos (wishing wells), and still others had bateas (washboards), gardens or stone walls arranged outside, mimicing the environment in which these altars might be found in a typical Mayan village. We were happy to see that there were a lot of young people participating, dressed in traditional dress and a few even helping with the tortillando (tortilla-making) process!

The atmosphere was festive and live Mayan music blared from the loudspeakers set up around the square. The Mayan music included flutes, drums and caracoles (conch shells). In every hut, food was either set out for the hungry dead or being prepared by the living. Oh, the food. Every delicacy and favorite Yucatecan dish was on display, from pavo en relleno negro to atole, camote, calabazas, pan de muertos (a special bread made for this holiday) and of course, pibs. The breezes blowing around the square smelled delicious!

It was with a big sigh that the Working Gringos headed back to the office to, well... to work! But before we set our collective noses back down next to that grindstone, we decided to share with you these photos and this account of Merida's celebration of Day of the Dead. 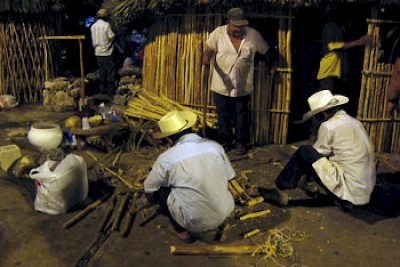 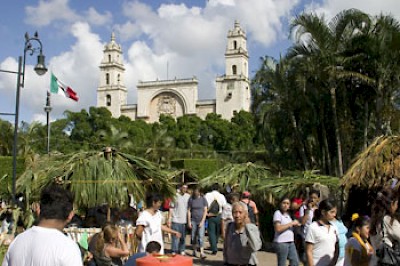 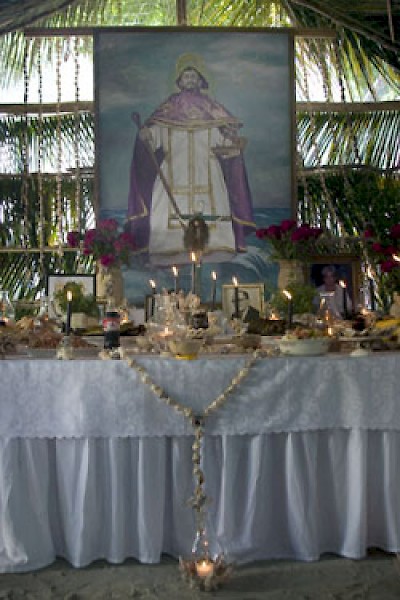 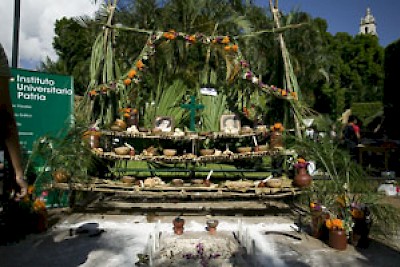 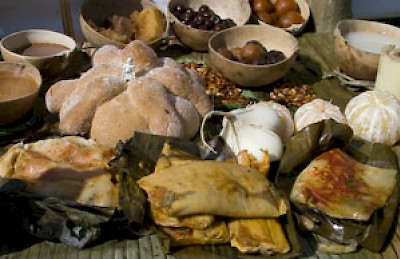