In years past, we’ve written a bit about our experiences on Day of the Dead, complete with photos, to give you an idea of what goes on here in Merida on that special day. This year, we've got a little more background about how Day of the Dead (or Hanal Pixan, as it is called here. Pronounced ha-NAHL peesh-AHN) is unique in the Yucatan from the rest of Mexico, along with some useful information about what will be happening when and where.

The logical place to start thinking about the dead, in Merida or anywhere else, would be in the cemeteries. In many places in Mexico, cemeteries become the place where people gather and commune with their dead during the three days and two nights of celebration collectively known as Dias de Los Muertos. In the old days, the dead were buried in or around the church of their neighborhood. Now, when you walk into the main cathedral in Merida (similar to somewhere like, say, Westminster Abbey), you’ll see names and dates carved into the stones that make up the floor, indicating that there are people buried beneath where you are standing. While this is most obvious in the main cathedral in Merida, the dead were buried around the other churches in the Centro as well, until there were too many dead and new disposal locations had to be found. (Besides seeing tombstones in the main cathedral, you can also see evidence of an old cemetery in the botanical gardens behind the church in L'Ermita.)

It was at that point that cemeteries, or pantheons, were introduced in Merida. Today, Merida has a few central cemeteries. There is the Panteon Florido, opening off of Calle 66 at about Calle 90. It is a small private cemetery which was originally reserved for the wealthy. The mausoleums there are fairly modern and the road through the cemetery has just been repaved, making it a lovely place for a short stroll (it's not that big). The largest cemetery is the Cementerio General, with a small side cemetery, Jardines del Recuerdo (Gardens of Remembrance) both opening out onto Calle 81 roughly near the entrance to Bodega Aurerra near Avenida Itzaes. Cementerio General used to be the ONLY city cemetery, and rich and poor were (and are) buried there side by side. Of course, it’s easy to tell them apart, even after death. The rich families of Merida bought plots closest to the main avenue, and built large and elaborate mausoleums. The poorer families built more modest osorios (bone depositories). Any day after about 6:30 am and before 5 pm, you can stroll through Merida’s general cemetery and see some incredible Gothic and Colonial architecture in amazingly picturesque states of ruin and disrepair, alongside much more modest little houses for the dead, which is what most memorials look like here. Cementerio General is probably Merida’s most fascinating cemetery, and certainly its most photogenic. Merida’s largest cemetery is Cementerio Xoclan, which is also its most modern and which includes buildings available for funerals as well as functionary offices and a crematorium. Colonia Chuburna also has its own cemetery, which used to serve the little town of Chuburna, but it has long ago filled up and there are now no more burials allowed there.

Walking through a cemetery here has impressed upon us just how much more comfortable this culture is with death. Usually, a family only buys one plot and then buries generations of loved ones in the same place. When they run out of room, the old bones are packaged up and moved aside or removed altogether to make room for those of the newly deceased. It is not uncommon to see bones protruding from a pile of dirt or to peer inside the back of a osorio and see a skull or two (see the banner at the top of the page, taken in a local cemetery). And when we have witnessed families at a graveside, painting or planting flowers, it has never seemed like a solemn occasion, but rather one for chatter, laughter and visiting. Cemeteries themselves are built like little villages, with the dead buried in graves built to look like houses, ranging from modest to grand, emphasizing that Death is just a part of or a continuation of Life.

Unlike in other parts of Mexico, Yucatecans do not conduct the large part of their celebration of Dias de Los Muertos in their cemeteries. They will go to the graves of their dearly departed and clean them up, add fresh flowers, and maybe even add a fresh coat of paint. The city sends workers in the weeks leading up the Dias de Los Muertos to clean the common areas, cut down the weeds and do a little facelifting. But it is tradition in this area that during the Days of the Dead, the dead leave their graves and come home to visit. The week or so before Dias de Los Muertos is set aside for cleaning the home from top to bottom. Grandparents tell their grandchildren that if they don’t have a spic and span house, the dead will feel obliged to come in and start cleaning as ghosts, and they wouldn’t want that, now, would they?

By the time October 31 rolls around, Yucatecan homes are cleaned and elaborate altars are set up in the house, with candles and flowers, as well as the favorite food and drink for the dead loved ones. The most famous food of this holiday that is specifically Yucatecan is the pib, which is a hand-shaped pie of masa (cornmeal) with chicken, turkey and/or beans in the masa. Pibs are prepared and cooked (in underground ovens, traditionally) by the women of the family on November 1. Everyone eats a pib during Dias de Los Muertos. The other traditional Mexican food, which you will find in various sizes everywhere from WalMart to the local bakery is the Pan de Muerto (Dead Bread), a loaf of sweet egg bread that melts in your mouth and tastes great with coffee or Coke.

For the last few years, Merida has continued to publicize more Day of the Dead activities so that there is something for the tourists to see during this time. This year again, on October 31 (Friday this year), over 75 different groups will come to the Plaza Grande at 8 am and begin to set up elaborate altars, many of them housed in makeshift houses built on the spot. Municipalities, school groups, government offices and other organizations come from all around Merida to set up their altars, and it is quite a spectacle. Locals and tourists both enjoy exploring the different altars, with examples of every type of local food and flower. The event is a photographer’s paradise. What is truly amazing is that by 7 pm that same night, everything has been taken apart and torn down and the Plaza looks like nothing happened the next morning!

At 7 pm on that same evening, there will be an event called the Delirio Teatral de Hanal Pixan. If our experience is any guide, this refers to a costumed parade that travels between Parque Santa Lucia and the Catedral de San Idelfonso(not a long trip), with participants dressed in ghoulish costumes with faces painted to look like skeletons.

If you have the time, be sure to go to the central market and buy some of the traditional candies and other decorations that are only sold during this time of year. We've never actually eaten the candy skulls, caskets or candied renditions of plates of mole or enchiladas, but they sure do bring color and fun to a Day of the Dead altar (and the ants like them too!).

This year, the city is trying something new, and organizing a group of altars to be set up at the park at L’Ermita, lining Calle 66 all the way down to and inside of the Pantheon Florido. Various groups within the city (from city offices and cultural centers) will be setting up altars, and, according to our sources, there will be music, food, organized activities and performances. This is a new addition to the Hanal Pixan events in Merida so we look forward to seeing it.

If you have been walking or driving around the city in the weeks leading up to this one, you’ve surely seen Halloween decorations springing up in front of houses and in businesses. In the Centro and among less wealthy families, Halloween has been gathering admirers, but there is little to no "trick or treating". Children do dress up in costume one day at school, where they will have a party with piñatas, dancing and treats. The next day the children will dress in traditional Yucatecan costumes (huipiles and guayaberas) and they will celebrate Hanal Pixan at school. They will create and decorate altars, eat tamales and regional sweets such as candied pumpkin, papayas, cocoyol, yucca, etc. and probably have another piñata. Teenagers will go out dancing at discos where the theme will be about Halloween, but no one dresses in costume. Here in the Yucatan, they reserve dressing in costume for Carnaval!

After all that partying and eating and drinking and communing with the dead, November 2 is a holiday, when we can all enjoy a day of peace and quiet. November 2 should find Merida as quiet as a morgue, with all the living residents resting in their clean homes and all their dead relatives returned back to their newly-painted graves.

Other articles of interest:

A bit about Mucbil Pollo...

Also, be sure to see our photos of Day of the Dead in our Photo Gallery 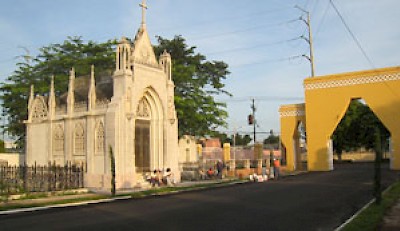 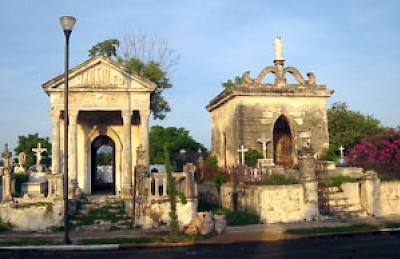 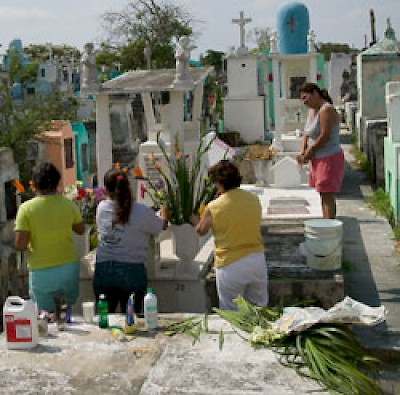 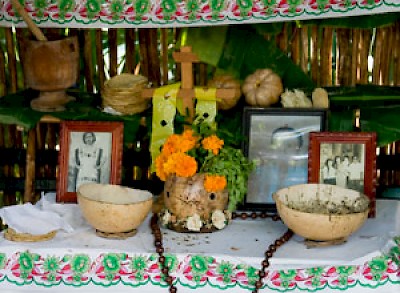 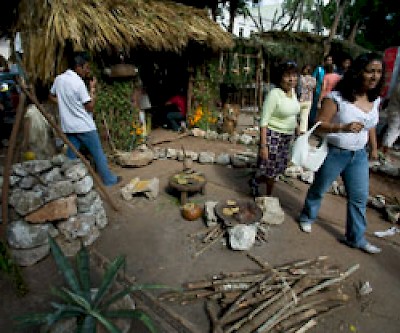 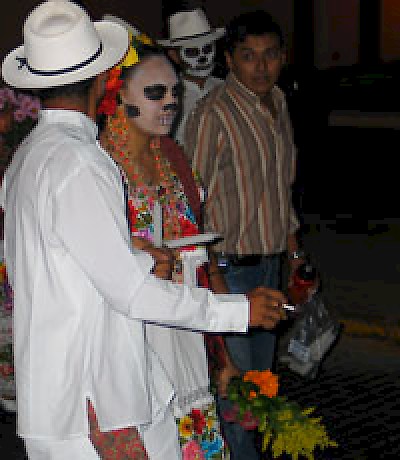 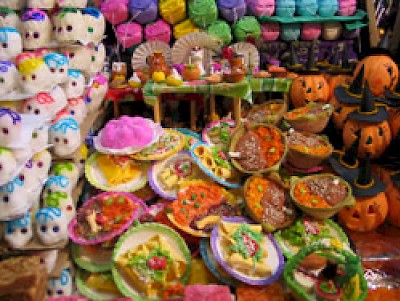