You may remember Soco, whose quinceaños party we attended awhile back in her home town of Oxtapakab, about 40 km south of Merida. Soco is the youngest daughter of Brigida, the Mayan woman with the Irish name who cleans our house every week. (Brigida and Bernabe, her husband who still works in the milpas or corn fields, have 3 daughters and 2 sons, and 1 grandson). Since quitting school after the sixth grade, Soco had been staying home and helping around the house. Her mother told us that she was not interested in continuing her schooling. About six months ago, Soco must have gotten bored or realized she needed money, as she began accompanying Brigida every week, helping to clean both our house and office one day a week, and thus earning some extra money.

A few months ago, when Soco and Brigida were ready to leave, we noticed that Soco was dressed and made up as if she was going somewhere important. We asked what the occasion was and she told us that she had started attending Escuela de Belleza (Beauty School). About a month or so later we asked her about her school progress, and her face fell as she told us that she had stopped attending because her family really couldn't afford it.

After contemplation and discussion over the next few weeks, we offered to pay for Soco's schooling. The cost of $690 pesos (about $65 US) a month for one year with maybe an extra $100 pesos ($9US) per month for supplies costs less for one year than putting our own daughter through college in the States costs in a *month*. Realizing that her prospects without schooling were extremely limited, we decided that this was a way to help Soco create a more hopeful future that would not be limited to cleaning gringos' houses.

We learned that she wanted to attend Tania Beauty School, which faces Parque San Juan south of the Plaza Grande. She had chosen Tania Beauty School because her older sister, Mari, who works in a maquiladora in Tecoh, had told her that all of the best local hairdressers come from this particular school.

The next week, after the morning cleaning was done, we accompanied Soco and her mother down to the school to sign up. The lady at the desk outlined two different options: $400 pesos a month for two years at a slower pace or $690 pesos a month for one year. Agreeing that so many things can change in the course of two years, we agreed on the one-year program.

Soco turned over her birth certificate, some photos of herself and a certificate of completion of primaria (primary school, i.e. first through sixth grade) and the deposit of the first month's tuition. We had gotten lucky and come at a time when the $250 peso sign-up fee was being waived as a promotion. She was given a choice of coming at 9 am, 11 am, 2 pm or 5 pm daily, five days a week. Since she must travel an hour each way by combi (van) or bus, she decided to take the 11 am slot. She was told that she will be taking classes in hair cutting, hair coloring and hair styling as well as makeup, manicures and pedicures.

She was instructed to wear closed-toe shoes, the school t-shirt and blue pants while in school each day. The pants were not a problem because blue jeans are accepted, and being the modern Mayan that she is, Soco owns a few pairs of blue jeans. But being a Mayan living in the countryside, Soco doesn't own a pair of closed-toe shoes, so we bought her a pair on the way home.

She was given a receipt, an attendance card with instructions on how to deposit the tuition into the school's Banamex bank account and a list of supplies needed for the first day.

The supply list was typed up on a tiny piece of paper, smaller than a Mayan fist. Supplies listed included hair clips (called mariposas or butterflies), brushes and combs, a spray bottle, two school t-shirts, a school uniform jacket and a maqui, or manniquen head with real hair. The maquis were on backorder so she has to pick that up later. There was a brief moment of excitement when she tried on the uniform and couldn't help but smile, but most of the proceedings were carried on with much Mayan seriousness on all sides, with the crazy gringa snapping photos over in the corner. Soco walked out with two bags of supplies, an attendance card and a new pair of shoes. 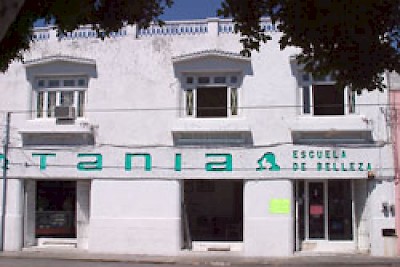 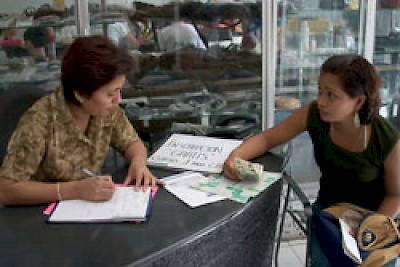 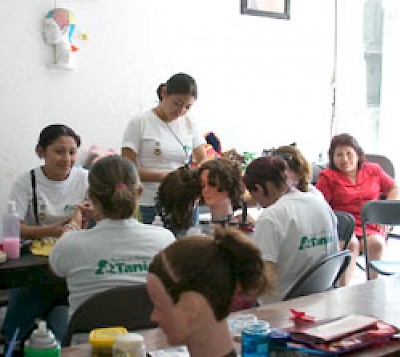 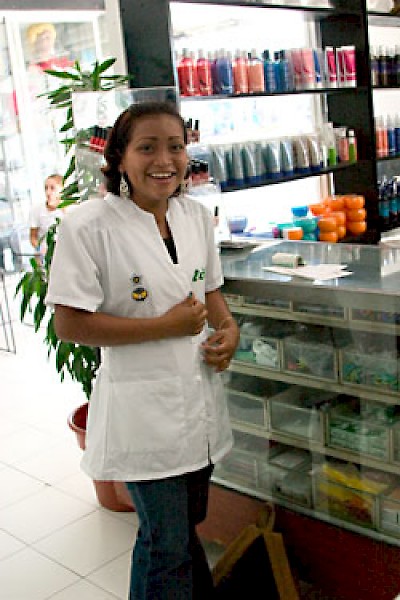