LIVING / A Rare Night Out in Merida Email & Share

A Rare Night Out in Merida

The last few months have been officially brutal when it comes to work around here. The Working Gringos have been earning that moniker ten times over, working weekends, late nights... you get the idea.

Last night, we found ourselves still buried in work but with two commitments we felt obligated to fulfill. Yes, we had to take off our t-shirts, toss the flip-flops, put on our nice clothes and makeup, and actually go out after dark. As it turns out, we're so glad we did.

The first place we went was the Soho Galleries for a pre-opening of the new Cuban Art exhibit that will be showing there until March. Not only were the walls newly filled with art from Cuba, but the artists themselves were there, meeting and greeting with those of us who had come out to meet them. The art runs the gamut from abstract to realism, from colorful to monochromatic, from realistic to fantastic, with allegory and metaphor to spare. There were four large pieces by one of our favorite artists in the group, Frank Martinez. And we were fortunate enough to speak with the artist himself, an earnest young man with a sense of humour and a classical painting style that he uses to create allegorical images relating to Cuban politics and daily life.

Another painter whose work stood out was Harry Sam, a painter with a realistic style whose cats and birds seemed about to leap or fly out of his paintings. The composition of his paintings is exquisite, and complemented by his subtle colorings and careful brushwork. Carlos Camero's work showed incredible versatility, from traditional landscape to the fantastical landscape of a work entitled La Casona. And Jose Fuster, an older and more established artist whose work has been highlighted on the Travel Channel and Sixty Minutes, had more than ten paintings there, with whimsical subject matter that is also full of political commentary and humor... and chickens. We're not huge fans of abstract art, but the paintings of Enrique Baster were positively mesmerizing, masterpieces of color and harmony that seemed to reveal more the more you looked at them.

The art and cameraderie of the gallery would have been enough for one night, but this evening had more in store for us. We took ourselves just a few blocks away to Paseo Montejo and the new Rosas y Xocolate Hotel and Restaurant for a press conference announcing the opening. This event included a tour of some of the rooms, the fitness center, many outdoor areas and a lovely swimming pool. The Belgian chocolate store wasn't open yet, but we're told they will be moving in this week. The Spa that will specialize in treatments with chocolate-based products was also not quite ready yet, either. But the hotel, the restaurant and lounge are all open and beautiful, a collaboration of many people including the owner, Carol Kolozs and the architectural/interior design team of Salvador Reyes Rios and his wife, Josefina Larrain.

One of our favorite spots in Merida now is upstairs at the Moon Lounge, an open air lounge and bar that sits above Paseo Montejo, allowing for a view of the night sky AND the people walking down below. When we were there, the music was eclectic and not too loud, piped in from a music service in Miami that assures varied and new music, producing just the right mood. Drinks were generous and not overpriced. And the chef's special hors d'oeuvres, not on the menu, were tasty and delicious.

For dinner, we went down below to the inside dining room. We could have also eaten outdoors, surrounded by reflecting lily pools and colorful stucco walls that create a jewelbox effect for that part of the hotel. The indoor dining room is both intimate and elegant, with upholstered chairs and romantic lighting illuminating walls that look like they're made of chocolate. We enjoyed an Angus rib-eye steak, cooked to perfection and served with small roasted potatoes and onions. We also had a risotto dish with scallops and a mild but tasty tomato sauce, as well as a fresh arugula salad with shredded parmesan and a lemony dressing. Everything was incredibly fresh and beautifully presented. We accompanied all that goodness with a Barón Balché Zinfandel from Baja, Mexico, finished to resemble a French Bordeaux... we know, that doesn't sound right. But it tasted oh so right... Dinner ended with espressos, a bit of Xtabentun and a panne cotta topped with what tasted like homemade chocolate ice cream.

If you decide to take yourself to Rosas and Xocolate to enjoy the experience, be sure to also check out the art that graces the walls of the lobby, library and the restaurant. The works were chosen by the owner from the collection at Gallery Tataya in Merida Centro. Many of the works are modern pieces by Cuban artists and they look stunning in the muted colors of the tasteful environment that the hotel provides. Some are property of the hotel, while others are for sale. Also represented on the walls of the hotel and restaurant are works by one of Merida's most serious artists, Marcela Díaz. Overall, we were pleased to see how beautifully the art compliments the interiors of the building, while the building provides a lovely venue for viewing the art.

Our rare night out had turned into a real treat... while we've been working hard, burying our noses in our computer screens, it seems many others have been busy too, working to bring a new and brighter shine on the jewel that is Merida. 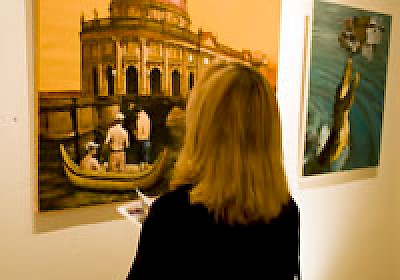 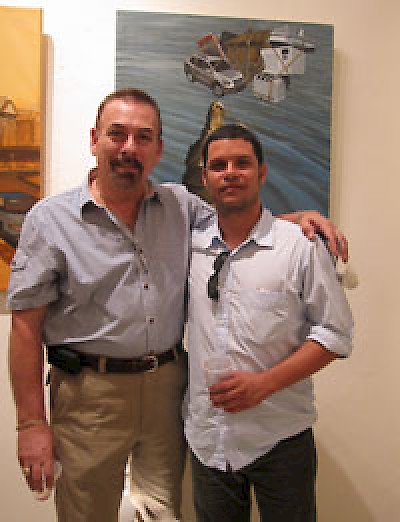 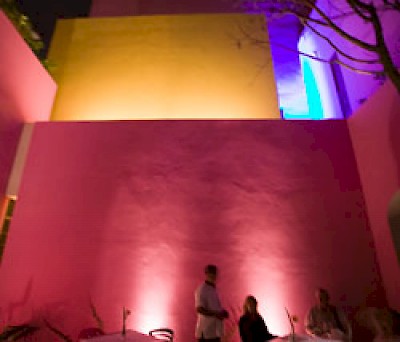 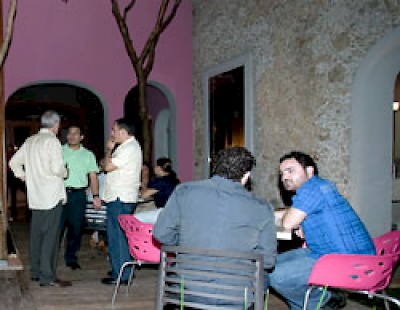