The first time we circled the park in Itzimná, a wedding was just finishing and people were filing out of the church. By the time we found a parking space and walked up to the church, it was filling up with the guests for the wedding that we had been invited to attend. (and as we were leaving later, a third bride was driving up.) The charming little Catholic church in Itzimná is a popular place with Merida brides!

The bride and her bridesmaids were outside the church, giggling and getting in line. Each bridesmaid wore a dress of matching material, but each one was a different style to compliment the figure and height of that particular woman, a local tradition that we know many bridesmaids back in the United States would be happy to adopt. Our bride, a bright, educated Yucatecan woman marrying a local businessman, stopped for a moment on the arm of her tuxedo'd father, adjusted her dress and smiled as she walked confidently down the aisle... the picture of a modern Mexican beauty.

The mass was in Spanish, making it diffcult for us to understand. The singing was good and live, but the singers were hidden from us. The bride and groom were also unseen for much of the ceremony, sitting down in front. Two priests who had never been married talked about how to have a successful marriage, and the congregation dutifully dropped coins in the baskets when the sermon was finished (as did we...).

The sermon gave us a lot of time to look around at the people in the pews. Sitting right in front of us was an even younger example of a modern Mexican woman, a beautiful twenty-something with shiny black hair in a complicated updo, wearing a sleeveless long gown. Her novio stood beside her, hair gelled to a jaunty perfection that added a slight whiff of rebellion to his suit and tie. When they looked around, as they sometimes did, we could see the faces of handsome, dark-eyed youth, with an air of something we thought young people just didn't have anymore: innocence. With our eyes closed, our imaginations placed them in a Mexican calendar painting... she dressed in a long skirt holding a basket of fruit, he astride a horse and smiling, both of them enlightened by a Mexican sunset. They were so quintissentially Mexican and so beautiful... they brought tears to our eyes.

With a blast of joyous music, we awakened from our Mexican fantasy as the bride and groom walked back down the aisle. Outside, a few greetings were exchanged and then everyone agreed: let's go to the party!

The party, it turns out, was spectacular and gave the impression of sparing no expense. Maybe 100 people went to the church ceremony, but probably 500 people attended the party. It was held at a local hacienda, San Antonio Cucul, complete with valet parking service, dramatic lighting in the casa principal, and sweet-smelling flowers strategically placed around the entrance. After going quickly through a traditional receiving line with bride, groom and their parents, we walked down stone steps out of the casa and into the garden, which had been transformed into a major venue.

Two huge tents were set up on either side of what looked like a living room area on the grass, complete with couches, chairs, tables and a huge table with the cake and hundreds of other sweet delicacies. In front of all this, a stage was set up complete with concert lighting and sound equipment, and the musical instruments waiting for an entire live band.

People swarmed in and sat down at the table, served by more waiters than you might see in all of downtown on a Saturday night. No need was left unattended. Drinks were on the house... and not just champagne. Anything you wanted. There was a menu on the table that outlined the entradas, the dinner, the midnite snack and breakfast. The food and drink just kept coming, and when it started to slow, the liqueur cart was set up to serve tequila, Xtabentun, Bailey's and the like.

But first, the sound of Queen's "Somebody to Love" blasted from the stage, fireworks exploded above, and the bride and groom entered the main seating area in triumph. They visited their friends and family at the tables for awhile, then made it to the stage for their first dance. The Carpenters sang 'We've Only Just Begun', the perennial favorite, and the happy couple danced and sang to each other, while at least three professional photographers snapped and taped and circled. The crowd watched dreamily, oohing and aahing when more fireworks lit the stage, the music changed to something more uptempo (a song in Spanish) and the couple continued their dance and continued singing to each other. The next song was played during the traditional Father-Daughter dance, and then the live band came out and everyone joined in.

We learned that wedding traditions here are pretty much the same as ours... the father-daughter dance, the reception line, the toasts, the tossing of the bouquet. Massive amounts of photos are taken, including photos of groups of family and friends, often in proximity to the wedding cake before it is cut. There might even be a photo taken of the bride and groom cutting the cake, but the bride and groom feeding each other is not a local tradition.

According to our sources, the traditions didn't used to so closely mimic the United States. Even algo nuevo, algo viejo, algo usado, algo azul )('something old, something new, something borrowed and something blue') is now a tradition here in Yucatan. We learned that there is a local tradition to play a practical joke on the groom... anything from throwing the groom into the pool (if there is one), throwing him up in the air repeatedly, or undressing him in the men's bathroom, and then sending the bride in to get him dressed again. We did not witness any of this... maybe we left a little too early (at midnite).

If this had been a more modest wedding, we might have seen some other local traditions like pinning money for the honeymoon on the veil of the bride as she visited your table, or putting coins into the shoe of the groom as it was passed around among guests at the reception. We would have gone also to the church wedding where the father of the bride walked her down the aisle and gave her away, and we would probably have retired to a family home where the food served was made by friends and family.

But a modest wedding this was not. After eating a multi-course meal and downing uncountable mojitos and sodas, after wedding cake and cookies and coffee and after-dinner drinks, we finally took our leave of the festivities. From what we could tell, the party was just beginning. The dancefloor was crowded with the bouncing, dancing, arms-in-the-air exuberance of beautiful young people, including our Mexican calendar girl, now changed into a mini-dress for the occasion. Non-dancing adults and young children lounged around the tables, holding loud conversations that could barely be heard above the music. We didn't see the bouquet-tossing, we didn't hear the toasts and we didn't partake of either the midnight home-baked-bread-and-cheeses buffet, nor the breakfast that was on the menu at the table, planned for about 4 am.

We took our leave early, thrilled to have been invited to such a joyful affair where two smart and accomplished people seemed so happy to be together. We were sure that our table, which had politely spoken English the entire time we were there, would happily revert back to Spanish now that we were gone. As we walked down the driveway to our waiting car, we were reminded that no matter where they take place, weddings affirm the spirit of love and family. We felt enveloped by that spirit here in our Merida home and with our new family of friends.

The bride and groom took off, we hear, for a multi-city tour of the United States, including Vegas of course. They'll be back soon, and we look forward to watching them grow into their relationship as we join the chorus of friends and family that will start asking, "So, when are you going to have a baby?"

Another visit to a local ritual, the Quinceaños, Mayan-style 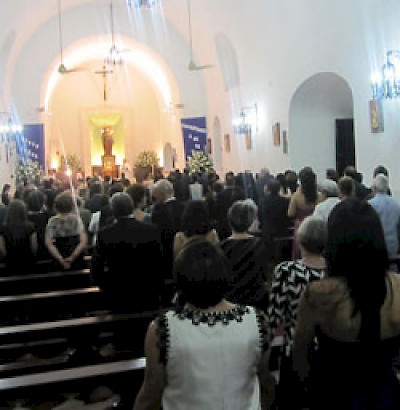 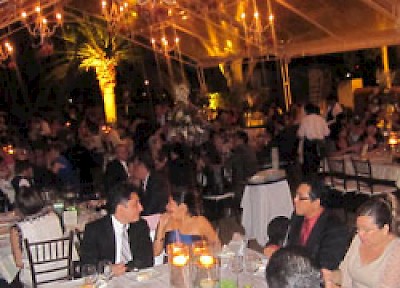 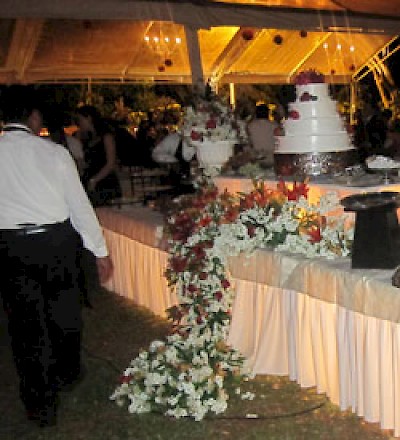 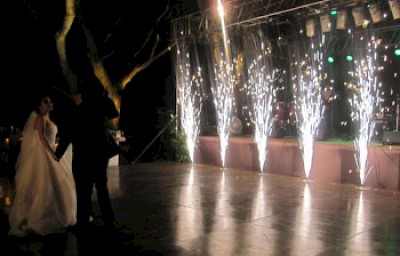 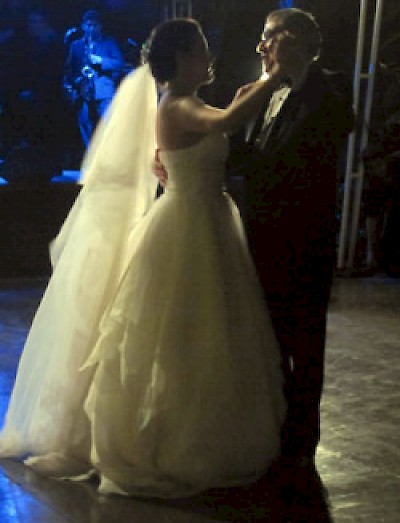 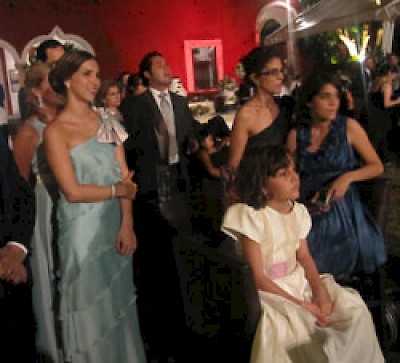 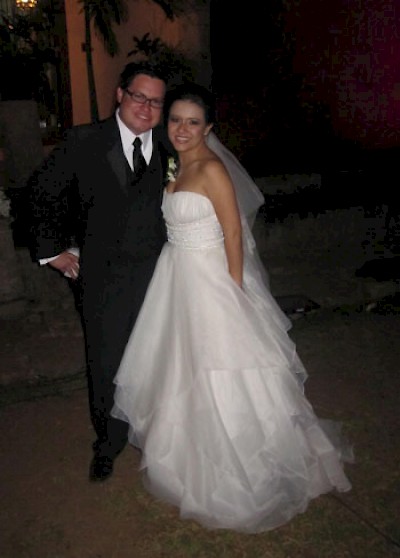