Acanceh (pronounced ah-cahn-KAY) means "dying deer" in Mayan and it's a bustling pueblo about thirty minutes from Merida, following the new highway south from the east-bound 180 toll highway. It is close enough to the White City that it can be considered a bedroom community, and certainly many of its inhabitants work in Merida or in the maquiladoras which pepper the countryside in that area.

This past Friday, the central plaza was emptied and covered with white gravel. This was to be the scene of the most compelling part of the events to come: the crucifixion of Jesus Christ. Surrounding one side of the plaza is a large Franciscan church, called La Natividad, a second church devoted to the Virgin of Guadalupe, and the town's mercado. On another side is the parque, with its fountain, trees, benches, topiary gardens and prominent deer statue. A third side has a row of business and residential buildings. The town is arranged using typical Spanish colonial design, with one exception. On the fourth side of the central plaza, you'll see something rather unusual, yet something Acanceh is known for: a Maya pyramid.

Archaeologists believe this and many of the other 400 Mayan structures of Acanceh were initially built during the early classic period, roughly 200-300 years A.D. and then elaborated through the late classic, around 1,100 A.D. The structure on the main plaza is usually called "The Pyramid". A climb to the top is rewarded in two ways. The first is a lovely view of Acanceh, including some of the other Mayan structures and the surrounding jungle. The second is a series of five "masks", which are large bas-relief sculptures made of stone and covered in stucco. These are currently protected from the elements by modern, corrugated fiberglass shelters, which also protect the visitor from the heat of the day. A bit farther to the south, you'll find the "Pyramid of the Stuccos", which also has bas-relief sculptures, these depicting human-like animal forms. Most still wear some of the bright pigments with which these ceremonial centers were originally painted.

Acanceh was an important destination between Mayapan, the last of the great city states in Yucatan, and T'ho (now called Merida). With the decline of the Toltec influence from the west and resulting civil wars between the city states, the Maya began to spread out and develop many smaller, self-contained villages based on agriculture and trade. While many of the former city states were maintained as ceremonial centers and pilgrimage destinations, they were no longer the center of Maya daily life. When the Spanish arrived, they soon recognized the situation. They co-opted the Maya caciques (chiefs) and built churches at the Maya ceremonial centers using stone retrieved from the pyramids. For this reason, most of the important colonial towns and cities of Yucatan show few traces of Mayan architecture, two notable exceptions being Izamal and Acanceh.

The Maya of Acanceh devoted themselves to the Catholic faith with great reverence and have cultivated one of the most elaborate and authentic of the Passion Plays performed around the Yucatan Peninsula during Semana Santa or Easter Week. As all Christians know, the Passion of the Christ is a play performed since the European medieval period that portrays the traditional story of the last hours in the life of Jesus. The Play begins around noon, takes roughly two and a half hours to unfold and is performed at several different locations around the center of town. It begins with the first trial before Pontius Pilate and includes the audience before King Herod, return to Pilate, the release of Barabas, the scourging and humiliation, the Via Cruces (procession though the streets with re-enactments of the twelve stations of the cross) and the crucifixion. If you pay close attention, other events occur on the side, including the suicide of Judas. These scenes are all portrayed in Roman and Middle-Eastern costumes, with serious devotion on the part of the huge Maya cast, so don't be surprised if the overall effect transports you to an unexpected time and place, a juxtaposition of several ancient cultures.

Before and after the play, the people of Acanceh and their visitors are in quite a festive mood. There are plenty of puestos (booths) set up for buying refreshments and recuerdos (mementos) during the day. The churches, shops and archaeological zone are all open as well. Although the weather on the day we visited was pleasant, be sure to wear a hat, good walking shoes and bring your favorite bottled water, because you may find yourself spending more time in the Yucatan's outdoors than you normally would.

The video below is in two parts. The first is a short tour around Acanceh prior to the Passion Play. The second part is a (very) edited version of the Passion Play itself and may not be suitable for all viewers. However, despite appearances, no one is actually harmed during the performance. While we admit that the actor who plays Jesus endures an undoubtedly grueling experience, the effects are (mostly) stagecraft and, unlike some other performances around the world, no serious injuries are inflicted. 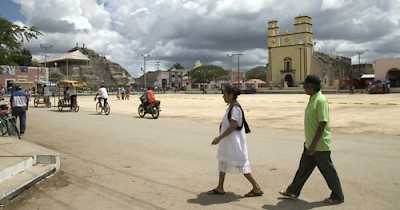 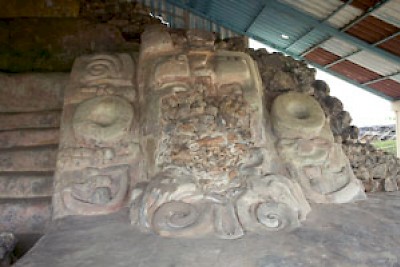 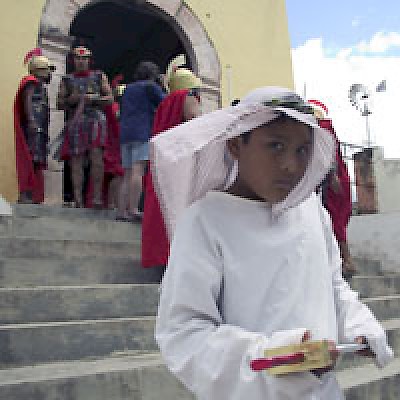 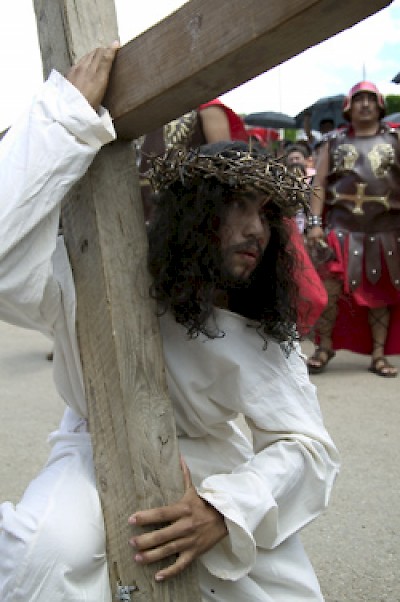 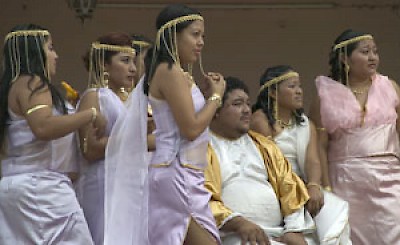