With the rainy season, the forest once again has grown dark with shadows. Fewer forest plants are flowering now, probably because in the shade pollinators would find it hard to spot the blossoms. An impressive flowering peak occurred right before the rainy season began, when the most leaves had fallen and the forest was the lightest inside.

Nowadays at forest edges, along trails, and all around my traditional Maya house however, you’ll find the knee-high, purple-flowered herb shown above.

At first I had no idea what it might be, but then I began looking at the flowers systematically and gradually its identity began crystallizing in my mind. First of all, the purple corollas aren't corollas at all, but rather corolla-like calyxes. I knew because no regular, green calyx lay below each colored structure. Also, the subtending things that at first looked like green calyxes turned out to be involucres composed of grown-together bracts, or modified leaves. Also, the flowers each bore three stamens instead of the expected five. A blossom close-up shows all this below: 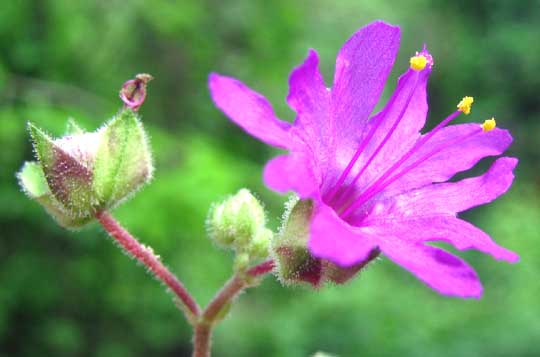 That's also in the genus Mirabilis and therefore a four-o'clock. It's MIRABILIS VIOLACEA. I can't find an English name for it so I'm calling it the Violet-flowered Four-O'Clock, since that's what its technical name, violacea, calls it.

As with regular Four-O'Clocks, these blossoms don't last long. They're open at dawn but by around 10 AM they're drooping, and by noon they're gone. An interesting feature of the genus is that the flaring part of the corolla-like calyx drops off, leaving just the shriveled base atop the ovary as it develops into a fruit. In the last photo, at the left, such browning remains of a broken calyx can be seen atop a developing ovary (one of three inside the calyx-like involucre).

This was nice, seeing a new "variation on the Four-O'Clock theme," one finessed more elegantly than even Bach could have managed in a fugue.

This article is adapted from Jim Conrad's Naturalist Newsletter. Jim is a naturalist with years of experience observing the ecology of the Yucatan Peninsula and beyond. The following article is adapted from the May 30, 2010 Newsletter issued from Hacienda Chichen Resort beside Chichén Itzá Ruins, central Yucatan, Mexico. You can find the original article on backyardnature.net

All images and text at the backyardnature.net website, unless identified as produced by someone other than Jim Conrad, are copyright free, in the public domain. 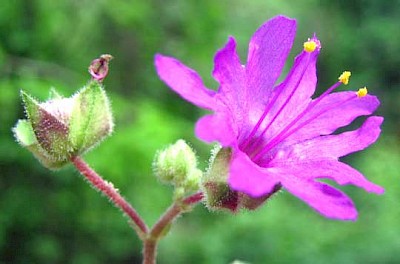