The Yucatan is home to a world-famous species of vine with languid white flowers commonly known as vanilla. Indigenous people in Mexico enjoyed the sweet flavor and the Aztecs dubbed it "black flower" for the dark color of cured vanilla bean pods. If you go hunting for one, Jim Conrad advises to look for thick, white aerial roots, which are a tell-tale sign of an orchid. The succulent green vines blossom only one morning per year, so it won't help to look for the pale flowers.

Many are surprised to discover that vanilla flavoring comes from an orchid, which--if pollinated--develops a pod with world-renowned sweetness.

When the American Orchid Society dedicated its new visitors' center in March 2001, the gift bags distributed contained a small bottle of McCormick vanilla extract. One individual was overheard asking "Why would they put a bottle of vanilla in a gift bag?"

The vanilla origin story tells of Princess Xanat--forbidden by her father from marrying a mortal--who was beheaded along with her lover. The first vanilla orchid blossomed at the site of their execution. Perhaps this story was intended to convey the supernatural as well as the bittersweet nature and sacrifice of cultivating this difficult species.

For hundreds of years vanilla could not be cultivated anywhere but outside of its native habitat. The flowers would blossom, but the pods wouldn't develop. This was a problem because the pods begin to ferment immediately after harvest. There was no way to bring the flavoring to market. The missing factor was vanilla's natural pollinator: the melipona bee. It wasn't until 1819 that a method of hand pollination was developed, which enabled widespread cultivation in Madagascar and other tropical areas.

The work of hand pollination is painstaking, but not new. Long before Europeans took to vanilla’s taste, the creeping vine grew wild in tropical forests throughout Mesoamerica. While the Totonac people of modern-day Veracruz, Mexico, are credited as the earliest growers of vanilla, the oldest reports of vanilla usage come from the pre-Columbian Maya. The Maya used vanilla in a beverage made with cacao and other spices. After conquering the Totonacan empire, the Aztecs followed suit, adding vanilla to a beverage consumed by nobility and known as chocolatl.

These days, less than 1% of vanilla is natural. The demand is too great. Synthetic production methods were developed which are indistinguishable from natural vanilla. The natural plant chemicals found in vanilla, which give it distinct characteristics are burned off during baking or cooking. Therefore, the place that natural vanilla really shines are in ice cream and perfumes.

Be careful of imitations. The FDA has identified fake vanilla often contains coumarin, an extract from the Tonka bean, which can cause liver damage. Always buy local vanilla from a trusted source!

All this talk of vanilla is making me hungry. Time to experiment with Mayan cocoa beverages. What's your favorite vanilla recipe? Share it in the comments and thanks for reading! 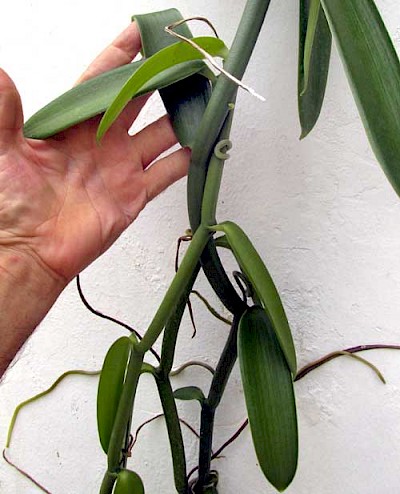