Suddenly Its All About Wilma

We're not too worried about the hurricane. If we were living in Cancun or Tulum, we'd be boarding up doors and windows, but here in Merida we'll probably only get bad weather. Hurricanes generally lose steam when they come over land, and Wilma has a lot of peninsula to travel before she gets here.

But everyone's talking about the hurricane and it's already intruding on our daily lives. We find ourselves in the unfortunate situation of having a broken clothes dryer and a broken air conditioner right now. When we called people to repair them, both were willing to make appointments with the caveat that if the hurricane comes, they wouldn't be here. One of our client appointments cancelled for tomorrow because of the hurricane. Lots of people are telling us about their wives, husbands, cousins or whatever who have come from Cancun to stay with them to wait out the hurricane.

When we first came to Merida, we wondered what everyone did for a living here. There didn't seem to be that much industry or even that much tourism. And there are apparently a lot of wealthy people, too. Every car dealer known to man has a dealership on Paseo Montejo, the main drag from the center of town to the higher rent district in the North. We used to wonder who drives all these Jaguars, Mercedes and Land Rovers? We thought this was a third world country... or a second world country at least.

It turns out that most of the people who own and run hotels and other tourist franchises in Cancun don't live in Cancun, they live in Merida. And they lived in Merida before Cancun was a gleam in someone's eye. Many Meridanos invested in Cancun from the beginning and that investment has of course paid off handsomely. Now, of course, Merida is its own hub of industry and commerce. It is, after all, the capital of Yucatan State, and the largest city on the whole peninsula. Even people from Belize come here to do whatever it is one does in a big city (buy cars from auto dealers, perhaps...). But a lot of Merida's money still flows from Cancun and the Mayan Riviera... and so even if Wilma doesn't actually get here, we will feel her effects.

And here is what the Diario de Yucatan says Wilma viene con furia... (Wilma is coming with a fury!) And they give numbers: 12 victims of Wilma in Haiti. 74,000 tourists who evacuated yesterday from Cancun, Cozumel and Isla Mujeres. 36,000 meals and sufficient bottled water available and waiting in the state of Quintana Roo for emergencies. 1,165 shelters prepared by authorities in Quintana Roo. 75,000 students not in class today. 1,088 additional shelters available for temporary refuge in the state of Yucatan. 6,300 inhabitants of El Cuyo, Rio Lagartos, San Felipe and Las Coloradas evacuated.

For the last twelve hours, a strange fog-like mist has hung over the city and now it has begun to rain. We can still see blue sky in some directions, so it's really not much yet. To look at it, you would hardly know that something the size of Hurricane Wilma is just over the horizon!

As long as there is electricity, we'll keep posting. 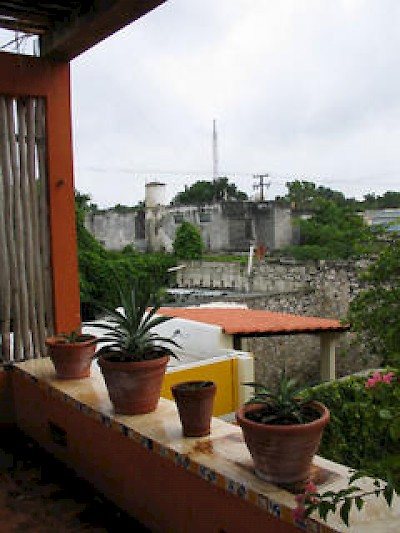