What's in a (Spanish) Name?

If you aren't an aficionado of all things Mexican (which we weren't when we first moved to Yucatan), during your first few months of living here, you will meet people with names that are unfamiliar. Some of them are cute, some are funny and some are just downright odd.

Let's start with Spanish names. In our pre-Working Gringo days in California, we were familier with names like Jose, Jorge or Maria because California roots are, after all, Mexican. We suspect that perhaps many of the Mexicans we came in contact with may have adopted these more normal Spanish names to make life easier for themselves.

Upon immersing ourselves in Yucatan, we were confronted with names like Socorro, Izauro, Santiago and Ignacio... names that were definitely new to us. Some of these names (like the ones just mentioned), we found rather beautiful. Working Gringa's Spanish name is Elena, yet another beautiful name. But Working Gringo's name translated into Spanish has not been quite so painless. While "James" is a perfectly fine name in English, the Spanish version of James (pronounced "Hah-mess") is rather uncommon and not quite so pleasing. What's more, the alternative of Jaime always raises a chuckle from our Spanish-speaking friends - we're not sure why. Apparently, Santiago also means "James" and Working Gringo has found that much more amenable.

Of course, if you don't like your name, there is always the option of a nickname. Nicknames are popular here, but connections to their antecedents have not always been obvious to us. Here are some Mexican nicknames that we have run across and the "given" names that they are related to:

Then there are the stranger dimunitives. There is a popular hardware store in the Yucatan named Boxito. From our Mayan language studies, we have learned that box means "black" and the Spanish suffix -ito means "little". As it turns out, we were right! Boxito is a nickname given to a little guy who has dark skin. It is a dimunitive name, given out of affection or familiarity, not out of disrespect. And it was probably the nickname of the man who started this very successful chain of stores. Other dimunitives in that vein are Flaco (skinny man), Gorda (fat female), Gordita (little fat female), Guera (white woman), Guapo (handsome man), Rubia (blonde woman). And of course, just change the "a" to "o" or vice-versa, and the name gets a sex change. Fun and easy!

While we're on the subject, the habit of adding dimunitives to names is a charming one and we're not sure how we lived without it before now. Mama becomes mamacita, abuelo becomes abuelito, gata becomes gatita and the list goes on ad infinitum. If you work at it hard enough, you can add -ito or -ita to almost anything and that thing is suddenly little, cute and endowed with charm and endearment. Of course, this is also used for names: Lupe becomes Lupita (at least one cafe in every town in Mexico is Cafe Lupita), Estrella becomes Estrellita, Angel becomes Angelito, etc.

But our favorites are the names we would never have thought of in a million lifetimes. Our assistant, the Amazing Beatriz, has told us about people she has met (more than one!) named Annirev. We pondered over that for a few minutes when we heard it but she finally had to tell us that it is the abbreviation for Anniversaire de Revolución (The Anniversary of the Revolution), which is the way the holiday on November 20 is often presented on a calendar.

We ourselves have met more than one young woman named Leydi Diana. All the Leydi's we have met seem to be in their early twenties... hmmm! Certainly not a coincidence.

The Amazing Beatriz also told us about a story she read in the local paper a few years back. There was a local whose name was Onecent (pronounced "OHN-neh-sent"). We puzzled over this one too but she told us not to bother. The story was that the father of Onecent had been out in the milpa (corn field) one day, and he had found a coin on the ground. On it, the coin had the letters ONE CENT and when his son was born later that day, he was so named. He could have been named Ingodwetrust ("een-gohd-WAY-troost") but that probably didn't trip off the tongue quite so lightly.

When we were researching this article, we found a story from last summer about the Mexican government cracking down on "strange" baby names, trying to save their little citizens (paisanitos?) from future embarassment in the schoolyard. Apparently, inventive names are a Mexican tradition and a custom that we think is rather endearing. Adorable. Charming. It's a customita! (Okay, so it doesn't work all the time...)

Have you heard any interesting names here in the Yucatan? Please tell us... we're fascinated! 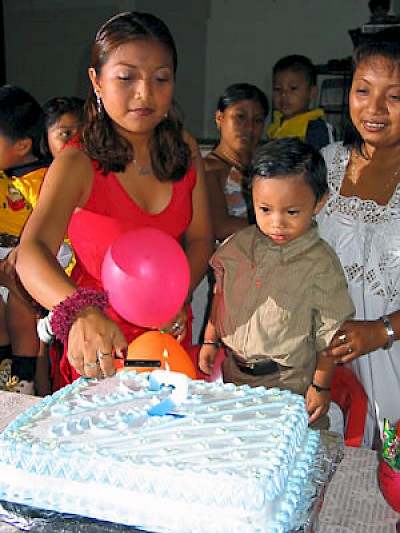