What is as small as a shoe, or as big as a car, flies as slow as a Turibus going around the Monumento de las Banderas or as fast as a that guy behind you from Mexico City and sounds like a fighter jet or a giant Africanized bumble bee coming to getcha'?

If you are already an "RC addict", you've probably guessed that what we are referring to is a remote-controlled airplane, the flying of which is a growing hobby all over Mexico, and Merida is no exception. We aren't RC addicts by any stretch of the imagination... in fact, our recent visits to an RC airfield were our first brush with this hobby that is practiced and enjoyed all over the world. And we were impressed with how much fun it seemed to be for the people who are involved. We were also amazed that there are many opportunities here for people who might want to practice this sport.

On a bright and sunny Saturday morning a few weekends ago, the Working Gringos set out across the flat expanses of the Yucatan Peninsula towards Motul and turned left at the sign to Mococha, about 20 minutes past the Periferico. We passed through Mococha and headed onward to Too (pronounced TOE). Too (yes, it is a funny name for a town... but there are funnier. Poop (pronounced poh-OPE) comes to mind) is no bigger than the big toe of the Jolly Green Giant... a cluster of about five houses and a church set down in the midst of green fields of henequen and monte. We turned right just past the church, and bumped along a dirt road for what seemed like miles, going around fincas and ranchos like a PacMan. Eventually, the road emerged into a clearing where a few bright tents had been set up against the sun, and a cluster of cars baked outside the tents.

This was the airfield of the Club de Radio Control "Too", a private remote-controlled airplane club based in Merida. According to our good friend and Eclectec employee Joseph, who is a member of this club, it is the nicest and most modern RC airfield in the Yucatan, and it's just getting started. It has a brand new 300-foot pavement landing airstrip, with areas for the pilots to service and park their planes.

This airstrip is privately owned, and so it costs to belong to this club: about $250 USD a year. The advantages of this location is that there are no properties around the airfield that could be damaged in the event of an accident, and radio interference is a non-issue (apparently a problem with other local airstrips). It certainly was out in what seemed like the middle-of-nowhere, but with the big tents, the port-a-potty, the generator fueling a sound system playing loud music (it just wouldn't be Mexico without music) and the huge coolers of cold drinks, we were cool and comfortable. Someday, there will be a clubhouse, we were told, but for now, it was more like camping.

But instead of being next to a stream or a lake, we were next to a miniature airstrip listening to Steppenwolf's "Born to Be Wild".

The club is mostly men (and a few women), young and old, who were incredibly friendly, incredibly serious about what they were doing and having an incredibly good time doing it. There were instructors teaching the new guys, and fathers sharing the activity with their sons. Some of the pilots there spoke English, some were visiting from Campeche and Quintana Roo. (We happened to be there during a competition that was going to last all weekend.) And there were a number of people there just to enjoy the spectacle.

As we waiting for the first flyers to take to the air, cars continued to arrive, disgorging their passengers and airplanes. Soon there were a bunch of planes lined up next to the tarmac. Each participant went to a table under the tent and signed in, registering the frequency of his or her radio control device. This is done to prevent two people using the same frequency at the same time, and the one whose plane is in the air at the time having a nasty surprise when his plane plummets to the ground. After registering, the men would line up their planes, fill them up with fuel and generally tinker and tweak until they were ready to fly. One at a time, the men would start their planes using a little generator to turn the propellers. Then they would step back and take their radio control device (a sort of wireless joystick) in hand, taxi their little machine down the runway and then take off and start flying.

We were not surprised to discover that, while we saw some very accomplished fliers who appeared to be in their mid to late 30's, the most impressive performers were two young men who were there with their fathers, and neither of them could have been older than 16. These boys had nice airplanes, and attentive dads who obviously shared their passion for flying but seemed happy to be the support crew for their young aces.

Watching these young fliers was a bit like watching guitar players in a good rock and roll band. They weren't swaggering or strutting or driving the girls crazy, but they were making music with their airplanes... visual music. The planes they flew zoomed past, turned and banked and stalled and dove and some even did it to the music. The planes seemed to turn the puffy-cloud-filled sky and their presence in it into a work of kinetic three-dimensional art.

We're sure there is a pleasurable sense of power and control for the fliers in the feel of the controls, but mostly this is a spectator sport, both for the spectators and for the fliers themselves. When a little airplane was streaking overhead, doing loop-de-loops and flying past upside down, it was flying with the dreams and visions of about 30 people packed inside its miniature cockpit. It struck us as a lovely way to fly without hurting anyone, putting oneself in danger, wasting a lot of jet fuel or getting airsick.

There were a number of older men there who seemed to be beginners and were taking instruction from some of the younger participants. One man we spoke with briefly is a Federal Judge who told us he discovered this sport only a few months ago. That day, he was learning the most basic skills: taxiing down the runway, taking off, flying in circles and landing. Even that proved to be too difficult eventually, and he crashed his airplane into the ground. Luckily, no one's bones or egos were damaged, and now the Judge will have a few evenings of sitting at home repairing the wings on his plane before he comes out again to fly.

Radio Controlled Aircraft apparently come in all sizes and prices, from small electric ones that can fit in the palm of your hand, to gasoline-burning scale models which can be half the size of their full-scale "real" counterparts. Here in Merida, most pilots fly sport airplanes ranging from 40-size trainers to 120-size aerobats (going from 65 to 80 inches wingspan and 5 to 15 pounds), which are apparently the predominant sizes in the United States as well. The day we were there we were also treated to the flight of a RC helicopter and a RC witch-on-a-broomstick!

To keep these fliers and their planes flying, there is a well-stocked hobby store here in Merida, called Heaven Hobbies, it is located in Colonia Aleman where most of these people buy their spare parts and kits. If the store doesn't have something, they will order it. Some people here also buy directly from Tower Hobbies or Horizon Hobbies on the internet and pay the extra shipping. It will cost the same either way, due to import taxes.

There are three RC clubs in Merida. The MonteSORRY RC Club flies in an empty lot behind the Liverpool Department Store. The location is easy to get to, the airspace and landing area are free to use and we're told the people are friendly. The downside is that the space is surrounded by houses, a construction site (for the new Liverpool shopping center) and businesses, all of whose antennae can and have interfered with a fliers' radio signal.

You can view the site on Google Earth here:

Merida's oldest RC Club is privately owned and charges $10 US per day to fly on one of the two 300 foot landing strips. Joseph says the landing strips are not in the best shape, and after watching them for a day, we can see how a pothole or bump on the landing strip might affect or damage a plane. There is plenty of tall grass and even some trees in this location, and it is located outside the main city area, so radio interference is almost non-existent. 'Fly-ins' are performed once a year and pilots come from other parts of the peninsula, from places like Cancun and Campeche.

Again, if you have Google Earth, this airfield can be seen here:

(By the way, Club Too's airstrip is so new that it does not show up on Google Earth right now. But seriously, if you just go to Too and turn right at the church, you'll find it.)

Fly-ins and Fun-Fly events are organized once or twice a year with each club. Usually pilots are sorted by categories (Beginners, Intermediates and Advanced). Contests consist of each flier performing several tests, like precision flying or "limbo", where pilots have to fly and/or perform precision maneuvers under a stick or a rope. Each flight is timed and monitored by other members to make sure they reach each milestone. In the end, the flier who completed the tasks in the fastest time takes home the trophy. The rest of the year, fliers go to the airstrips on weekends to test their planes and perfect their maneuvers.

While we were there, we not only took photos, we also videotaped the activities because it is really the kind of thing that warrants pictures that move. We visited with the fliers and were impressed by how friendly everyone was, what a sense of cooperation and geniality was in the air (along with the airplanes of course) and just what good clean fun it all was.

As we drove away, we passed a few groups of local children who were riding their bicycles to the airstrip from Too and Mococha. This may be a hobby that takes some money to participate, but apparently it has become a free source of entertainment for the local children in the surrounding area.

It seems to be a hobby for people with an engineering and tinkering bent, but something anyone can enjoy watching.

Oh, don't forget to see the video of this event by clicking here!

Up in the air, Junior Birdmen!! 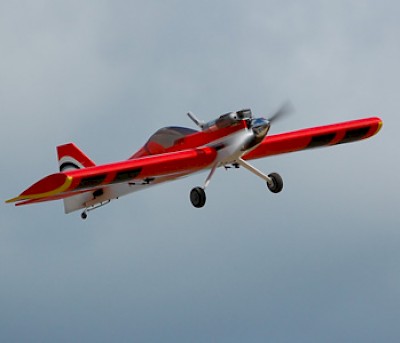 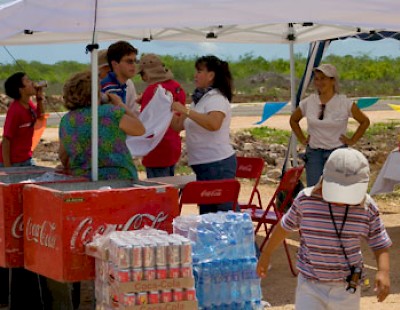 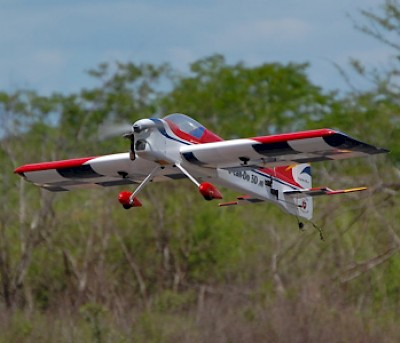 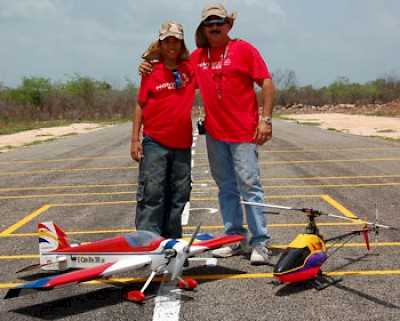 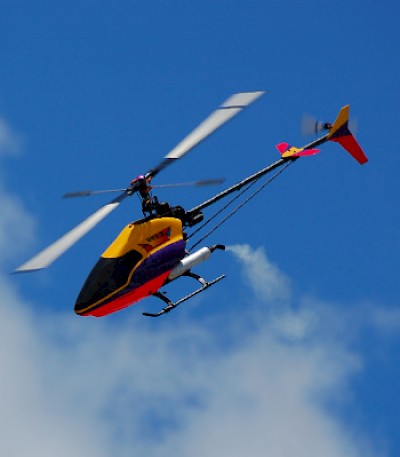 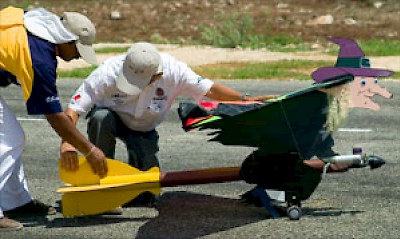 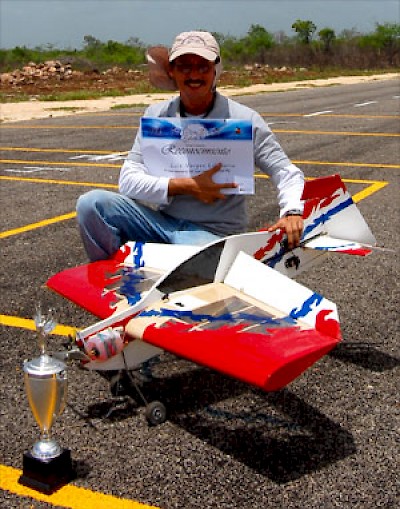 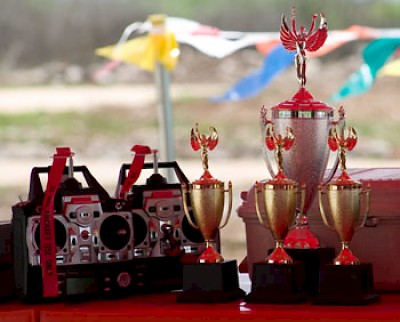