Days of the Dead

Editor's Note: Here's an article we're republishing for today about Days of the Dead. Enjoy!

From my perspective as a Canadian, at first glance, the images customarily associated with this time of year -- skeletons, skulls, ghostly spirits, fire, graveyards, tombstones and jack-o-lanterns-- always signal the second largest celebration in North America next to Christmas-- Halloween. Halloween, also known as Witches Night, Samhain, Summer's End or All Hallow's Eve, is a holiday that is celebrated annually in North America on the night of October 31, the eve originally calendared by the Irish, as the night before the onset of winter.

But if you're in Mexico, this autumnal celebration conjures up a ghost of a slightly different color...or colors. While many of the images are similar, the festival celebrated in Mexico, from October 28 to November 2nd, called Day of the Dead, pre-dates Halloween by a couple of centuries. The essence of Day of the Dead can perhaps best be described by what it is not. It is not a morbid fascination with death. It is not mournful. It is less of a macabre mockery of death with the spooky costumes and pranks of Halloween revelers, and more a celebration of life. Or the natural cycle of life, to be more exact. Indigenous peoples here believe that souls do not die – they simply go to a place of rest (Mictlan) where they continue to live on. The Day of the Dead is the annual celebration where those souls of our loved ones are welcomed back for a merry old visit.

Is Day of the Dead simply a Mexican version of Halloween? The short answer is Yes… but with an important twist.

Is Day of the Dead Related to Halloween?

The modern celebration of Halloween is a descendant of the ancient Celtic festival called Samhain, meaning Summer's End. Samhain was the first day of winter, and the end of one pastoral year. It was the time when the night became longer than the day, the last apples were picked, and the year began again with its dark winter half. It was marked like the other key annual Celtic festivals – with fire. The Celts believed that during this time the normal order of the universe was suspended and the barriers between the natural and supernatural worlds temporarily thinned to allow spirit interlopers.

When the Romans conquered the Celts, their festival Feralia, a commemoration of the passing of the Dead, melded naturally with the fire celebrations.

By the seventh century, the Roman Catholics had designated November 1 as All Saints Day, and November 2nd as All Souls Day (so as not to leave anyone out), both being an attempt to replace the paganistic Celtic festival of the dead with a church-sanctioned holiday. The whole shebang took its name from Middle English 'All Hallows' meaning 'All Saints' (or souls) and added their word for 'eve' - 'een'. Hallow'een embraced the paganistic aspects, incorporating big bonfires, parades and dressing up in costumes as saints, angels, & devils.

By the 15th century, when the Spanish Conquistadores landed in what is now Mexico, they discovered the Aztecs had a ritual that seemed to pay tribute to death. In existence for over 3000 years, what was later coined Dias de los Muertos, was a celebration to honor the dearly departed, those beloved folk who had passed on to the 'other side' of existence. The celebration implied that death was not an ending, but a continuation of life. Skulls were used to symbolize not only death but re-birth. They were used as emblems of respect, and wisdom. Instead of fearing death, the natives embraced it, for it was only in death did they become truly aware and all-knowing. In spite of the Spaniards efforts to quell this pagan ritual, the Day of the Dead refused to die. So, the best they could do was wrangle it in by shortening the previous month long event into a few days, changing the date so it coincided with the Roman Catholic All Saint and All Soul's Days.

Day of the Dead Today

Today, the Day of the Dead remains one of the most celebrated traditions in Mexico, in parts of the USA, and Central America. While it may seem strange for us to accept the fact that "death" and "festivities" can go hand-in-hand, for most Mexicans, the two are inextricably entwined.

The familiar Halloween-esque images are everywhere, in the markets and on the streets as the Mexican people collect items they need to pay homage to their relatives both at gravesites, in schools and at home.

From Folklore to Art

Some of the popular symbols have become iconic in recent years, such as the legendary Catrina (elegant lady skeleton in her oversize, festive hat). An entire craft industry has emerged around the Catrina image. Find yourself at any mercado and you can buy, year round, those plastic woven shopping satchels (sabucanes) adorned with her visage. Artist Ladislao Loera has made it his life's work to explore and create paintings and art objects founded in this milieu. He explains his passion: "Dia de los Muertos art is meant to show the duality of life, which is that it can only exist surrounded by death. This is reality, not superstition. The artwork is meant to show this and make death a part of life, to be accepted and acknowledged instead of feared."

This is not just a festival for the grown ups. The duality of life is importantly instilled in children at a young age. Fear of death is expelled through the use of toys like the calavera (skulls). Loera points out: "The first toys I can remember were a plastic skeleton and winged devil, gifts from my grandmother. Other kids had GI Joes or Batman action figures but I was never envious of them. My toys allowed my imagination to stretch its boundaries and make friends with the very things that gave other children nightmares."

Altars for the Dead

Nowadays, during the period of October 28 to November 2nd, in most homes, the focal point of the tributes is an altar -- erected on a cloth-covered table. It is festooned with photographs of the dearly departed, and all manner of items that will comfort, feed and nourish the traveling souls, including a wash basin and soap for freshening up. There will be zempasúchil (marigold flowers), copal incense, candles and perhaps trinkets they may have loved during their time on this plane. Sometimes they'll make a trail of marigold petals leading into the house to the altar, or here in the Yucatan, a cross on the floor in front of the altar made with marigold petals and chalk. The room might also be decorated with implements or tools the deceased may have used during their lives. Drinks for children, such as horchata – the almond rice milk, or chokó sakam, a protein rich, thick beverage made from maize will be served alongside bottles of Tequila and Mescal for the adults. Tamales and Pan de Muerto (a fragrant egg bread) are traditional food offerings as well as candied delicacies like sugared skulls. Of course, the favourite snacks of the deceased, themselves are ever present, so you may see all kinds of strange things on an altar.

Every Day is a Dance With Death

If you live in Mexico, it comes as no surprise to learn that each region of this complex and glorious country has its own unique approach to celebrating Day of the Dead. In the highlands of Michoacan it is known as Jimbanqua -- the party honoring the people who died that year with flowers. In San Luis Potosi, Hidalgo and the southern part of Oaxaca they call it Xantolo, which stands for "a communion between man and nature or man and god". In the Yucatan it is known as Hanal Pixan which means "the path of the soul through the essence of food".

By whatever name it is called, Dias de los Muertos is at the core of the culture of the Mexican peoples. For many of us in other cultures, death imparts a feeling of pain and loss especially for those who have not known their purpose or their path in life.

But, in Mexican culture, as the old saying goes: "Every day is a dance with death." And death is transcendence, transformation and even resurrection.

To make the picadillo filling: Combine the cooked vegetables with the chicken. Heat the lard in a large skillet, add the pureed tomatoes, and saute for 5 minutes. Stir in the vegetable-chicken mixture, the chiles, almonds, raisins, vinegar, sugar, cinnamon, and salt to taste. Cook for a few minutes to blend the flavors.

To make the masa: Combine the masa harina with the broth, sugar, and salt to taste. Beat well for 10 minutes. In a separate bowl, beat the lard until spongy. Combine with the masa harina and beat for 2 minutes more.

To put all together: Place a heaping tablespoonful of masa on each corn husk. Top the masa with picadillo. Fold the long edges toward the center to enclose the filling. Fold the ends of the husk to wrap the tamale and give it shape. If you like, tie the tamales with a strip of corn husk.

Place a bed of corn husks on the bottom of a tamalera or line a large large steamer and pour in 4 cups of water. Stand the tamales upright around the edge. Cover and cook for 1 hour, until the tamales are cooked through and the filling pulls away easily from the husks.

Editor's Note: This article and the recipe are brought to you by Patti Murphy, one of the founders of The Little Mexican Cooking School in Puerto Morelos on the Mayan Riviera. Photos were taken by Ellen Fields at Merida's Corridor of the Souls celebration on Calle 66, Friday night, October 29.

About Mucbil Pollo, the Day of the Dead food in Yucatan 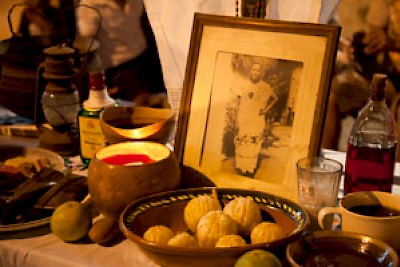 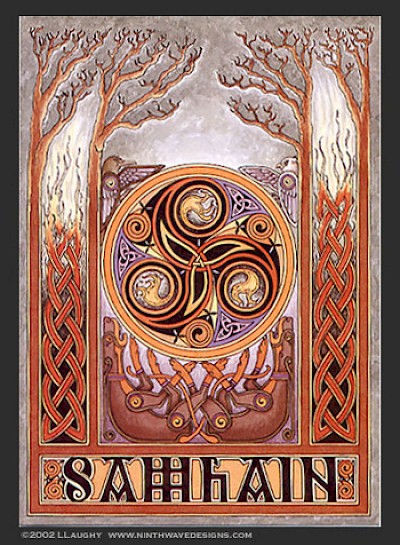 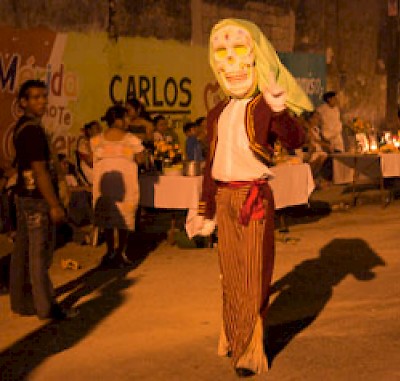 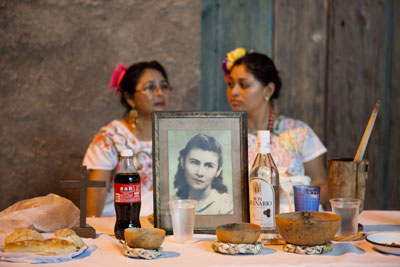 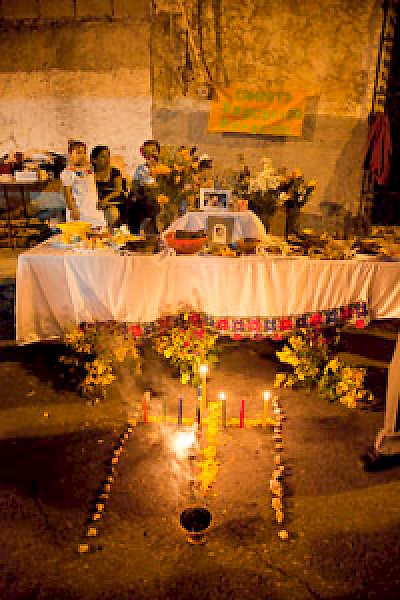 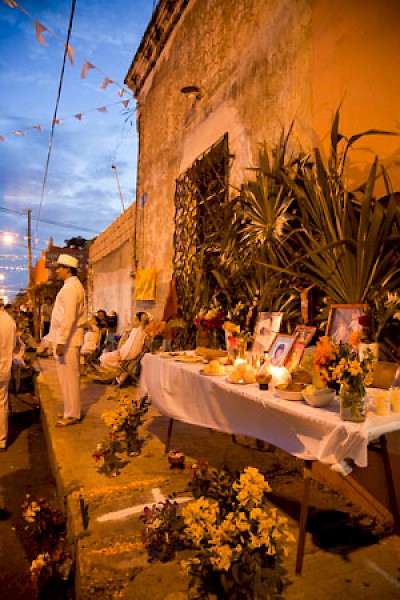