Cook It Raw Explores the Yucatan

What is Cook It Raw? And Why Do We Care?

Cook It Raw is an annual gathering organized by chef Alessandro Porcelli of internationally recognized and emerging chefs from around the world. The gathering aims to bring them together with food producers, community leaders, academics and cultural leaders to explore the politics of food through four guiding principles: environment, tradition, creativity and collaboration. The program aims to immerse the chefs in a culture, allowing them to examine local food systems, practices and traditions... all of which will, hopefully, be fodder for their creative endeavors in the future.

This year, Cook It Raw came to the Yucatan Peninsula. The program came without a pre-programmed agenda, planning only to be influenced by the people, products and ingredients that they met along the way during numerous field trips. This year of exploration and preparation is coming to a close and to a grand finale of sorts this week in Merida.

Ritual, Tradition and Day of the Dead

Starting October 28, chefs from around the world will gather in Merida for a week of events and programs. They will be focusing on Maya cuisine as it relates to Hanal Pixan, the Maya twist on the celebration of Day of the Dead. Celebrating Day of the Dead is a tradition now celebrated throughout Mexico, but it apparently dates back to ancient MesoAmerica. The way Hanal Pixan is celebrated today shows that, like most others here, the traditions have been mixed with those of the Catholic Church to create a unique celebration unlike others in Mexico.

Hanal Pixan is officially a nine day celebration, from October 31 to November 8. Separate feasts are held over eight days, with offerings made to the souls of ancestral children and adults. Hanal Pixan rituals incorporate the Catholic festivities of All Saint’s Day and the Liturgy of Souls, based on the idea that the dead live on in a separate realm from which they come to visit us every year. In Yucatan this week, residents will be preparing their households, cleaning and painting and setting up altars to welcome the dead when they come to visit.

The Maya roots of Hanal Pixan are seen mostly in the types of dishes served for this special occasion. Many of the dishes prepared during this time, including mucbil pollo and chilmole, were mentioned in the Popol Vuh, the Maya "Book of the People", a sacred text for the Maya culture. In the Popol Vuh, it is apparent that creation and death myths are very tied in to the food of the culture, including the myth that the Maya people were created by God from corn.

Many of the traditional Maya dishes are made with poultry... originally (and still in smaller, traditional villages) with turkey, but now in Merida mostly with chicken, which was introduced by the Spanish in the 16th Century. It is traditional to include three round mucbil pollos (also known as pibs) on household altars if the deceased is a woman, or four pibs if the deceased is a man. These numbers apparently come from the three-stoned hearth, signifying women, and the four-cornered milpa, traditionally the realm of men. The Cook It Raw program also mentions this, an important thing to keep in mind:

For the ancient and modern Mayan, the dead are never truly gone and remain connected to us throughout our lifetimes. Offerings of food and drink year after year are symbolic of the idea that the place of ancestral burial was in the home, and that the dead continue living with relatives, long after they are gone from this world.

The Cook It Raw explorations during this past year have also realized the importance of cocoa, known in Maya as ka'kau. They found that there are "several mixtures of cacao described in ancient texts for ceremonial, medicinal and culinary purposes. Some mixtures included maize, chili, vanilla (Vanilla planifolia), peanut butter and honey from the native bee named Xunan-kab (Melipona beecheii), a stingless species."

Keeping all this in mind, the chefs of Cook It Raw will be gathering together, exploring various parts of the Yucatan and will end their adventure here with cooking their own creations based on what they have learned.

The participants in this event (with their Twitter handles in parentheses) are:

The events of this week begin with a dinner at artist Jorge Pardo's house, where Alessandro will formally introduce each participant and give an overview of the week. The next day, they will leave early for Xocen, near Valladolid, where they will meet with local farmers Fatimo and Tomas Canul, who have let Alessandro use their milpa to plant local seeds purchased and planted earlier this year. The seeds were purchased at the Valladolid Seed Fair and include watermelon, Chinese bean, cucumber, melon, small pumpkin, lentils, and purple and red corn. The group of chefs will harvest the plantings and use their harvest for the dinners they prepare on November 2nd. While they are at the milpa, they will also participate in a Maya ceremony to thank the Gods for the harvest.

Later that day, the chefs will be introduced to students at Cocina Arte who will be assisting at the cocktail party on November 1st and the final dinner. After work, the participants will celebrate at La Negrita where the owner, Patricia Martin, will introduce the world of Mezcal, followed by dinner at Apoala in Santa Lucia.

Other events include a foray to a Tikul cacao plantation, lunch at Principe de Tutul-Xiu in Mani, breakfast at the new Wayan'e in Mejorada, private parties, a trip to Sisal to meet with local fishermen, lunch at Ku'uk where chef Mario Espinosa uses his home-grown herbs, vegetables, flowers and fruits, dinner at Nectar whose chef, Roberto Solis, worked with Alessandro at Noma in Copenhagen, and of course, attendance at the Hanal Pixan festivities in Ermita on Friday night.

There are two events (on November 1st and 2nd) where the chefs will finally prepare food of their own creation based on what they have seen and learned. Those events are open to the public and you can find out more about them in our Merida events listing this week. During those events, guests can enjoy an art exhibit curated by locals John Powell and Josue Ramos, which will feature work from local and international artists including Marcela Diaz, Joseph Kurhajec, Guillermo Olguin Mitchell and Silvia Barbotto.

Read about our first encounter with mucbil pollo.

Read about Hanal Pixan in Merida.

Read an interview with Alessandro Porcelli for Yucatan Living. 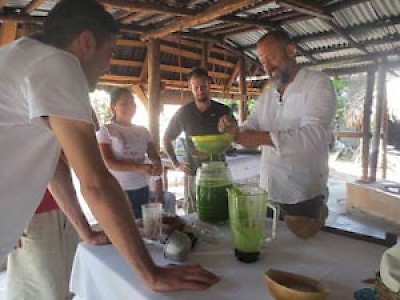 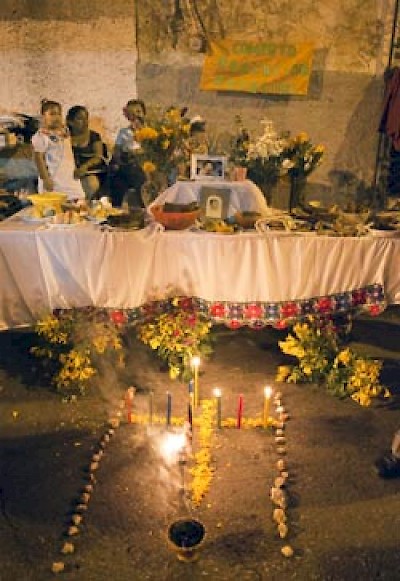 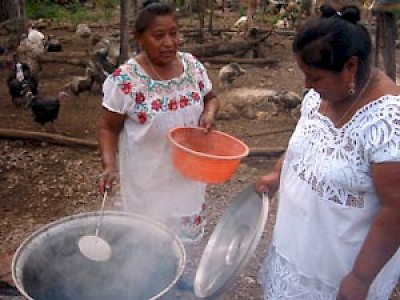 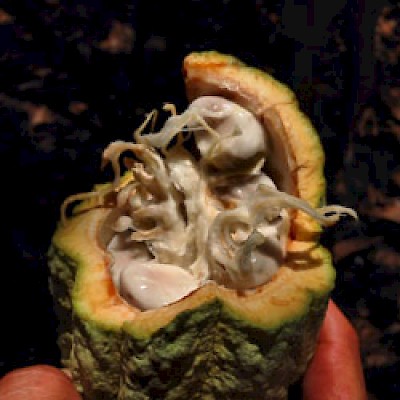 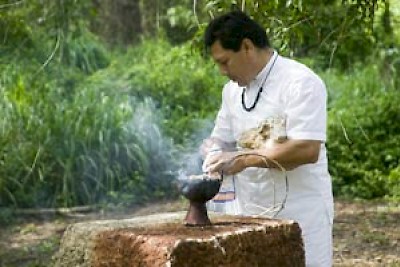 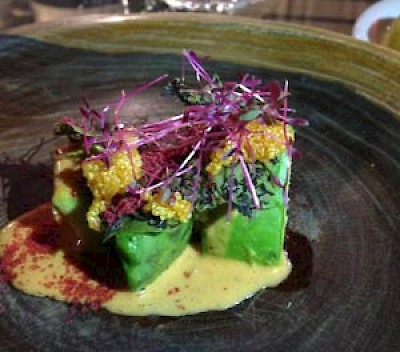