A Writing Tour Around Merida

Yes, we said we would report on the state of the Maya Riviera after Hurricane Wilma... and we will! But we've been so terribly busy since we got back from our trip.

For one thing, we just launched a new and extensive website for Hacienda Chichen. Part of our trip involved stopping there to take more photos. We'll write more about this place in the weeks to come, because it deserves a little more attention.

Secondly, yesterday we played host to a few friends from the States, one of whom is thinking of writing about Merida. Originally, she was going to write about haciendas, so we had a day of touring haciendas all planned out. But after talking to some people here, she changed her mind and decided to write about the expats here in Merida. So, instead of going to haciendas exclusively, we went to a number of places near Merida that are places that both tourists and locals love to go. Plus, this was her first time in the Yucatan... and how can you write about the Yucatan if you've never seen a Mayan ruin? or the beach? or a cenote? Or eaten a panucho?

We breakfasted at Hacienda Temozon, one of the Starwood haciendas. Going there for breakfast allows you to soak in the elegant ambiance without having to pay the price to stay there. We had a lovely breakfast and then drove back into Merida and then on to Progreso. The weather was just perfect, and the beach was inviting. The city of Progreso has really improved things along the malecon (the walkway along the beach). The restaurants are all looking nicer, cleaner, more modern and even... dare we say it?... hip (some of them). There were a lot of new palapas on the beach, and a smattering of visitors enjoying their beers and totopos (tortilla chips). There was even this cute group of waiters, playing checkers with Coca Cola and Sol bottle tops while waiting for the lunch crowd to arrive. We noticed that Progreso now seems to have beach-cleaning equipment because the entire beach had been raked and cleared of seaweed. Walking along the beach in Progreso is now a more pleasant experience. We're looking forward to going back there for lunch someday soon.

Next stop was Dzibilchaltun, one of the smallest but most charming of the Maya archaeological sites. There were very few people there yesterday and the weather... did we mention that? It was perfect. We stopped briefly in the museum, which we enjoy more every time we go, because the longer we stay here, the more we learn and so the more relevant the museum becomes. The House of the Seven Dolls was stunning against the bright blue sky (thanks to polarized sunglasses). And the walk from the House to the cenote at the other end of the sacbe (white road) wasn't quite as punishing as it usually is because the weather is so cool right now. The cenote there is one of the few above-ground cenotes, and it was being enjoyed by a bunch of local and visiting children. The water was crystal clear with fish and water lilies and a few lucky people basking in the sunshine. It was everything we could do not to jump in with our clothes on.

After the cenote, we had a snack (tuna ceviche and salad and fresh limonada!) at Hacienda Xcanatun, another lovely hacienda hotel that is close to Merida and an easy place to visit for lunch or dinner even if you can't stay the night.

We dropped the writer and her friend at their hotel for a siesta, and went home to take one ourselves. Two hours later, we met up with them at a friends home for a cocktail. We wanted her to see a beautifully renovated colonial home, and the Los Dos Cooking School is definitely one of the most beautiful. David and Keith were fabulous hosts, as usual, and managed to surprise us by bringing out old friends from the States who were there to take cooking classes. A pleasant surprise, and a fitting example of what a small town Merida is... and what a small planet we live on.

Dinner at the end of the evening was at Trotters, with eight of us... six expats there to entertain and inform with our different stories of how we got here, why we came and how we like it. We've been told that the readers of this website might like to hear some stories like that as well, so we will definitely include some expat interviews.

Oh, and here's the result of that writer's day with us: 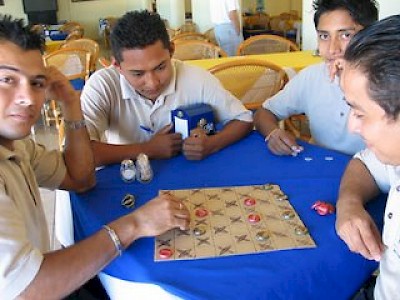 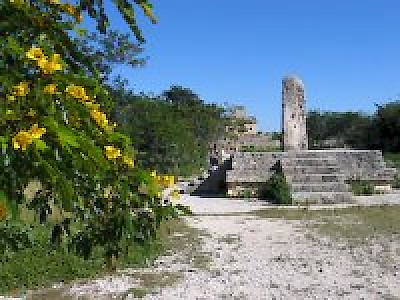 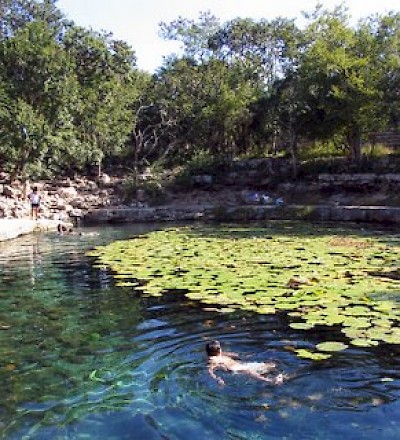