Art & Local Culture / Why They Call It Sisal Email & Share

Why They Call It Sisal

Yesterday was a perfect Yucatan day... blue true dream of sky, as e.e. cummings once said, and puffy white clouds, a breeze. Everything in the air said "a la playa!" and so we went.

When most people in Merida go to the beach, they go to Progreso, and Progreso is a great place. Wonderful spots to sit and eat guacamole and chips while drinking a cold beer, a little bit of shopping and lots of people watching. But this occasion called for something different, as it was the first day that URL, our four and a half month-old puppy, was going to see a beach and an ocean. We wanted to have lots of wide open space and as few people as possible. But we didn't want to miss out on that cold beer either.

So we set off to Sisal, instead. Remember the old days when people used rope? Remember that it was called "sisal rope"? Well, it's called that because back in the heyday of the Yucatan, when this place was rolling in pesos because of henequen, or "green gold", the rope that was made from henequen was shipped out of a port on the Gulf of Mexico called Sisal. Sisal, the pueblito, is still there. The dock is rotting and rusting and Sisal is only a ghost of its former self, which made it the perfect place for our Sunday outing.

The road to Sisal goes northwest out of Merida to a substantial town called Hunucma. Hunucma has a lovely town square, complete with gazebo and church towers, green shady trees and laughing children, lots of trici-taxis and a very healthy mercado. Just about the time we reached Hunucma, one of us was just dying for some cochinita pibil, and it turns out Hunucma has some of that as well. As we walked down a street, a middle-aged man called out "Cochinita!" to us and we figured it was Fate. We ate four or five tacos, rolled up with the delicious pork mixture inside, the sauce dripping down our fingers as we ate. The gentleman introduced us to his son and grandson, told us how handsome our puppy was, and talked to us about the upcoming corrida or bullfight that will be starring a famous Spanish matador, El Juli. But that is a story for another day.

With cochinita and Coca-Cola in our tummies (a typical Yucatecan breakfast), we continued on our merry way to Sisal. We passed over the swamps or cienegas where the flamingos haven't roamed much since Hurricane Isidore, and then we arrived. There are a few nice homes along the coast, mostly uninhabited except during the summer by the wealthy Meridanos who own them. The townspeople live farther away from the beach... about 5,000 of them, according to the pescador with whom we spoke.

As we suspected, the beach was nearly deserted at 11 am. There were a few families unpacking their picnic meals under the palapitas that provide the only shade on the wide white beach. On this day, the beach had piles and piles of rather smelly sargasso or seaweed, and almost as many piles of bleached white seashells. With the puppy in tow, we set off to walk down the beach and play in the water. The clouds provided occasional and welcome cover from the hot sun and everyone enjoyed themselves thoroughly.

When we got back from our walk, we sat down next to the aforementioned pescador, whose name was Gabriel. We were sitting on the step of the building belonging to the harbor master of Sisal, a very modest concrete building. As we have done before, we marveled that there seemed to be so little left of the once grand and apparently very busy port. Gabriel said that Sisal had lost its importance when they built Progreso, which was much closer to Merida and most of the haciendas. Gabriel told us that Sisal was very important in the past and was the site of many battles. He recounted that during Hurricane Gilbert, 16 years ago, the ocean had sucked away a lot of sand from the beach and revealed a some calaveras or skeletons from long-ago battles here on the coast. Que chido! (cool!)

With that story still titillating our imaginations, we decided it was time for a beer. So we took the puppy across the sand to the only restaurant on the beach (there are a few more along the main drag as you go inland). We sat steps from the beach and enjoyed a most delicious ceviche de camarones (shrimp ceviche) and not a few cold Sols, along with botanas (Yucatecan h'ors d'oeuvres) and sun-dried tortillas. The puppy barked and played with the children of the families that began to wander in to enjoy their Sunday at the beach. We bought some delicious postres from the dulcinera who came by to sell us her homemade sweets. Bite-sized meringue-cookies with lemon filling that were like eating lemon-flavored clouds. And little balls of dough that she broke apart and filled with dark Yucatan honey. YUM! And then, before someone got hurt (you know what they say: "it's all fun and games til somebody pokes their eye out..."), we left to return to Merida. 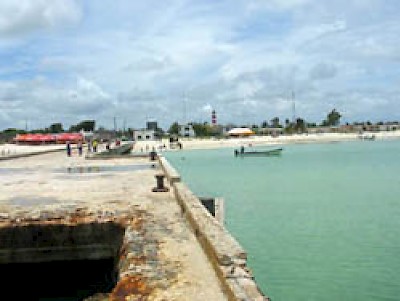 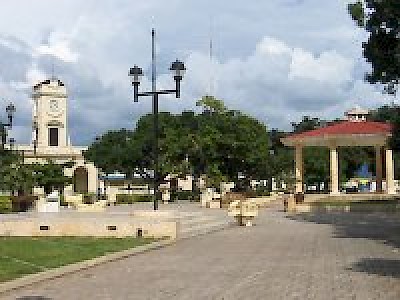 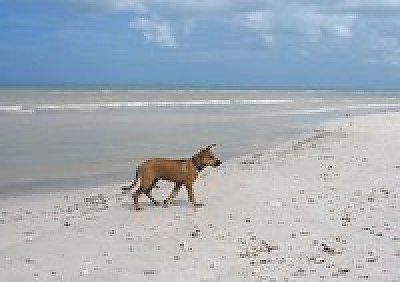