If you think about the art that traditionally springs forth from this part of the planet, it's typically large art. Pre-columbian Mayan art was executed in stone… big square pieces of stone with carvings, big stone pyramids, big stone snakes and jaguars. The Spaniards built massive colonial homes and haciendas in an attempt to make their own distinctive mark on this vast limestone tapestry of a peninsula. They built with big stone columns, huge wooden beams, massive stone walls. The art of Samuel Barrera, native son of Merida and 100 percent Yucateco, provides a complete counterpoint to the broad brush strokes left by Mayans and Spaniards. As he tells it, he strove from the beginning to make his art different from what he saw around him. In content, delivery and yes, even in size, he has achieved that goal.

Samuel (pronounced sah-MWELL) Barrera was born in 1967, the fourth in a line of six children raised in the south of Merida. His parents believed in education and he and his siblings graduated from local preparatorias and went on to college. Samuel attended UADY and graduated with a degree in law, while his brothers and sister became doctors, engineers and businessmen, making his parents very happy.  But Samuel wasn't happy with the law. During high school and college, he wanted to be an actor. For years, he stole time from his studies to be a part of the only independent theatre group in Merida at the time, run by Enrique Cascante. It was in theatre where he first experienced the magic of painting by designing and creating sets.

After graduation, Samuel worked in law for two years, always drawing and dreaming. Finally, in 1995, an influential Brazilian artist in Mexico City who was famous for offending his viewers by painting the Virgen de Guadalupe with the faces of movie stars like Marilyn Monroe, happened to see one of Samuel's drawings. He invited Samuel to have a show in Mexico City. With the financial assistance of Paul, Samuel's partner and personal Lorenzo de Medici, Samuel set about producing wooden crosses, each one designed and painted differently.

Encouraged by his Brazilian sponsor to do something "crazy", he decided to decorate 33 crosses in honor of the Day of the Cross (March 3rd) with designs from shamanic traditions including snakes, flowers and other natural elements. Before he shipped the crosses to D.F., he tried to show them in Merida. He knocked on many doors, but in this Catholic-influenced city (especially then), everyone turned him down. Finally, Don Miguel Madrid

who was in charge of the MACAY at the time, granted him a four-hour showing of his entire collection. Four hours was barely enough time to set up the crosses and show them to his family and friends, but Samuel did it and gifted a cross to the museum as a result, which is still in the MACAY's permanent collection.

Samuel's neighbor offered him the use of his truck, and the next day the 33 crosses were wrapped and carefully entombed in a specialized compartment in the truck although its usual cargo was meat and animal innards. Despite the container, the crosses arrived in D.F. smelling sweet and were set up early in the gallery for his show the next day. A performance group that was practicing in the gallery that night fell in love with the crosses, and on the spur of the moment, created a performance about and involving the crosses, which they performed the next day during the gallery opening. Their performance included covering the floor with tortillas and serving albañil-style food out of coffins. The opening was a grand success and half the crosses were sold before the night was over. The show continued for two months and gave Samuel all the validation he needed to quit law and move to Mexico City to become an artist.

For the next two years, Samuel sold his art in the parks around Mexico City. His crosses sold consistently and he was able to support himself with his art. Being a young, inexperienced Yucateco in the Big City, however, he fell in with the wrong crowd and eventually lost it all, returning to Merida to lick his wounds and start over.

If he had thought that now his art would be well received in his hometown, he soon discovered that nothing had changed. Two years of success in Mexico City meant nothing to the museum directors here, so Samuel took to the streets again and started selling his art in the Parque de la Madre outside of the Jose Peon Contreras Theatre.

Eventually, Samuel (again, with some assistance from Paul), decided to market his art in Atlanta, and there he found a following in the gringo market. By now, Samuel had moved on from crosses to canvases. But in his quest to always do something unexpected, he framed his paintings in distinctive iron frames (his father works in iron for a living and makes all his frames) and in antique wooden altars that are common here in Yucatan. His art is still carried by galleries and art sellers in Atlanta. Finally, however, in the last year or two, the local boy is also getting his due here in his hometown.

Of course, we loved Samuel's art the minute we saw it. We were captivated by the tiny brush strokes, the attention to detail, the whimsical metaphors and stories told by each painting. Our first favorites included huge turtles, painted like planet Earth, floating in a star-strewn sky, tied with twisted rope to balloon baskets swinging below, with a pie-faced moon looking on calmly from one corner and a placid but fiery sun watching from the other. When we finally met Samuel, our first impression was that he had stepped out of one of his own paintings, as small and finely detailed as they are, with a whimsical arch of his eyebrows and a ready smile that mirrored the feelings his paintings convey.

Because Samuel had never been formally trained in art school, he has never been infected with the tendency to do art for art's sake. His art demonstrates his opinion that art should not only be beautiful to behold, but laden with meaning and story. If there is any one artist from whom he has learned and who endlessly amazes him, it would be Salvador Dali. And though Sam's art is not Dali-esque, it is most definitely surreal. True to his intention, Samuel's paintings will delight you at first with their colors, their detail, their precision and their beauty. And then they will delight you later with their stories and their layers of meaning. Like another of his favorite artists, Remedios Varo, the stories told by his paintings grow in scope and detail with each extra viewing of the painting.

Even before he began to be recognized by the local authorities here in Merida, Samuel had started to finally incorporate some elements of his birthplace into his subject matter. His latest series of painting, which will be exhibited soon (see below), feature Mayan gods conversing with the Sun and Moon, perennial players in the theatre of Samuel's art. The series is about global warming and feature creative and somehow not-so-depressing depictions of our planet falling apart.

Samuel Barrera's story is about to come full circle. While in the last five years, his art has not hung in a single local museum or gallery, in the next four months, you can see Samuel's paintings in these shows:

Generaciones Contemporaneas (Contemporary Generations) at the Museo de La Ciudad - This show is for local, contemporary artists and opens on the second floor of the museum on October 25th.

Sietes Generaciones (Seven Generations) - at the MACAY, opening on October 19th. This show will feature art by both living and dead Yucateco artists, and Samuel will be showing his global warming triptych.

Collective Painting exhibit – in the hallway of the MACAY, Samuel will have three paintings in this collection. These paintings are an exploration of abstract painting traditions, but with Samuel's own added twist, of course.

Impulso Universitario (Universal Impulse) – This is an upcoming show held as a benefit to provide scholarships for local students. The exhibit will be at a location on Calle 62 between 45 and 47 and will feature all local artists and another global warming piece by Samuel.

And finally, in August 2008, Samuel will be having an individual show at the Olimpo where he hopes to show all new work. It is likely that we won't see much from Samuel until then, as his art is painstakingly produced; each canvas taking many weeks to create. To produce enough for an entire show will probably consume his time until then.

In the meantime, we can enjoy the shows and our own personal "Samuels" that hang on our walls.

Read more about the venues mentioned above in Yucatan Living's Art in Merida listing.

Samuel Barrera can be reached by telephone at 999-925-0425 or on his cel phone at 999-258-0190. Or you can email him at elanticuerpo "at" yahoo.com Samuel is currently represented in the United States exclusively at the Blue Spiral Gallery in Asheville, North Carolina. 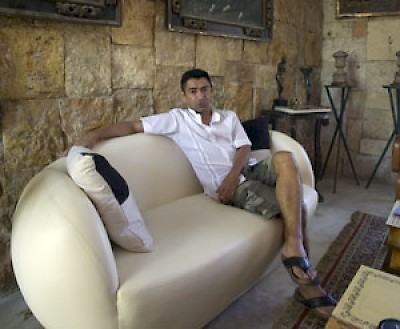 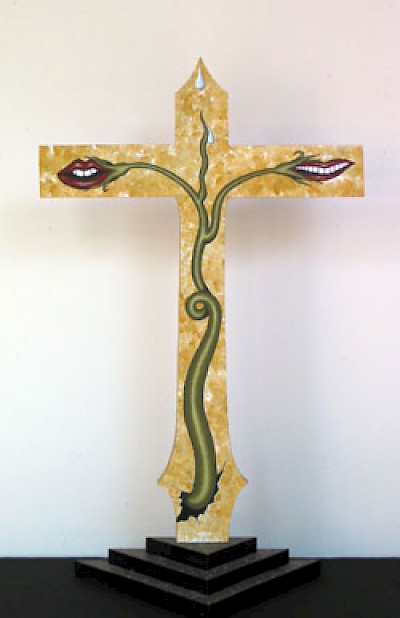 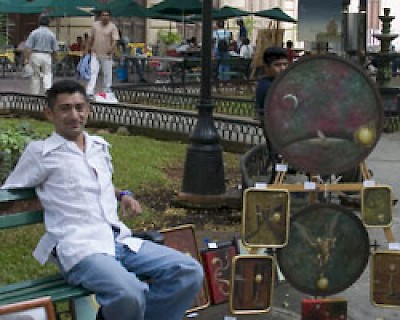 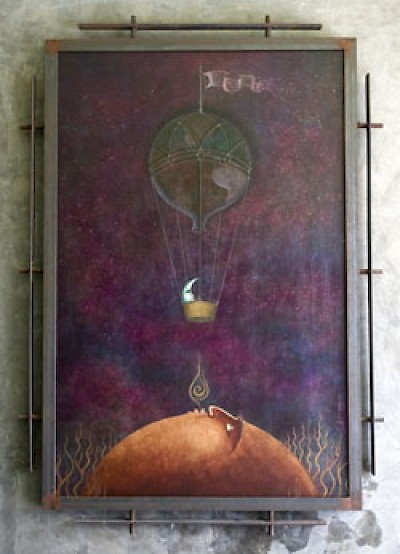 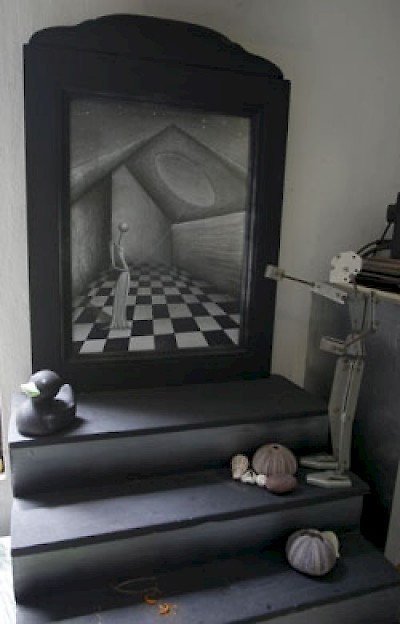 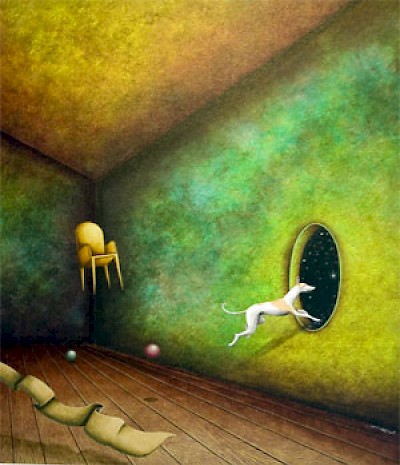 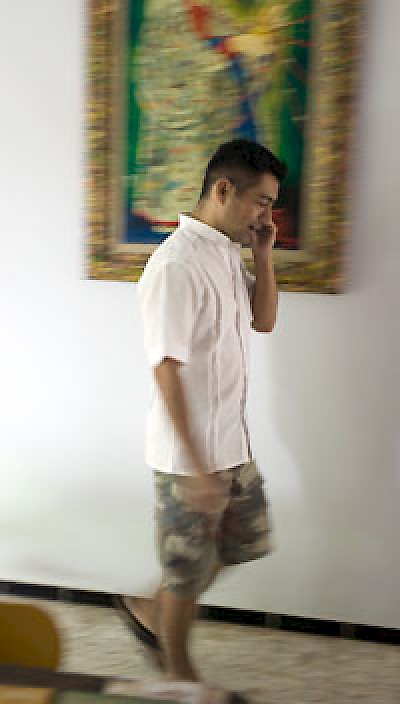