Princess of Yucatan: Prisoner of The Palanquin, Part Two

As this horrible certainty swept over the girl, the sweets she was tasting turned to ashes in her mouth. With a choking cry she leaped to her feet, rushed through the kneeling circle of tray-laden attendants, flung herself against the door. It was solidly bolted. Her eyes lifted to imprisoning walls that went up smoothly, sheerly, with slits for windows -- these high above her head at that. And in the dark, hard-faced attendants who knelt so suavely to serve her, she saw nothing of mercy. To these temple folk she was merely another victim for sacrifice whom they must treat softly and train carefully to her part because the temple law so ordained.

Day after day the life of the temple prisoner repeated itself. She was fanned and perfumed and served with delicacies that she would not touch.

Then, at last, under the strain of starvation and terror, her spirit broke, and she let them do as they would with her. Step by step, the dark-faced fan bearer, who was priestess of the robes, taught Nakah the things she must know for the part she was to play. Apathetically, the girl learned to walk with queenly grace beneath the gorgeous weight of jewels, and learned to wear the crown that meant death.

She must learn the bowings, bendings, slow movements of a ritualistic dance. She must master musicmaking with bell and cymbal and flute. Ei - a counterpart of the gods must be endued with every grace.

After the daily routine of training was over, she would move off and sit apart on a raised stone slab beside one of the great pillars of the chamber. Dully she waited for the end.

Then, one day as she sat thus, her listless hand tracing the carvings on the stone that supported her, something in the whorl and shape of the intricate chiselings on the porphyry beneath her sent a thrill to her heart. Seemingly mere carved adornments, these designs were in reality inscriptions in the old Mayan sacred glyphs known only to the initiate. From her long trainings under Copan, Nakah through her sensitive fingertips felt her way to the translation of one stone-engraved hieroglyph after another. She almost sobbed aloud for joy. In her dire extremity, this was like a message from her own people, handed down to her through the ages.

Like all the other buildings in the temple compound, this place of Nakah's incarceration had formerly been a Mayan seat of worship. Here in this chamber, the Aztec interlopers had overspread much of the wall space with representations of the serpent head of Kulkulcan, had carved his hideous trail on many columns, but a deal of the (to them unreadable) Mayan sculpturing had been left intact.

And thus from the past came a message to the imprisoned Nakah:

In the year Chac Chen I, Xultun, chief sculptor of the temple, laid this stone to the glory of our faith and in memory of Actun Xui, the prophet. His body lies in the cave beneath...

So far translated Nakah, and a great wave of hope shot thorugh her heart, almost overpowering her. A cave, beneath this very floor! Might it not mean a way of escape? Frantically the girl's fingers felt along the carvings, reading the glyphs in the way her blind grandfather had taught her.

Twice yearly, shall the brotherhood of the Holy Men of Itza go down into the innermost crypt to do reverence with offerings of spice and odors of incense. To roll the stone aside, begin with the outer graven square, count ten scrolls to the west, two to the north. Lift out the center of the carven flower thus arrived at. WIthin the orifice lies the key. Press--

Here Nakah's eager translating was interrupted. The door to her prison chamber opened. The usual procession of attendants entered, bearing the food, the perfumes, the music.

Carefully the girl hid her excitement, lowered languid lids over the glow in her eyes, assumed her accustomed impassiveness. But on this day, with the thrill in her blood, she ate well of the viands set before her. With the departure of the other attendants, the priestess of the robes began to array Nakah with more than usual care. A green mantle of featherwork, brilliantly iridescent, was laid upon her shoulders, a tiara set with a panache of plumes adorned her brow, a rope of pearls as large as grapes hung, many times doubled, from her neck almost down to the hem of her robe. As Nakah gazed upon the splendor of her reflection in the burnished bronze of the mirror set into the wall, terror shot through her.

"For the priestly inspection of Akahtabet," answered the woman grimly. "After that the second training, preparation for the march of the Festival..."

The march of death, that would be. Hope had loomed high a moment ago. Here in this room lay her only chance of life -- and now they were taking her away.

She swayed on her feet.

As her jailed turned toward cup and jar, the girl tensed herself for desperate action. It must be now... or nevermore. In one movement she swung off the great pearl rope, flung it about the other's neck and twisted, all the strength of jungle labor in her young hands.

Twist, twist -- that gurgling scream must never come forth. Hands ceased their frenzied flailing. The dark form slumped sideways to the floor.

Nakah bent low. The choked one breathed, lived. The gods be thanked. She wanted no death stain on her own soul.

The next second she was bending above the inscribed slab, repeating:

"Ten to the west"

Which was west? Sunlight through prison slits guided her aright. Frantically her mind strove to settle time of day, direction, strove to unravel cryptic rules. Fear made her a dullard. At any moment the throttled woman might regain consciousness -- or others might come...

"Two to the north -- the center of the carven flower! Let this be it, let me have counted right!"

...prayed the prisoner has her fingers struggled with the delicated chiseled center of a great stone zelote blossom. Ah, it turned, it moved! Desperately she twisted and at last the carved core of the blossom unscrewed in her hand. Into the orifice she thrust her hand -- pressed with all her might. Under her trembling effort, hidden stone valves began a ponderous movement, the coper holdings grinding in their sockets. It had been generations since the last moving of the slab.

As the stone rolled back, a narrow stair appeared, leading down, down into what seemed a bottomless pit. Stagnant air, laden heavily with old aromatics, drifted out. Fearful of what was below, yet more fearful of the perils of her present prison, Nakah snatched an incense torch from its wall sconce and sprang down the dark narrow stair. She had gone but a few paces, though, before she returned to feel for the under spring of the slab. Only with this shut would she stand any chance of escape. At last, the spring responded to her touch, and the great stone slid back into its age-old sockets.

With heart pounding in a tumult of relief and fear, Nakah passed down the ladder-like stair that led through the stone-lined burial vault. At every downward step, new terror filled her mind. Suppose this so-called cave was a mere well in the ground -- a pit with no entrance save the one in the temple floor! Shut in here, she would go to her death by slow starvation. But as she moved farther downward, this fear was somewhat relieved. The bottom of the shaft spread into a spacious natural cavern, from which tunnels led away in several directions. In the center of the underground room was set the carved tomb of the ancient prophet. Before it rose an altar of burnished quartz.

The little blaze of her torch sputtered uneasily. The only other sound was the whetting of her golden sandals in the soft, age-old dust. On and one, she trod through what seemed like miles of limestone passage, scuttling beetles and stagnant air. Then came the end -- a blank wall with no break or outlet. Wearily, Nakah turned about to retrace her steps. There were other passages. She would try them. But some of her hope had died. Before she could even return along that first vast passage, her torch, now burned down to a mere stub, flickered out, but she staggered on, often crashing bruisingly into the tunnel sides.

At last she came out into what she was sure must be the central burial cave. Carefully now, on hands and knees, she crawled along the wall to the next opening, and went on down into its depths. She went slowly now, hands pressed to the rough side wall. Old smells, vague ghostly shapes, seemed to float in the air before her. Hope dropped lower and lower. Finally, her strength gave out and she fell. Merciful stupor overcame her. She slept on for hours, perhaps for a round of the sun. What could mark time in that dismal hole!

Stay tuned to this website for the next exciting chapter in Princess of Yucatan! Read from the beginning here.

And yes, that is Jennifer Lopez in front of El Castillo at Chichen Itza (on a video shoot). 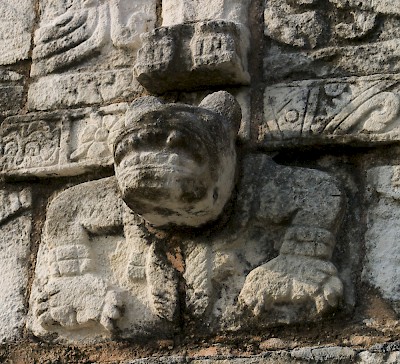 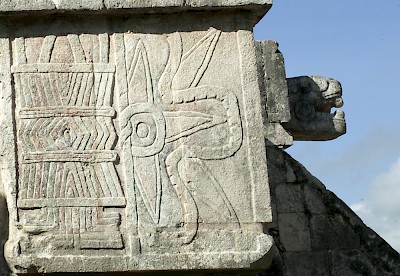 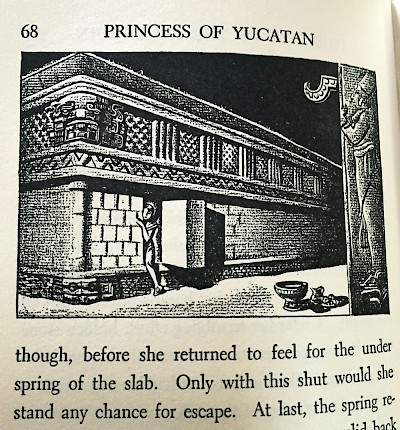 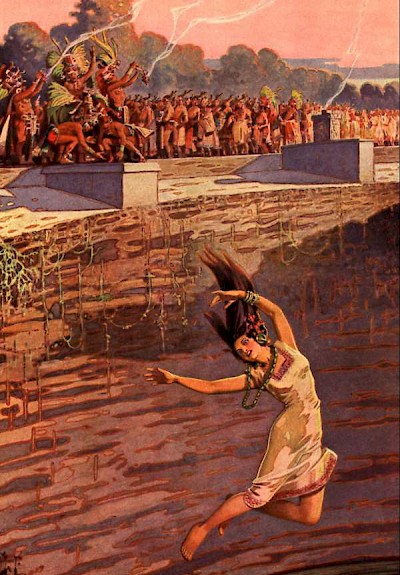 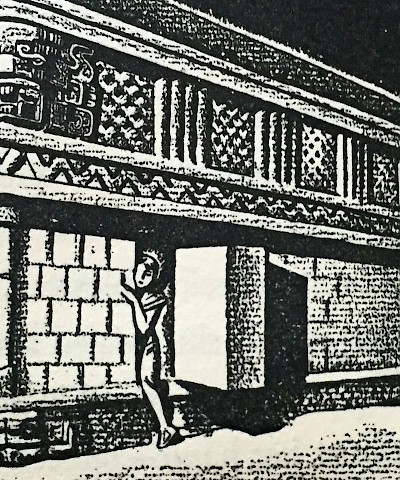 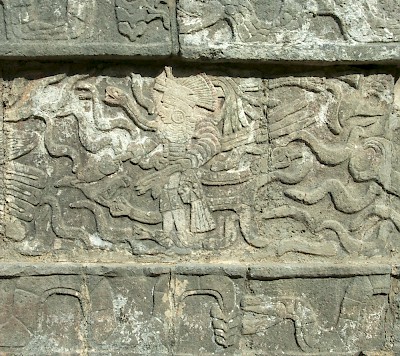 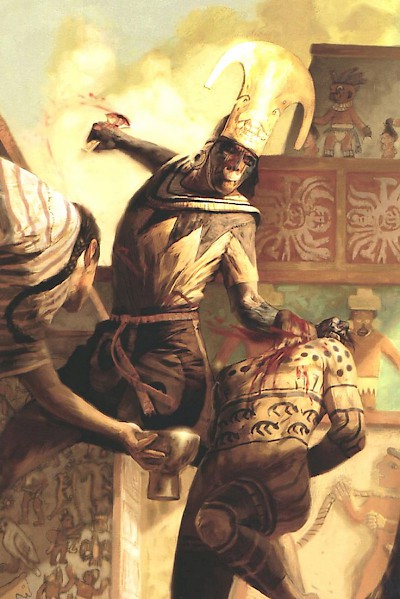 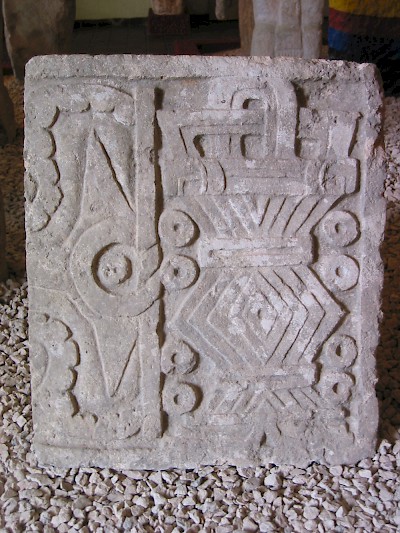 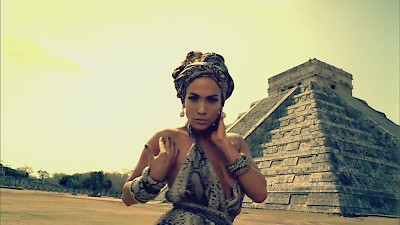