The first time we saw an Alberto Castillo painting was in a bedroom at Casa Santana, a B&B just up the street from where we live in the Centro. There, above the queen bed, is a huge painting of angels and other religious figures, executed in bright Renaissance colors in a somewhat but not-quite-naive style. It was so dramatic, so Mexican, so full of light and color, and so perfect in that setting. A few weeks later, we were commenting on a portrait of a friend in her renovated hacienda and found out that the artist was none other than Alberto Castillo. After that it seemed like everywhere we went an Alberto Castillo painting was hanging on the wall.

Any self-respecting gringo who had lived here for a while and a lot of native Yucatecos seemed to own one or more of his paintings.

Then about a month ago, we were invited to attend a party in Alberto Castillo's honor at a house in Colonia Garcia Gineres. Just about everyone we knew was there. People who owned paintings by Alberto were asked to bring them, and the hostess set up an impromptu one-night-only gallery showing of Alberto's works. Most of the paintings were portraits or tableaus executed in a style that seemed to mix Renaissance techniques with Mexican sensibilities. Surprisingly, there were very few works for sale. Determined not to be left out a moment longer, we bought one. Moments after the sale, a good friend of Alberto's, Jeannine Wolf, presented us with a photograph of the artist in his studio, painting our purchase! It's the photo at the beginning of this article.

Several weeks later, we scheduled an interview with Alberto in his home, which is located in the Centro, south and west of the zocalo. We were confronted with an old stone colonial house completely and literally overshadowed by a huge, old tree. Hiding in the dark but iluminated by a shaft of sunlight is the door to Alberto Castillo's world. The door is weather worn and signed by the artist as if a painting. We entered.

It took a moment for our eyes to adjust, but then a room began to emerge that is riotously decorated with photos, statues, paintings, overstuffed sofas popping apart at the seams, old magazines, stray pieces of embroidery, plastic flowers, mirrors, religious items... really too much to take in all at once. As we looked around the room, we also noticed an iglesia-sized crucifix hanging on one wall, an old electric keyboard lying on its side, tiger-striped throws covering the sofa and chairs, an old radio, hand-woven wall hangings, and an elephant-based coffee table covered with coins, letters, flowers, ashtrays and shells. The 87-year-old artist was trying to hang a portrait of Christ he had painted on a mirror, but he couldn't quite reach the nail on the wall. We assisted. And then we sat.

As the ubiquitous mosquitos buzzed around our ankles, we talked with Alberto about his work and his life in Merida growing up.

Alberto Castillo Ku was born in Merida in 1920 in a house near the cemetery at a time when Merida was filled with art and culture brought by the wealth of the henequen boom. However, his family was not wealthy. His father worked in a soap factory and spent his idle hours drawing with pen and pencil. Alberto remembers watching his father and knowing that he too wanted to be an artist when he grew up. His father was such an inspiration that Alberto still has all his drawings and brought them out to show us. They were mostly portraits of famous people, like Kruschev or Picasso, and they were good.

Alberto told us that in school he took to drawing very easily, and eventually all the other kids wanted him to draw animals for them. He began selling his art almost immediately, one drawing for 20 pesetas. He remembers that lions and tigers were the animals he drew best. Later, he attended an art school held on the second floor of a building overlooking the zocalo here in Merida. It was there that he cultivated a longing to go to Mexico City, where he eventually attended school over his father's protests.

Alberto loved Mexico City. It was beautiful and he was a young man entranced. He attended art school at the Academia de San Carlos, lived in the San Angel district and spent Sundays floating along the canals of Xochimilco. While attending school, he met and befriended Diego Rivera and his wife Frida Kahlo. "They were very nice people. They fought all the time, but they were very nice." Those were heady times in Mexico City and Alberto met a lot of interesting people, among them Miguel Covarrubias and (the original working gringa) Alma Reed. For ten years, Alberto lived in La Ciudad, barely surviving because even then, Mexico City was an expensive place to live.

Eventually, Alberto moved on. He went to Acapulco where he spent many years painting and running a restaurant out of his studio, which was located across the street from the most famous bar and restaurant at that time. Later, he spent seven years in Chippewa Falls, Ohio and some time in New York City. But he finally ended up back home in Merida, in his parents house where he lives to this day. For many years he continued his tradition of cooking and running a restaurant out of his home until his parents became ill and caring for them took up most of his time. They have passed on now, and he lives alone in a house where the memories are thick like cobwebs in every corner.

After a while, we were drawn towards the light in the back of the house. Past the dining room, with its expansive table decorated and set for dinner guests who would not be arriving, is the back porch where Alberto still paints. The light is better here, where the house surrenders to the back yard. The dirt and leaves from the garden skitter into the house with every breeze while the glittering detritus of the artist's interior life dances and weaves back out into the garden, left hanging from branches or half-buried in the ground.

In the garden there are sculptures, many of them falling apart and faded. There are handmade mobiles that marry brightly colored beer cans (Molsen beer cans are a lovely green) with stray pieces of multicolored plastic. There are old stove tops, stacks of old books, a sunken tub filled with leaves and lizards, and doors to half-built, hurricane-wrecked rooms. As the structures fade away, the garden takes over and the path leads to the very back of the property where a sacred ceiba tree grows. The ceiba, tall and sturdy and only nine years old, is where Alberto comes to think, drink and listen to music. There's a concrete bench in front and nailed to the tree is an elaborate cross, made of old protectores (wrought iron window protectors) and an Ojos de Dios (eyes of God) on which a handmade Jesus (a gift) rests.

The artist laughed and joked as he guided us around his kingdom. His grandmother married a pirate, and a bit of the yo-ho-ho attitude lives on in Alberto. You can tell he loves the chaos, the party, the riot of color and forms that have grown around him. He can't see as well as he used to, but he still lives every day as if activity and conversation were themselves works of art.

Alberto has always been quite the cook, and his restaurants in Acapulco and Merida were always popular. Between the great food, his interesting friends from around the world and his eclectic decorating style, we imagine a night at Alberto's place (his restaurant had no name, he says) must have been something to write home about. Some of the most interesting stories we've read about him are in a recently published biography and cookbook called Oaxaca to Yucatan by local expat, Lyman Morton. Mr. Morton intersperses his stories about Alberto with Alberto's recipes for Squash Flower Soup, Royal Chicken and many others.

As we left, Alberto insisted we take a copy of the cookbook. He had more, he said. As we tried to thank him, he left us with a saying that seems to sum up the life he has led and the world he lives in. "Don't say thank you", he told us, "say MORE!"

Oaxaca to Yucatan - People and Their Recipes can be found in the Merida English Library, at Dantes Bookstores (ask for it as it may not be displayed) or it can be purchased directly from the author for $100 pesos. Lyman Morton lives just outside of Merida in a town called Caucel. You can buy his book at the Merida English Library or call him directly at +52-999-953-0086.

Special thanks to Jeannine Wolf for coordinating Alberto's party and our subsequent visit to his home, and to her son Eddie Donnelan for some of the better photos above. And what do you know? We got an email from Alberto Castillo's grandson, who is also an artist. He lives in France, and you can see his art (which includes a book about his grandfather) at his website here.

Time marches on, and humans being human, things change. Our dear friend Jeannine Wolf died last year of cancer. And the artist Alberto Castillo has lost his ability to paint and has some health problems that have caused him to fall several times recently. Fortunately for him, his son and daughter-in-law have moved from Quintana Roo to live with him, care for him and repair his home. Still, he has no means of income as both his motor skills and his sight are failing him.

Jeanine DeWolf had requested before her death that the paintings she owned of Alberto's should be sold and the money given to Alberto. He has never needed it more than he does now.

Her brother Louie has released the two paintings you see here to be auctioned off between now and February 4, 2009.

Bids can be placed by sending an email to jacquelinenanwani@yahoo.com.

The paintings can be seen by contacting Scott at scott_yuc@hotmail.com.

If you are interested in art, we encourage you to consider owning an Alberto Castillo painting for your collection. 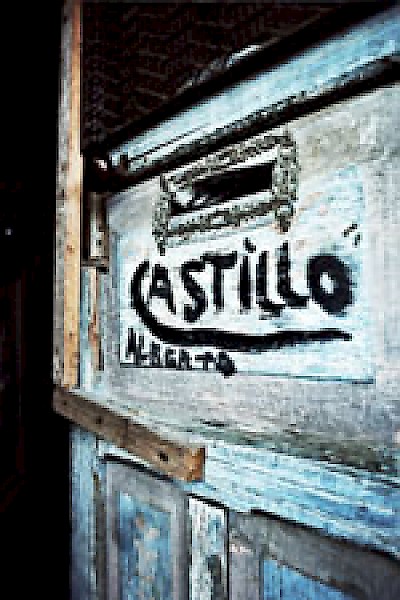 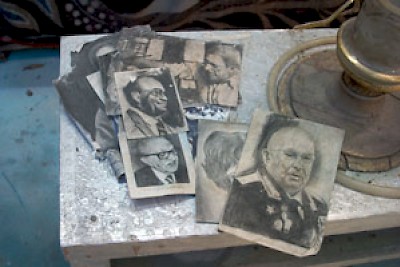 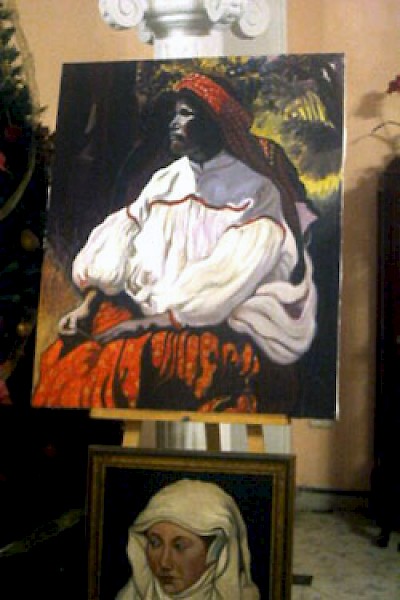 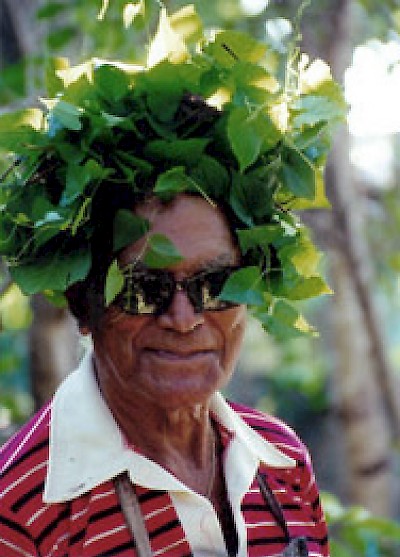 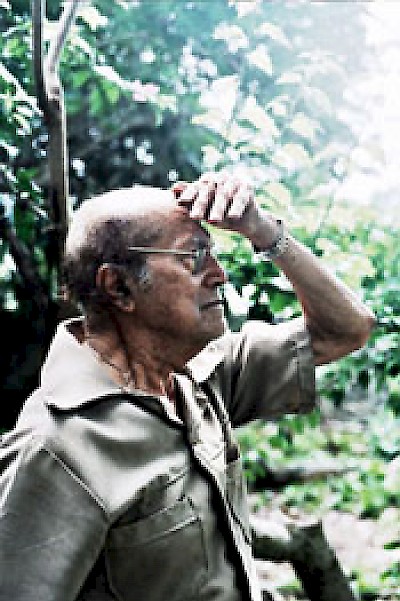 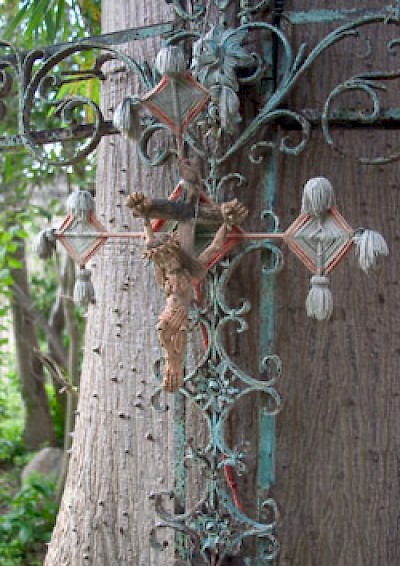 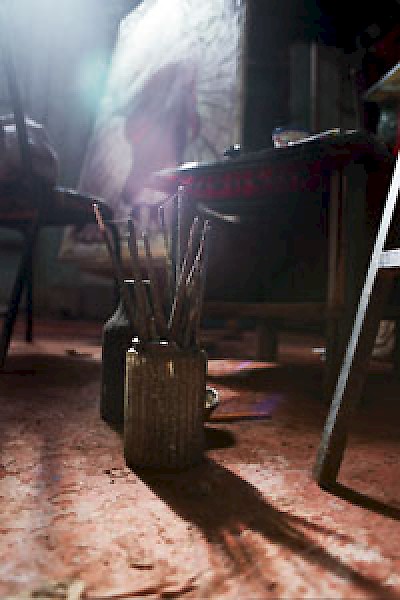 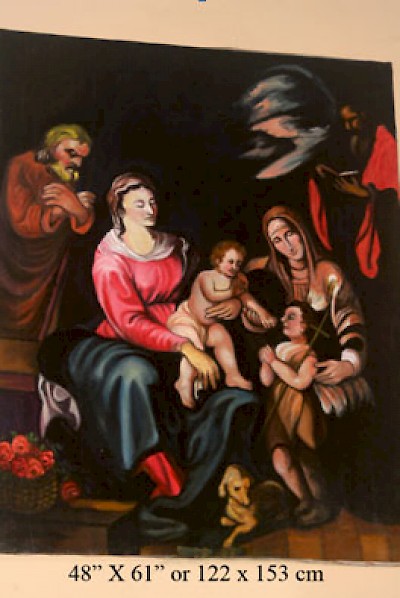 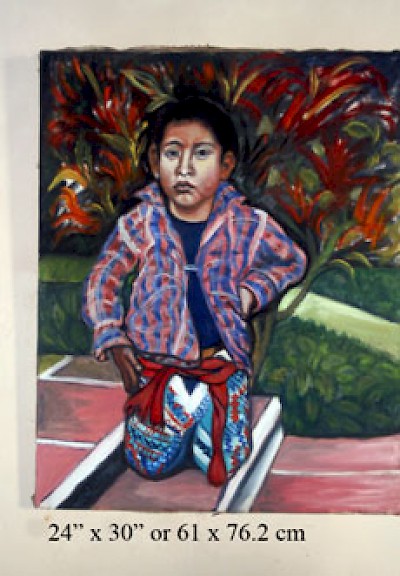