Whole Lotta' Art
We used to be able to get our arms around the art world in Merida… or at least think that we were doing so. We are not even laboring under the illusion anymore. With a profusion of new galleries, museums and artists, the Merida art world is getting busier, more colorful and more complicated… and isn't that a wonderful thing when it comes to art? There are so many newsworthy items right now, we thought it would be efficacious to write an Merida Art Update… so this is that.

The Absence of Sculpture
First of all, remember the sculpture exhibits that used to grace Paseo de Montejo for ten months every year, exhibiting artists from Mexico and another chosen country (Spain, Japan, etc.)? Well, there is not going to be one this year, and there are no plans that we know of to revive that 5-year tradition. There is a new party in power in the state, and they are busy planning and creating their own traditions.

Meeting with the Instituto de Cultura
Which brings us to another important item. Last week, Working Gringa joined about twenty other extranjeros in a special meeting with the Director of the Instituto de Cultura de Yucatan (ICY), the state-run department that is in charge of all artistic and cultural programs in the state. ICY covers everything from the various orchestras and dance companies to the theatres, music programs and workshops on everything from Taekwondo to puppet shows. We met with the director, Renan Alberto Guillermo Gonzalez and about six of his employees, including the head of Publicity, Jose Aviles Marin and the lovely Maricarmen Perez who is a singer at Jazzin' Merida on Friday nights and who, as an ICY employee, is now the newly anointed Ambassador for ICY to the extranjero community (as a direct result of this meeting).

The meeting was full of expressed gratitude (in both directions) and a few suggestions for improvement. Specifically, we asked for earlier visibility on events so that we can keep our calendar more up to date and get events on the calendar sooner, giving our readers and ourselves time to plan to attend. We feel confident that we will all be benefitting from greater cooperation and visibility in the very near future, and we're excited about that.

We also took the opportunity to educate the Director and his staff on some of the programs that we gringos are involved in that we feel they should know about. In addition to Working Gringa (who talked about the Yucatan Living website and the Yucatan Living Merida Art Map), representatives from the AANY program, the Merida English Library, the International Women's Club and the Yucatan Goldbook talked about their projects.
Another program was also presented by Cherie Pitillo and Greenwood, a seemingly indefatigable extranjero couple that have been living here for about two years now. They presented a very thick notebook with photos, captions and explanations about a promising and special art program called Purpura Plastika. This worthy program, run by young Mexican artists, teaches art in local orphanages, and we hope to be writing more about it soon.

He specifically mentioned the number of children who are taking music lessons around the state, the various children's orchestras and the system that is promoting music education called ORJUVE, Sistema Estatal de Orquestas Juveniles de Yucatán (State System of Juvenile Orchestras in Yucatan). He mentioned that each town has been given a representative who is tasked with seeing to it that their town gets the events and support that it wants. A program like this holds wonderful potential and we look forward to seeing what five years of this kind of attention might create in the state of Yucatan, for the children and for the communities as a whole.

New Artists
A walk along the Artists Market on Paseo de Montejo last Sunday (the first in a long time, sad to say…) turned up three new and very exciting artists. We met Agustín, a young man from Jalisco who studied art in Los Angeles, but has come back to Mexico to paint, draw and start an art school specializing in animation. His canvases were stunning, showing an adept hand at figure drawing as well as a good sense of color and, we must admit, we bought one. Then, just down the street a little way, we found Viviana Hinojosa and her novio (boyfriend), both artists. We would have bought another work of art on the spot if A- we hadn't already bought one up the road and had no money left and B- we hadn't found out about their upcoming show. Viviana and Miguel will be showing their works at a show coming in June at the new SoHo Galleries, and we plan to be there to make sure we get our pick of their work!

SoHo in Merida
Oh, you haven't heard yet of Soho Galleries? Well, if you haven't, you will. Adele, the owner of SoHo, comes from New York City (thus the name). She has brought her big city sensibilities and knowledge of art to Merida and she plans to use it to OUR advantage! She and her significant other, Nicolas Lavroff (a photographer) stock the gallery with new works from local artists, classic prints from a collection they have been growing for years, and they also offer giclee prints of many of the works in the gallery if you can't afford the real thing. We're excited about some of the upcoming shows and the energy that Adele is putting into helping Artists in Mexico put on a gallery faire in Santa Ana Park. When we know more about this, you'll be the first to know.

Gallery Tours, Guided and Self-Guided
Gallery owners are multiplying and getting creative too. Gallería Victoria just announced an art gallery and museum tour for tourists (www.meridagallerytour.com)… a great way to get an introduction to some of the venues for art in our fair city. The tour will be handing out the Summer 2009 edition of the Yucatan Living Merida Art Map, which will be available in about two weeks, chock full of new and old galleries in Merida and all the information you need to enjoy them. The Yucatan Living Merida Art Map is really a self-guided tour of the museums and galleries and other locales where you might encounter art in downtown Merida. A must for any serious art lover who lives or visits here. The art map can be found at the city information kiosks, the Merida English Library, various stores, restaurants, galleries and museums... and you can download it as a .pdf from the Art in Merida listings page as well.

Georgia Charuhas
One of Merida's favorite artists, Georgia Charuhas , has been working in watercolors lately and seems to be fully enjoying her Blue Period. She was honored this spring to be one of four Mexican women in an exhibition in Mexico City called Artilugios (Artifacts). The show, featuring works by Georgia Charuhas, Philippa Smith, Rocío Caballero and Pilar Bañuelos, was part of the Festival de México in the Centro Historico, celebrating 25 years of art in the Museo de la Secretaría de Hacienda y Credito Publico and the Antiguo Palacio del Arzobispado (that's a mouthful, isn't it? Those are two large historic buildings in Mexico City that now house art museums but once housed the tax collector and the archibishop respectively). Georgia is a world-class artist in our midst and we're thrilled to have her knowledge, talent and energy in Merida.

More Music
Another side benefit of the meeting with ICY is that Working Gringa sat next to Katalina McNulty. It seems that Katalina regularly wanders the streets of Mérida more than three people put together, searching out what's new and what's happening, and she has a special interest in music. She has agreed to become Yucatan Living's Music Correspondent for keeping our Events listings as full and up-to-date with music events as is humanly possible. Welcome, Katalina!!

Saturday Night
A piece of good news that the meeting with the ICY turned up. Remember those wonderful Saturday nights in downtown Merida, when the streets were closed off and chairs and tables put out and music rang through the air? Well, that wondrous event had mysteriously ended awhile ago, but we were told that it is starting up again as of last weekend. Welcome back, Corazon de Mérida!

Art is in the Air
Before we leave the subject of art for now, we would just like to call your attention to the blooming flamboyanes (flame trees) and their dance partners, the lluvia de oro (rain of gold) trees. Both trees, which are often planted next to each other, are in full and glorious bloom about now (May). You can see them almost anywhere, but a particularly spectacular drive is Avenida Itzaes, from the airport up to Avenida Colon. Red and yellow abound, and the sweet scent of the lluvia de oro is around the most unexpected corners. Love, art and spring are in the air in Merida!

Update: The Merida Gallery Tour is no longer available 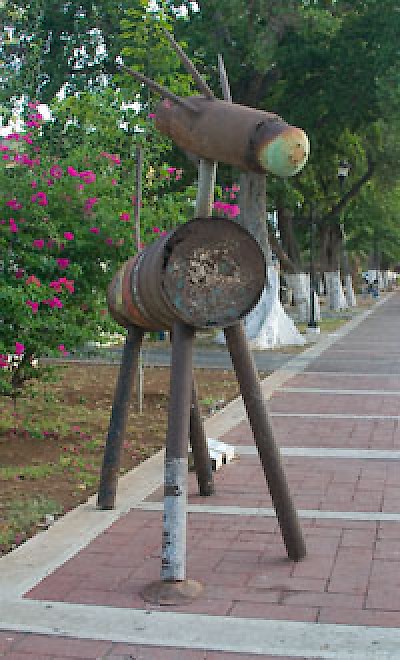 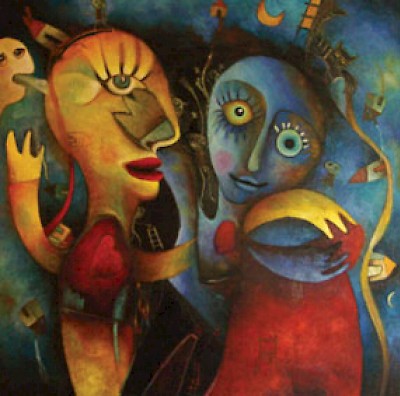 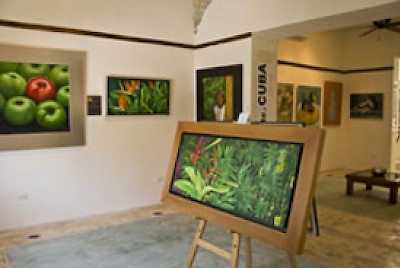 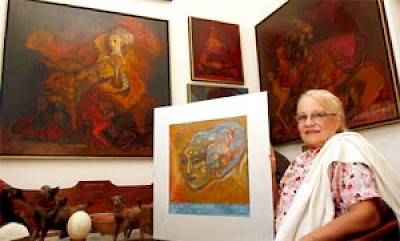