The lady who cleans our house once a week is named Brigida, a curiously Irish name for a Mayan in a huipile. But we figure it has something to do with the presence of the Catholic Church. Brigida is almost exactly our age, but she has lived a much harder life. She seems both older and younger than us at the same time. Brigida is married and has five children... four girls and her youngest, a boy.

Brigida and her family invited us to their daughter's quinceanos birthday party. For those of you who know anything about the hispanic culture, you know that a girl's 15th birthday is a sort of coming-out, a celebration of her graduation from child to woman. And its a big deal. The parties given for these girls can be huge! The dresses and table settings and all the accompaniments are as elaborate as a wedding. As our daughter put it, it's like a wedding but you don't have to get married.

The party was to be held in Oxtapakab, a very small pueblo almost an hour south of Merida. There is a hacienda there, still lived in by an old Mexican family. And about 200 families, in houses that face mostly dirt roads. There might be a streetlight or two, but the nights there are dark and full of stars.

We were told to arrive at the party at 8 pm, though the festivities didn't really get underway until at least 9 pm. But we've learned why that is. As the patrons of the family, they like us to sit down first, to be served first, and to eat first. We're uncomfortable with this, but its their tradition and so we go with it.

The party was held outdoors on a concrete patio between two square concrete block buildings which are part of a collection of buildings owned by this family on their plot of land. Included are a few traditional oval thatched-roof homes, called na in Mayan, pens for turkeys and chickens and an open air kitchen under a palapa roof. The family had contracted with a Luz y Sonido (light and sound) company to provide floodlights and very loud music.

The guests ranged from us, the token gringos and patrons, to older Mayans in traditional dress and their children and grandchildren, mostly in modern Western dress. The party girl was in a lovely pink chiffon number, her hair done up and her fingernails professionally painted. She and her sisters served us all a very modest meal. It consisted of an h'ors d'oeuvre of sliced hot dogs in a tomato sauce, chicken and tortillas, accompanied by as much beer or Coke as we could drink. There was a big fancy white and pink decorated cake for dessert, of course.

At one point after everyone had eaten, the 15-year-old, whose name is Soco, came up to the front of the crowd with her parents and godparents. After the music was turned down, there were toasts and kisses, laughter and cheering and clapping... and then Soco took her supposedly first drink of beer out of a decorated glass. The music started up again, and people began to slowly drift away back into the dark night. 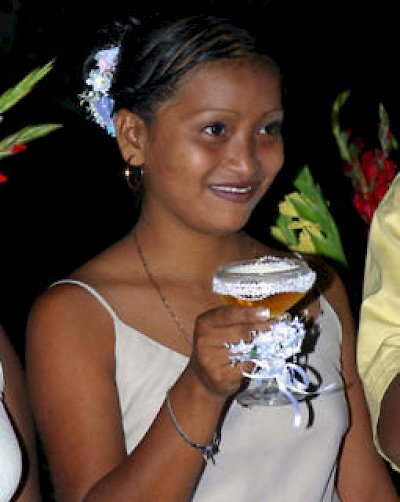