When you are looking for them, as we often do, and you enter the house of a man who makes knives for a living, the metaphors abound. If metaphors were knives, we would have been bleeding. And if they all were not so trite, we might have even started out with one or two. But talking about how this man is "on the cutting edge" or that we are bringing you a "slice of life" just seems to reduce metaphor to pun.

So we'll skip those and get to the "point".

In the Old Country, which in Jeff's case is Philadelphia, Jeff grew up an inner city boy. His interest in art started with photography, back when it was debatable if photographs could even be called "art". After high school, and a brief stint at a regular college, he ended up at Philadephia College of Art, where he was exposed to the art of metalwork. The possibilities of shaping metal into beautiful tools clicked with a childhood memory of a cherished circus pocketknife and his innate "fix-it" abilities, and he set about gathering the skill and tools to make knives.

His knife-making future might have ended when he left school, if it had not been for a chance meeting with a Mexican exchange student who befriended him and then invited him to visit a knifemaker she knew in Guerrero, Mexico. On a whim, he flew to Mexico and traveled with his friend by bus and private airplane to a small pueblito in the mountains. There he spent five days working with Don Primitivo Pablo Romano, a man who spent the days of his life making machetes.

During the day, Jeff watched as Don Primitivo and his brother alternated hammer strikes on glowing red metal that had been heated in a primitive brick oven, while Don Primitivo's son pumped the bellows to keep the fire hot. They started with leaf-springs from old cars, and they burnt wood they gathered themselves.

At night, Jeff and his friend bedded down with the fleas in the only spare space in the village, an adobe house with dirt floors. Corn for the next season was piled up in the corner and next to the bed was an altar where candles burned all night and day. Townspeople came at all hours into their room to visit with the recently-deceased relative who had died there a few weeks earlier. After five days of this waking Mexican dream, Jeff was ferried out again by the same small airplane, never to return (well, not YET, anyway).

A Dream in his Pocket

Needless to say, that visit haunted him and soon after he returned to the States, he had a vivid dream about Mexico and a life he would live there. He wrote down the dream and he put it in his wallet, where it waited for the next twenty-something years.

Meanwhile, Life happened. Ten years or so later, Jeff found himself married with two children, running one of the East Coast's first microbreweries. He and his partner had built the business from a small idea into a big business, and Jeff taught himself to be a businessman in a business that grew more competitive by the year. By the time things sorted themselves out, his kids were grown, he and his wife were divorced, the business was sold and Jeff was ready to write the next chapter.

One night, at a party, the conversation turned to dreaming and someone asked, "If you could be doing anything with your life, what would you be doing?" Jeff remembered the paper in his wallet and pulled it out and read it, thus beginning his journey that would end in Merida.

Perhaps Jeff began to leave Philadelphia that summer that he spent five days in the mountains of Guerrero. Perhaps it started even before that with the circus and the souvenir pocketknife, complete with a compass on the blade. Perhaps Mexico was in his soul from the very beginning. Ni modo... when he began to leave Philadelphia, he found himself headed instead for Miami. He wanted a warmer climate and a small space within which to renew his interest in making knives.

He had a place rented and plans to move when he stopped in Philadelphia on a busy highway in rush hour traffic to change a flat tire. At the back of the car, lifting the spare tire out of the trunk, he barely had time to turn around before he was apparently struck by a grey car barreling at him at more than 50 miles per hour.

We say "apparently" because to this day, he isn't sure what happened. He should have been pinned between the grey car and his own trunk. If pressed, he thinks partial credit for this personal miracle might go to the five or six years of yoga he had been practicing. He should have died. Instead, he found himself flat on the pavement a few feet away. A few hours later he found himself being released from a hospital emergency room with only a few bruises and a lawsuit in the making. A year later, after physical therapy, he found himself not in Miami, but on his way to Merida.

Lining Up and Falling Into Place

When Jeff came to visit Mexico, he met some people that introduced him to some people... you know how it goes. When you are going in the direction your life wants to take you, the stars align and everything falls into place. And that's how it happened that Jeff Ware now finds himself in a sunny home in Garcia Gineres, enjoying new relationships and friendships here in Merida. His daughter is married, his son is graduating from college and Jeff is going back to what he first loved... the magic of taking steel and shaping it into beautiful and useful tools.

The day we visited Jeff, he had a small table set up to show us his knives. Each one is unique, although he is also currently working on a set of twenty matching steak knives. The one-of-a-kind knives range from folding pocket knives to large butcher knives, and many variations in between.

Jeff sources his metal (stainless steel, because carbon steel rusts in this climate) from the United States, but all the wood and bone used for handles comes from local providers. He uses woods like ciricote, sapodilla and other local hardwoods. Some of the knives have handles made from cuerno de venado (deer horn) or cuerno de vaca (cow horn). Each one is engraved with his name and the name of the city where they were made. Some of them have special patterns and icons engraved on them by artist Manuel Taure.

We have to say... they are beautiful. We especially love the organic pattern Jeff carves on the knife's non-working edge... a delightful detail. We love that they are handmade here in Merida. We love that you can order one for yourself or for a gift. We love that when your knife is dull, there is an excellent place now to get it sharpened in a way that will not damage it.

Jeff's life in Merida has so far been as touched by serendipity as was his convoluted journey here. He told us about his search for a yunque (anvil). Anvils are solid blocks of steel... not something he could import like his kiln or the other equipment in his shop. Jeff wanted an old anvil... in fact, he had the romantic idea of finding an antique anvil, something difficult to find anymore in the States.

As it turns out, anvils are hard to come by in Mexico as well. Especially, we suspect, in the Yucatan as there is no indigenous source of metal here, and metalworking is probably not a particularly old art in these parts.

As it turns out, Jeff did find a beautiful old anvil, but the owner was unwilling to part with it. Disappointed, he went to the mercado and asked the sellers there if they could help him. One of them eventually took him to the home of his aged parents, where his father, once a metalworker, had an old block of steel half-buried in the backyard where he had used it over the years. No longer able to work, the father sold Jeff his yunque, which is now lovingly mounted on a tree stump in Jeff's backyard. We mused how much we appreciate the United States for how easy it is to find almost anything. But also how we appreciate Mexico for how magically things appear when they are called for, and how everything here comes with a story.

Who knows what happens next for Jeff Ware? He has told us he will teach knife-making at some point, and we look forward to his contribution to the arts community here in Merida. Whatever happens, his dream continues...

All About Knifemaking on Wikipedia

Jeff sells his knives at the AANY shows, or you can email him at jdclock@gmail.com 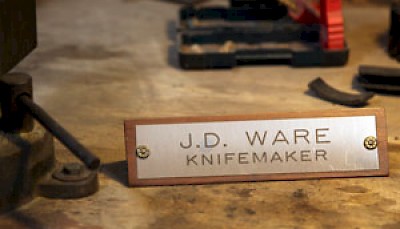 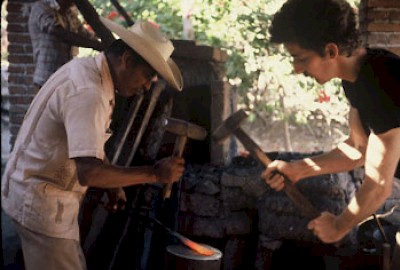 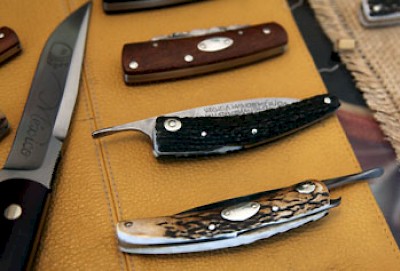 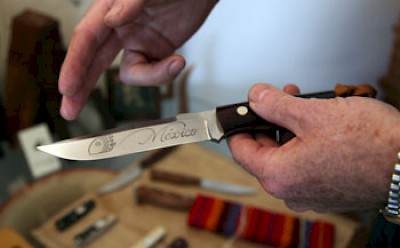 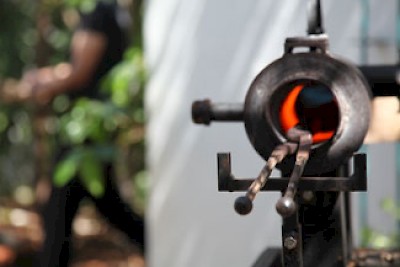 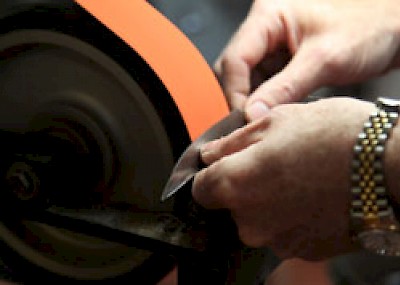 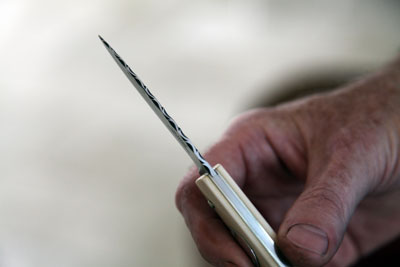 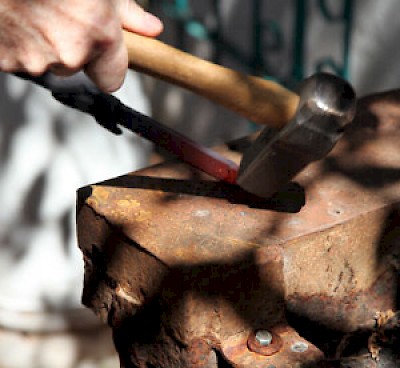