The name of her company here in Merida, Yucatan is Huellas Designs. Huellas means footprints in Spanish; it also means handprints, pawprints... in fact, it means something along the lines of "the evidence that we leave behind that proves that we were here".

Her name is Katherine and she is an artist.

One Foot In the Midwest

Back home in Ohio, Katherine had a typical midwestern upbringing. She and her sisters lived in a town where their father owned a restaurant. Katherine showed artistic talent in high school, and watched one of her older sisters go off to Yale Univeristy to study Fine Art. Contrary to the family's expectations, after graduation, the sister became a nurse. When it was time for Katherine to go to college, her dad was not inclined to pay for art school, so Katherine went to nursing school instead. She eventually added social work and liberal arts to her studies, but her father was adamant about one thing: No Art!

One Giant Step to the Yucatan

To be an artist is to be compelled to create something new and different. Artists are inventors and interpreters, and they are comfortable with pushing limits. That type of personality combined with the natural curiosity of a young adult doesn't tend to find satisfaction in a small midwest town. When Katherine and her sister went on a graduation trip to Cancun, she met Luis, the man who would later become her husband... and the trajectory of her typical American life changed forever. Before she knew it, she had left Ohio and moved to Merida, Yucatan to start a life with her new love.

That life quickly expanded to take up all of her time and attention. Together, Katherine and Luis had four children (now all teenagers or older), while Luis ran the Yucatan-based family business. That left Katharine running the family, raising her children, and learning to fit into the Yucatan culture, which left little time for the art that she felt born to.

Natural-born creativity, though, has a way of bubbling, boiling and escaping into any activity and what better place to apply creative ideas than in the service of raising children? Katherine started illustrating children's books for her own children. She worked on a park project in La Ceiba, where she was part of a team that turned an abandoned lot into a shady park with pathways, playgrounds and whimsical touches, including the cement dinosaur fossil feet... a foreshadowing of the work she is doing today. When Gerda Gruber announced her first and only class for sculpture in 2001, Katharine applied and, referencing the various projects she had created for her children, was accepted.

Although she had never worked in clay or any sculpted medium before, within two weeks of starting the class, Katharine knew this was what she wanted to do with her energy. The tactile expressiveness that the clay invited satisfied a hunger in her that drawing in two dimensions never had. Of the twelve people that started the class, Katharine was one of the nine who graduated.

Like others in the class, Katharine was ready to begin working at her art and bringing it to the public. But before she could get started, an opportunity arose for the entire family to spend a year in France and they took it. With no ability or time to set up a studio, Katharine reverted to home and child care when she wasn't traveling and soaking in the 24-hour-a-day art lesson that is Europe. Every museum, every garden, every plate of food was a chance to study and learn aesthetics, and Katharine returned to Merida, full of experiences and hungering to create.

She came back determined to make art her job. She set up her studio in the back of her house, took correspondence courses from the Academy of Art in San Francisco, and started working. The project for the park had piqued her interest in fossils, and the months in Europe had sparked a fascination for the impact that historical records have upon living people. She started working with a Cretaceous fish fossil from the pycnosteroididae family. The fish had died out in the Cretaceous era, 144-65 million years ago, and had left no descendants. The fish itself had originally been very tiny, only 4.3 centimeters long, but when she enlarged the fossil and recreated it in concrete, she was struck not only by its primeval beauty but by its journey. An imprint of its skeleton was all it had left behind, and yet, here it was again, an idea being brought back into existence. Lifted from its surroundings, isolated and enlarged, the fossil was bizarre, primitive and ghostly.

Encouraged by her results, Katherine's experimentation took two directions. She experimented in materials and techniques, while simultaneously experimenting in shapes, concepts and design. Her kiln wasn't large enough to hold the pieces she had in mind, so she began with concrete, learning the recipe from an albañile, and expanding upon it. She experimented with sand, ground stone and even saskab, a stone ingredient the Mayans used in building their monuments. She bought her own cement mixer, and experimented with formulas and mixing techniques. When cement proved to be too brittle for the large but delicate pieces she had in mind, she experimented with old newspaper, ground shells and other materials. She eventually turned to resin, adding in cement, saskab and pigments to expand her options for texture, color and finishes. The resin she works with now is not as ecologically friendly as she would like it to be, because it can be dangerous (she wears a gas mask to avoid inhaling the resin dust when she works). But resin provides the lightness and flexibility she needed to create the large, lacy structures that she envisioned.

Some of her latest work has been with butterfly wings... but wings so magnified and abstracted that they are not recognizable at first. The structure of the decoration of the wing informs the resin pieces... they can be mounted as sconces or sculptures on the wall, or used on a table as sculptures or even as a plate to hold fruit. Katherine has no preconceived ideas about how you are going to use her work. She purposely creates it to be both strong and light. Unlike the clay she started with, resin makes the pieces durable enough to do almost anything you have in mind, inviting you to join her in the neverending creative process. In fact, Katherine's art bends at times toward the practical, crossing that blurry line between art and design, and Katherine has no problem with that.

Her latest project began with the fossil of a fish called Seymouria, a reptile-like tetrapod (according to Wikipedia) whose skeleton is found in Texas. Katharine's stylized version of Seymouria is being rendered in resin, but Katharine is still experimenting with the right mix that will allow her to sculpt both sides, creating a three-dimensional representation of a two-dimensional fossil record. She intends to work both sides of the finished product, so the fellow's ribs and feet and other characteristics will be detailed on both sides. The end result will be a quasi-fossil, as if the animal it represents is itself rising out of the record it left behind millions of years ago.

With most of her fossil-based works, she starts from the photograph of the fossil, then draws it. From the drawing she forms a sculpture in clay and plastilina, from which she makes a silicon mold. The mold is used to make just ten reproductions, each one of which is then cleaned, polished, and detailed by hand. Each piece may also be painted and all are sealed.

She has created works in color, although most of our favorites were the ones in black, greys and white. She has created works with finishes that resemble bronze, stone or paper. Some of the works in her studio the day we photographed were multiples of her original fish fossil, a concrete version of an enlarged shell, a broken version of another fish fossil sculpture done on commission, multiple butterfly-wing sculptures in round, bent and linear forms, floral designs lifted from Nasstrom fabrics especially for their store, and the beginnings of the Seymouria series.

Her studio is filled with the dust of activity, and everywhere are molds, failed experiments, sculptures ready to ship and treasured remembrances. She finds herself with a studio that most artists would envy, looking out over the manicured garden, swimming pool and children's jungle gym that frame her life. Inside the frame, there is not a sedentary painting, but a three-dimensional menagerie that is shifting in time, magnification, color and material, straining to escape two dimensionality and history.

As many women do, Katharine admits to sublimating her creative ideas and desires to the daily responsibilities of motherhood and marriage. She created a beautiful, art-filled home with creative touches everywhere, but as many women have, she found herself straining at the millions of spiderweb ties that each day held her back from making her art. Now, with grown children, she is brimming with ideas and plans for larger sculptures, like one that will fill a room with the twisting bones of a serpent. She has placed some of her sculptural pieces at the local Nasstrom store, where they beautifully complement the modern furniture sold there. She has visions of integrating her designs into the walls of houses, or laying them end-to-end to become the walls themselves. Now finally, with education, experience, travel and time inside her and with her own permission, Katherine de Barrueta is picking up speed and momentum, quietly exploding into hypercreativity.

Like the woman who created it, Katherine's art speaks quietly. When Katherine speaks out in the world, she is a soft-spoken woman who seems to have effortlessly absorbed into her personality the famous Yucatecan graciousness. In her studio, where she opens her heart to her work and her ideas, she communicates her passion, her fierce love for the natural world and her even fiercer need to share the beauty of it with others.

Katherine's pieces are deceptively decorative at first. Like many things in nature, when you quiet your mind and spend time with them, they speak. They whisper of places and events far, far away in time and space. They invite a child's wonder for fossils and dinosaurs and butterflies and a scientific fascination for the worlds found in a microscope. And they pose the ubiquitous questions that we all live with, but seldom allow ourselves to ask... Why are we here, if the only thing we leave behind are these huellas? What is the impact of what we leave behind? Why does it matter and who does it matter to? What is it exactly that survives? And what will I leave behind? What will be MY legacy that someday, someone, somewhere will see and appreciate?

Katherine de Barrueta and her art invite us first and foremost, to enjoy their intrinsic beauty, lifted from nature and enhanced by the hands of the artist. And then her pieces invite us to question and reflect. And when we walk away, we find the pieces themselves and the questions they ask have left their huellas in our memories.

The Foundation of Gerda Gruber, Katherine's teacher and a local sculptor. Katherine's page

The last available of Katherine's original Fish Fossil pieces is available for sale at Colomer. 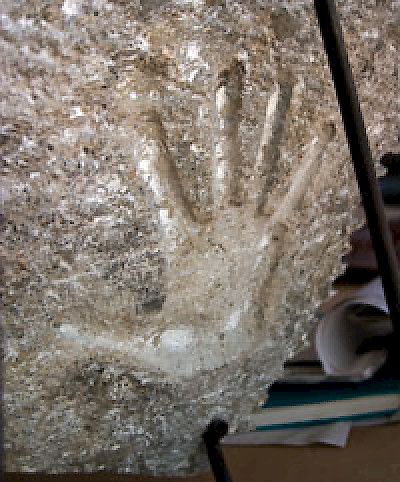 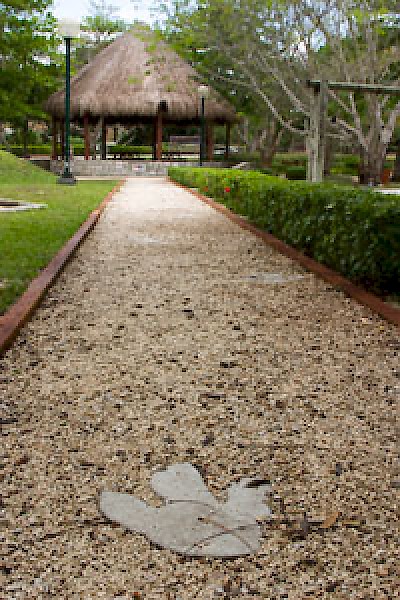 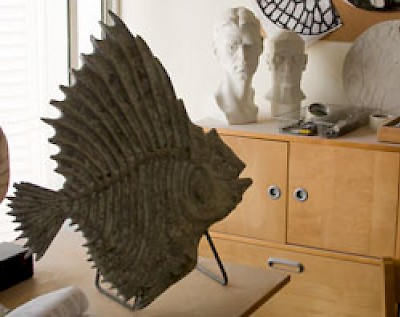 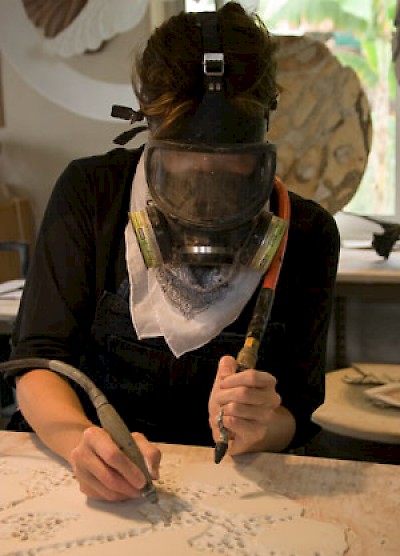 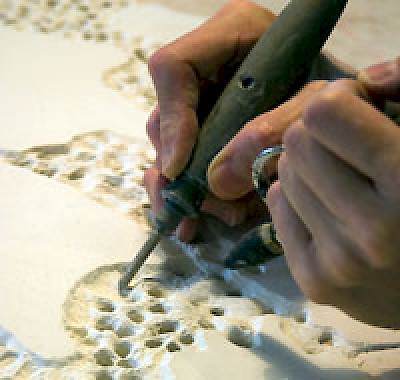 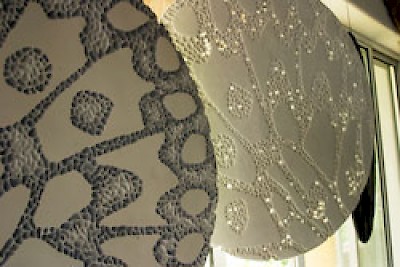 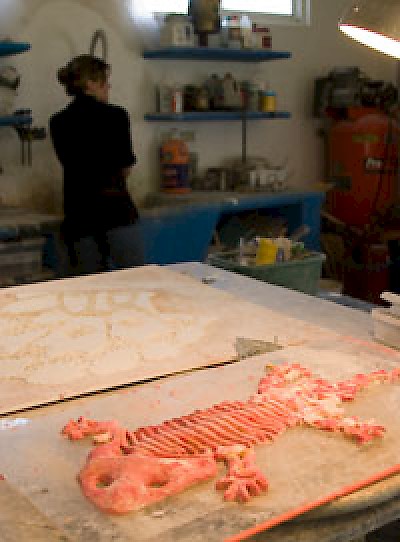 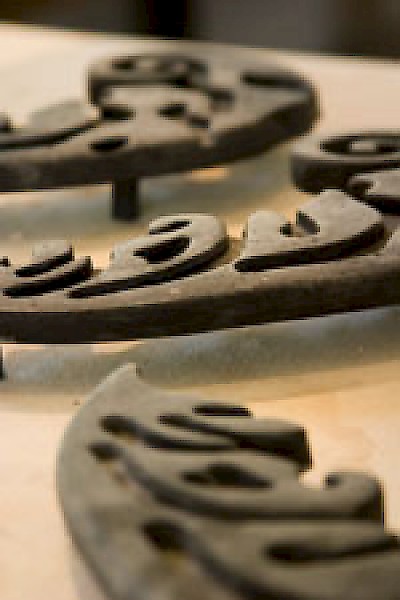 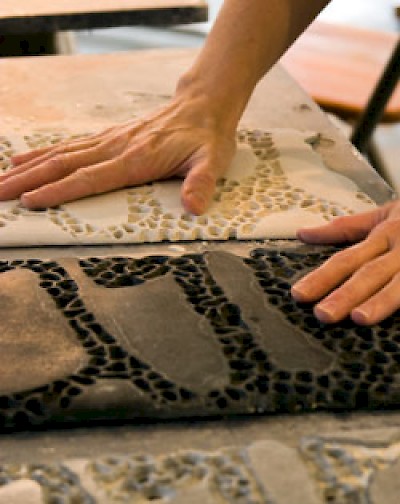 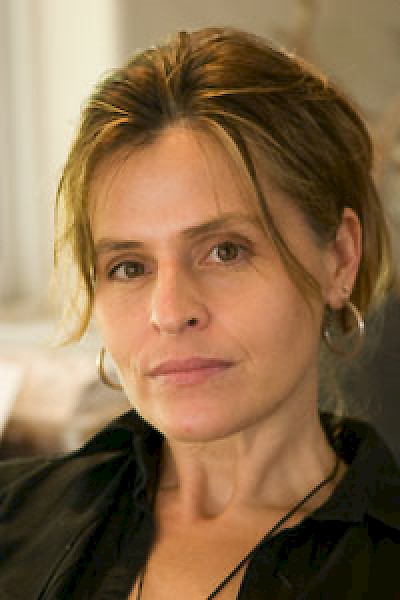